John uses his scientific & research skills (PhD) to develop and test reliable 'how to' guides and reviews about technology, equipment, apps

Recent research has suggested that climate change may increase sea levels by up to twice as much as previously predicted.

Recently research has suggested it may rise by one meter, about twice as much (100 cm; 3 feet).

Are They Any Engineering Solutions?

While there has been a lot of talk about what we can do to prevent it there has been relative silence on the engineering solutions to fix it - i.e. what can we do to lower the level of the ocean.

The Size of the Problem 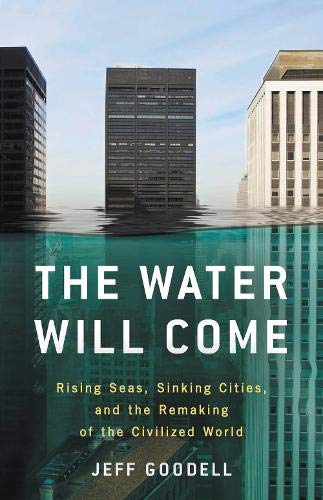 The Water Will Come: Rising Seas, Sinking Cities, and the Remaking of the Civilized World
Buy Now

At the outset the aim of this article is to provide rough estimates - ball-park figures - that ignore a lot of the detail.

Incidentally the volume of ice that lies on land in the Antarctic is about 24,700,000 cu km and if this melted it would increase the depth of the ocean by about 67m. Some of the ice there is actually below sea level and these areas would fill with water if the ice melted. See Figure 3 which explains the various type of ice. Incidentally the lowest point in the Antarctic is in the Bentley Sub-glacial Trench, which is -2,540m below sea level (full of ice). If the ice melted it would fill with water.

To get an idea of the size of the problem lets consider the idea of getting everyone on earth to do their bit. China has a history of using unorthodox means to eradicate pests. When Mao Zedong launched the 'Four Pests' campaign during the Great Leap Forward in the 1950s, citizens were ordered to kill flies, mosquitoes, rats and sparrows.

Lets say everyone was asked to kill 100 flies a day to control the problem. With a population of 1.3 billion that's 130 billion flies a day ( that's a lot of flies!).

Using this approach if we asked everyone on earth to collect a bucket of seawater from the ocean and to pour it onto dry land, where it would not drain back to the sea, how many buckets would it take per person to lower the sea level significantly?

This is equivalent to 100 buckets per person, per day for every day of their average lifespan of 70 years!!

Using Plug Hole around the World to Lower the Sea Level

If the sea level is to rise in our 'bathtub', can we find the equivalent of a plug-hole to drain some of the water away? This may sound silly but there are some ways of doing this.

1. Draining the water into areas on the earth that are below sea-level. There are many places on earth that are below sea-level (see the map and list). What if you could dig canals to these depressions and drain the water into them. What sort of difference in the ocean depth would that make? The results of an investigation of this concept are shown in Table 1 with the final figures expressed as the expected drop in sea level in miliimetres.

What are the Major Depression into which the Sea Could Drain

The only depressions which would make a difference if flooded are the Urfan Depression (21mm), Caspian Sea (29mm), Death Valley (2mm), Dead Sea (1.2mm), Quattara Depression (7.2 mm). Large areas in the entire area Dead Sea Depression (Jordan Rift Valley) that contains the Dead Sea, the Sea of Galilee, a portion of the Jordan River, and large areas of cultivated land and many communities could extent the area that could be flooded with seawater, but this has not be assessed. Likewise the large areas of the Salton Trough are below sea level surrounding the Salton Sea, but this has not been assessed.

Combining the 4 major 'pug-holes', listed above, and draining the ocean into these depressions, would only lower the sea level by 60mm. Most probably not enough to justify the expense!!

Would Evaporation from Depressions Increase Water Drainage from Plug Holes?

2. Evaporation - Many of the depressions on the land masses are below sea level because they have high evaporation rates. Would this mean that you could continuously drain water into them as the water evaporated? The evaporation rates are very high amounting to 1.4m per year for the Qattara Depression, 3.0m for the Turfan Depression and about 3m a year for Lake Eyre. However these annual evaporation volumes (water down the 'plug-hole') are not sufficient to lower the level of the ocean by more than 10mm in 100 years (Table 1).

The aim of the project is to convey water from the Mediterranean Sea in a tunnel or open channel, or both, use the natural head, and permit the water to be continuously removed by evaporation from the surface of the lake created in the depression. This particular type of hydro-electrical station, also known as a hydro-solar power station. The Qattara depression has a length of about 300km at sea level, a maximum width of 45km and an area of 19, 500 sq km. The lowest point is found at a level of about 34m below sea level. The target level was 60 below sea level. to which the corresponding surface areas were 13, 500 sq km, with an annual evaporation are of 19,000 million cubic metres, with a flow of 600 cu metres per second.

The scheme could produce up to 4000 MW per year and would be ideal for meeting peak loads. The lake would take about 60 years to get to the -60m level and would not fill-up with salt for about 900 years. From the water down the 'plug-hole' idea the question remains what happens to the water - does it end up falling and rain and draining to the sea? It would appear that much of the rain could fall in the desert in the surrounding areas and not drain back to the sea - the Greening of the desert.

Jules Verne - 'Invasion of the Sea'

Incidentally Jules Verne wrote a novel - 'Invasion of the Sea' which related a story that involved a group of westerners who studied the concept of flooding a low-lying region of the Sahara Desert to produce an inland sea to develop the area in North Africa. In the end an earthquake intervened and naturally created a natural sea.

There is evidence of a new sea being created in the famous Afar Triangle near the Horn of Africa. Two geologists recently watched a new ocean is forming with amazing speed. Just after they stepped out of their helicopter the ground began to shake and crevices began slicing towards them like a zipper opening up. In the Afar Triangle in recent months there have been large numbers of splits running across the desert floor, and the unstable ground has fallen by as much as 100 m (about 325 feet). Geologically speaking, that is after thousands of years, the Red Sea will probably flood the region and the new ocean will split Africa apart.

Would it be possible to excavate an area into which the sea could drain to lower the level - or perhaps dredge a large area of coastal seabed? Table 1 show the major world excavations including the Suez Canal, Panama canal and the recent Palm Islands project in Dubai - but the volumes extracted, though very large, are tiny in terms of what is required to lower the ocean level (Table 1). A rogue asteroid is probably the only way of doing this!

Sorry Folks - Back to the drawing board!

The size of the changes we have made to the sea-level of Planet Water, and are about to make in the next 100 years, are simply staggering!