There have been stories about an upright walking canine creature with a dog's head and a human body in Michigan at least since 1887. Even before that, the local Ottawa and Chippewa tribes had stories of humans that turned into animals.

While the stories circulated for many years, the legend became even more popular when a Michigan DJ wrote and performed a song about the Michigan Dogman back in 1987. The song predicts attacks by the creature to occur on the 7th day of the 7th month and, sure enough, there is at least one reported case of this occurring in Luther, Michigan.

So, let's take a look at some of the terrifying accounts of people who have reported to come into too close for comfort contact with this man-beast.

In 1993-94, a man named "Ben", in Grand Haven, Michigan is purported to have witnessed this Dogman while hiking at the Hofma Nature Preserve. While hiking he said he heard a sound and turned to look and saw what appeared to be a dog standing behind a tree about 70 feet away from him.

At another time, he said he was going to the car in his driveway and before he reached the car, a huge dog reared up from behind the car. In huge leaps, the creature ran away.

At yet another time, he was walking to the beach and saw the dogman snatch a deer in a clearing among the dunes.

Farther back, in 1938, a man named Robert Fortney saw the creature at the banks of the Muskegon River, but it also ran away that time.

In Ausable, along the Ausable River, another man claims to have seen this seeming Werewolf. He heard a bizarre howl, that sounded very deep with a human quality to it, while walking along the river. While camping, things suddenly got quiet, as if the animals in the area had been chased away, and the man spotted the Dogman about 100 meters away across the river. It was bigger than a bear and, as is usually reported, had yellow reflective eyes. It ran away, on 2 feet.

When he investigated the area the next day, he saw paw prints that looked like that of a wolf, but were the size of a bear's prints; upon further inspection he saw that they didn't point straight ahead like a regular wolf print but at angles like a creature balancing on two feet. In fact, the print were only in pairs, none of them in fours.

This same man recounts that when he was a kid, he had tracked these same kind of prints to a lady's farm where the woman reported that her chickens had been torn to bits.

So, there is plenty of compelling evidence that the Michigan Dogman does indeed exist. Possibly the most compelling and frightening evidence is a piece of film footage known as the Gable Film.

The Gable Film appears to have been shot in the 1970s, judging from the styles of clothes and hair and the vehicles in the film. The film was shot on 8mm film, the kind of film available at the time. It seems like a typical home movie through most of the film, people playing on snow vehicles, working on a truck, a dog running around and even acting strange and nervous in spots.

At some point there is footage taken from a driving vehicle along a road surrounded by snow and trees. A strange creature is spotted in the snow. The camera man gets out of the vehicle seemingly to get a better shot of the weird animal. Suddenly the animal charges toward him and then it appears that the camera is tossed around and ends up lying on its side. The film ends.

The film is disturbing, to say the least. It appears as if a day of fun turns to tragedy and we are witness to a horrifying attack by an unknown creature. Of course, the claim is that the film is a hoax. I'll reserve judgment because I don't doubt that there could be a cover-up of the facts or that the people owning this film don't want to be seen as crazy, so might very well claim it's just a hoax to cover themselves. You be the judge.

So, there you have it: Eyewitness accounts, a long-standing "legend" and film footage showing a very terrifying event evidently involving a wolf man.

The story of the Michigan Dogman has been around for many years and seems to remain a mystery. We will never know, unless we've actually see it for ourselves, whether the Dogman is real. As for me, I've seen stranger things and I don't doubt that the Dogman is out there.

Do you believe the Michigan Dogman is real? 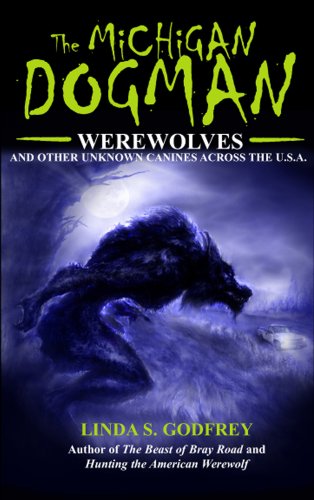 The Michigan Dogman: Werewolves and Other Unknown Canines Across the U.S.A. (Unexplained Presents)
Buy Now