The tragic death of 33 year old businessman and father of two, Peter Kurmann, while diving off Australia's southwest coast, brings the issue of deadly shark attacks back into focus.

The instant death of Mr Kurmann, after being savaged by a 13ft shark while diving off Stratham Beach on the 31st of march, 2012, has sent waves of terror through Australia, where surfing, diving and swimming off some of Australia's 22,000 miles of coastline is a national past-time.

Australia normally sees just one fatal shark attack per year, yet in the 12 months leading up to the end of March, 2012, Australia has now lost 4 people to shark attacks, all of them actually happening within a 7 month period.

In all 4 cases, a great white shark was suspected to be involved, although in the case of Kyle Burden, the type of shark may have been a tiger shark, and the shark that attacked Mr Kurmann has not yet been identified at this point in time.

As those sharks are protected, they will not be hunted down in any case, and the type of shark involved is more of passing interest than having any meaningful contribution to finding a solution to the growing incidents of fatal shark attacks in southwestern Australia.

There has been another horrendous fatal shark attack off the Western Australian waters.

24 year old Ben Linden from Perth was literally cut in half by the teeth of a massive great white shark, while surfing off Wedge Island, which is a family holiday destination.

Death would thankfully have been instantaneous, but was witnessed by several people who were actually in the water nearby at the time.

A man on a jetski attempted to rescue the remaining half of his body, but had to make a quick retreat when the shark turned its attention on him.

Unusually for great white sharks, it then returned to the body and disappeared beneath the waves with it.

There has been an unusually large increase in great white sharks spotted in the general area recently, much to the consternation of the people in the area.

Western Australia authorities recently banned shark tourism which has been changing shark behaviour in other parts of the world.

Great white sharks are currently protected under Australian law, but with 5 human deaths occurring in the area within the last 12 months, there is a strong case for organizing a shark cull, so that humans may bathe in the waters in relative safety. 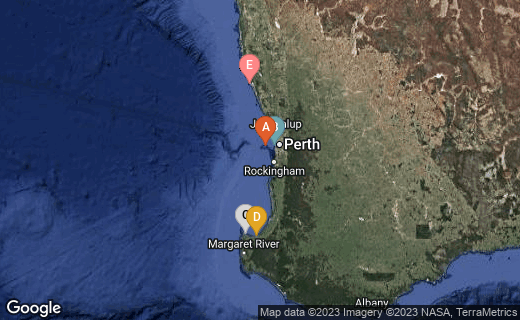 The area where George Thomas Wainwright was killed by shark attack

Where Bryn Martin was swimming when lost, presumed taken by shark attack

the area where Kyle Burden was attacked by a shark

The area where Peter Kurmann was fatally wounded by a shark

Kyle Burden was only 21 years old and "living the dream" having moved to the Gold Coast from Sidney.

He was attacked by a large shark on the 5th of September, 2011, while surfing on a body-board (a cut-down surfboard) off Bunker Bay, near Dunsborough in south-western Australia.

The beast came up at him from below and bit him in half before swimming off.

It has been of some comfort to his mother and family to know that death would have been almost instantaneous and he would not have suffered.

Kyle had been surfing with 3 friends, and it was they who hauled his body ashore and called for assistance, but it was too late. His injuries were terminal as he had lost the lower half of his body.

Other swimmers in the water that day reported seeing the dark shape of a bronze whaler shark nearby seconds before Kyle was attacked.

Bronze whalers, also known as copper sharks, have been known to attack humans but only in the presence of food, when they become excitable.

There have been 34 recorded attacks on humans by copper sharks in the past 100 years, NONE of them fatal.

Experts believe that the type of shark responsible for killing Kyle Burden was either a great white, also known as a white pointer, or a tiger shark.

There were no witnesses to what happened to him that fateful morning on 10th October, 2011. The alarm was only raised when he failed to return

A regular swimmer in the crystal clear waters off Cottesloe Beach, Mr Martin was last seen swimming towards a buoy about 380 yards from the shore.

Search divers later recovered his torn swimming trunks from the sea bed near the buoy.

Experts were able to determine that the tears in the trunks were consistent with the typical damage caused by a 10' long great white shark.

George Thomas Wainwright was a 32 year old American from Texas, who had been living and working in Australia for about six months before that fatal occasion when he was attacked by a shark.

On the 22nd of October, 2011, he was scuba diving off Rottnest Island.

He was underwater when a witness on the dive boat saw a large number of bubbles float to the surface, followed by the body of Mr Wainwright.

No-one saw the attack which happened on or near the ocean floor.

In the immediate aftermath, Australia temporarily lifted its ban on hunting and killing great white sharks (they are a protected species) but no shark likely to have carried out this horrendous attack was caught.

A 10' long great white shark was spotted in the area not long after.

On the 31st of March, 2012, at around 9.30am, Peter Kurmann was diving with his older brother Gian from a boat called Vampire, about a mile off Stratham Beach, which is about 150 miles south of Perth, Australia, when he was attacked by a shark.

His brother Gian reported having a seen a "dark, shark-like shape" in the water at the time.

Mr Kurmann died instantly from horrendous injuries, and his brother recovered his body from the seas.

The shark is widely suspected to be a 16' great white, although his brother was unable to determine the type of shark involved due to the murkiness of the waters.

Calls have been made by Busselton mayor Ian Stubbs for a shark cull, although this idea is being dismissed by Australian West Premier Colin Barnett who said:

"West Australian people love their beach but they know there's always that hidden danger; the ocean is the domain of the shark and we go there with a risk always".

However, he did not rule out the possibility of a cull taking place should this particular shark remain in coastal waters close to where people are, in order to protect children especially.

Peter Kurmann is survived by a wife and two small children.

Also known as white pointers or simply just as white sharks, the great white's favorite meal is not humans.

It is widely believe we are too bony for them.

They much prefer seals, dolphins and other large sea creatures.

Due to their great size and powerful jaws, a single nibble from a great white shark can kill us, depending where on the body we are bitten.

Great whites seldom come back to finish their human meal, their test-bite having told them that we are not the best food choice out there.

17 August 2010: Surfer Nick Edwards died after being attacked by a shark near Gracetown.

27 December 2008: Fisherman Brian Guest was killed by a great white while snorkeling at Port Kennedy.

19 March 2005: Geoffrey Brazier was attacked by a 6m (20') shark, believed to be a great white, while snorkeling near the Abrolhos Islands, off Geraldton.

10 July 2004: Brad Smith was fatally attacked by a great white shark while surfing near Gracetown.

6 November 2000: Ken Crew was killed by a great white while swimming off Cottesloe Beach.

20 January 1997: Windsurfer Werner Schonhofer was killed by what was likely to be a tiger shark in Geraldton.

11 September 1995: David Weir killed while diving for abalone near Hopetoun in the South-West.