KT Dunn is a Midwest native with a lifelong interest in history and mystery.

The northern Illinois sandstone cliff known as Starved Rock is part of a series of bluffs and canyons formed by melting glaciers thousands of years ago. Surrounded by acres of wilderness parkland, the rock was given its name based on a Native American legend. Louis Joliet and Father Jacques Marquette had journeyed to this area in their Mississippi River exploration of 1673, and they referred to the bluff as Le Rocher. In about 1769, Chief Pontiac of the Ottawa tribe (affiliated with the Pottawatomie, variously spelled Potawatomi), is said to have been murdered by a member of the Illinois-Peoria tribe during a conference which included all three tribes. To avenge Pontiac’s death, the Pottawatomie and Ottawa tribes engaged in battle against the Illinois (or Illiniwek), and in the process, the Illinois contingent was driven to the top of the rock and surrounded at its base. Here, with no source of food or water, and no way down lest they be attacked, they eventually died of starvation.

Starved Rock State Park became a national historic landmark in 1966. The lodge and its cabins were placed on the National Register of Historic Places in 1985.

With the passage of time, a triple murder in Starved Rock State Park 60 years ago has attained almost mythical status. It was March 14, 1960, when three women friends from the Chicago suburb of Riverside left the Starved Rock Lodge headed for the hiking trails. Lillian Oetting and Mildred Lindquist, both age 50, and Frances Murphy, 47, never returned to the lodge. Two days later, their bodies were found in rock-walled St. Louis Canyon, a scenic area of the park featuring a waterfall. The women had all been beaten to death, apparently with a tree limb, which was found nearby covered in blood.

Investigation finally led to a young man named Chester Weger, who was working at the park lodge as a kitchen employee at the time of the murders. Reportedly, Weger failed several follow-up polygraph tests after initially passing one and being called back in along with other employees. Eventually, he confessed to the murders, although he later retracted his statements and claimed to have been coerced by law enforcement officers into making a false confession.

A trial in the early part of 1961 led to Weger's conviction for the murder of Lillian Oetting and a sentence of life in prison. Persistent questions later arose about the identification of the killer and any possible motive, a controversy that continues to this day. Even though Chester Weger was convicted of murder after what some believe was a forced confession, and served one of the longest prison sentences in the state, opinions about his guilt are sharply divided. He was eventually granted parole in November 2019 at the age of 80, with release to be arranged 90 days later.

On February 21, 2020, Chester Weger was released from Pinckneyville Correctional Center after serving nearly 60 years for the murder of Lillian Oetting. He continues to maintain his innocence.

The Illinois Parks Commission acquired the land in 1911, and a state park was established the following year. Since the 1890s this area overlooking the Illinois River had been developed and managed as a resort by the previous owner, Ferdinand Walther.

The Starved Rock Lodge and Conference Center, with its surrounding cabins, was built during the 1930s as a Civilian Conservation Corps project, utilizing pine logs and limestone. The lodge projects a rustic elegance with its great central hall featuring an enormous stone fireplace, surrounded by a large dining area and hotel room wings.

Located between the lodge and the Starved Rock promontory, the spacious visitors’ center offers restrooms and respite, with a snack bar, vending machines, and souvenirs available, as well as park information and exhibits.

Located in north central Illinois, to the southeast of Utica and northeast of Oglesby in LaSalle County, the park consists of acres of untouched wilderness virtually frozen in time, and features a historic lodge and unique visitors’ center. Hiking, picnicking, camping, and boating activities, as well as trolley tours, are available to the visitor, in a setting of scenic bluffs and canyons, waterfalls and wildlife. After several expansions over the years, the park today consists of more than 3,000 acres of land with 13 miles of hiking trails. Trails wind through canyons and include boardwalks and wooden stairs to aid the climb in some areas.

From the top of Starved Rock one can see nearby Plum Island, home to an eagle sanctuary overseen by the Illinois Audubon Society, and the smaller Leopold Island. Other scenic overlooks, such as the Lover’s Leap Overlook and Eagle Cliff, also afford a view of Starved Rock itself and the Starved Rock Lock and Dam in the river below.

Lover’s Leap, of course, has its own legend. One version of the story involves two young lovers from different tribes (the Illiniwek and Pottawatomie) who were prevented by their tribal chiefs from marrying. Together, they leapt to their deaths from the the top of the bluff, which was thereafter known as Lover’s Leap.

Many of the 18 canyons in the park feature picturesque waterfalls, with the more dramatic being those of French, St. Louis, and LaSalle canyons. In French Canyon, hikers can walk behind the waterfall in its most active season, the spring and summer months. St. Louis Canyon is a popular destination with its scenic waterfall and is located one and a half miles from the Visitors’ Center. LaSalle Canyon, at a distance of two miles from the Visitors’ Center, boasts a waterfall that is active nearly year round, with sculptural icefall formations in the winter. 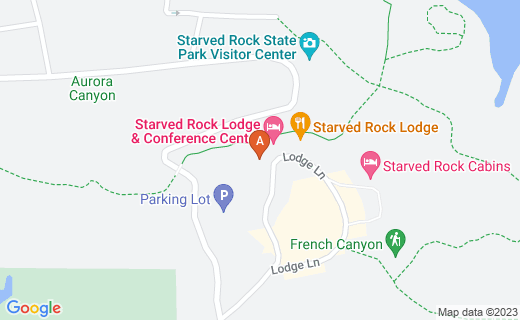