The National Foundation for Popular Culture is a nonprofit organization duly incorporated in August 1996 by the Department of State of Puerto Rico. The Institute of Puerto Rican Culture acts as a custody agency under the Corporations Act of Puerto Rico.

Culture is the characteristics of a particular group of people, defined by everything from:

The purpose of the National Foundation for Popular Culture is to advance the development of the Puerto Rican popular culture through the study, promotion and sponsorship of cultural events and artists that expose their works.

At the entrance you will find...

A smile and great knowledge of this piece of homeland

Location of The National Foundation for Popular Culture 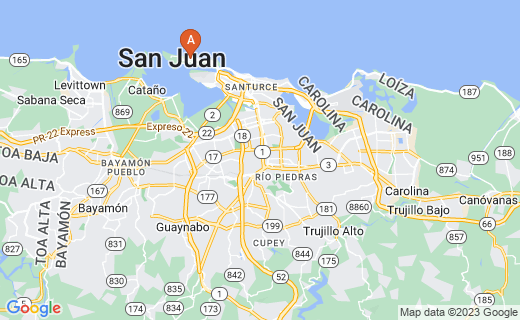 Important people in our culture

Objective of the Foundation

The goal is to organize, research, study, archive, publish, catalog, conserve, produce, promote, exhibit, exchange and disseminate knowledge about popular culture, classical and folk of Puerto Rico and the world.

This goal has prevailed against all kinds of odds. The effects affect positively and negatively any culture.The dream of many Boricuas has been the positive side that has launched their dreams seen in the National Foundation. A brief summary of some important actions in behalf of our culture are.

The founder of The National Foundation for Popular Culture Javier Santiago has been commissioned to keep his own dream (as well as other's) organizing information about events and influential people of the island, while providing artistic activities such as:

The building where the National Foundation for Popular Culture is, provides:

On the second floor is the School of Bomba y Plena of Doña Caridad Brenes de Cepeda, in which the founder Margarita "Tata" Cepeda shares her knowledge acquired in a career of 35 years.

On the third floor of the building, art and music classes are being offered.

Do you enjoy our past generation's culture?

What will you find?

A place to learn and enjoy

What is being done?

According to the objectives, the organization encourages and promotes awareness of popular culture, serving as a research resource and source of information for:

It is in Spanish, but the pictures and music are priceless

The video to the side presents the fourteenth anniversary celebration of the National Foundation for Popular Culture on August 13, 2008. The event was held at the headquarters of the organization in Old San Juan.

In this show you can see performances by:

The tenderness of the cats giving a special touch

Maintenance of a living culture

This generation must leave a legacy to future generations. Are you satisfied and concerned with today's culture to be representative of the quality of this civilization? Mahatma Gandhi quoted: "A Nation's culture resides in the hearts and in the soul of its people."

The National Foundation income has been reduced to some sporadic donations, since they have failed to receive legislative funding, nor had the support of Act 52 for the creation and maintenance of jobs from the Labor Department. The federal background in that count is used to pay the salary of Malu Seda, its only employee. Is this fair? We need to stand up for our culture's life.

Let's think about this and look forward to achieve distinctive patterns that may allow a positive response to the questions that will arise in the future about:

who, what, where, and when?

You are welcome to visit The National Foundation