Native American Nations in the Southwest: Oklahoma and Texas

Arizona and New Mexico Native American Nations were initially presented in Part VIII in this series. Here we display a number of additional pictures and videos regarding those nations to bridge the migration of native peoples across the American West and Southwest.

Those who became Native Americans migrated eastward as they required additional food and agricultural lands and spread their communities through Texas and Oklahoma onward into the American Southeast. Later, many of them moved back the other direction under Federal Relocation Programs.

Oklahoma is often called "Indian Country", because of the large number of Native North American groups placed on reservations in this state during and after the Indian Removals begun by President Andrew Jackson.

First Nations and Native Americans from Canada and the Pacific Northwest of the USA migrated east and south as well. As all of these nations and smaller groups - bands and pueblos and independent groups or communities - moved eastward and encountered European explorers and settlers.

These indigenous peoples also met incoming African slaves and peoples from the West Indies and intermixed with them, forming unique cultural segments of America in Metis groups and Creoles, Floridian native groups, and other such interesting ethnic groups.

The Southwest and Southeast cultures gave rise to a number of culinary disciplines that have become the foundation of education for some of the great chefs of today in the southern USA. The indigenous cultures and mixes took on certain characteristics of the environment, climate, and landscape as well as of nearby Spanish, Mexican, other European influences and the related cultures.

When thinking of the American Southwest, many individuals think about the famous Hopi Nation in Arizona or the mystical legends of New Mexican tribes. These are quite different from the many indigenous groups found in Oklahoma and Texas, just a couple of states to the east and still located in the Southwest.

At one time in the 20th century, the standard depiction of any Native American cost to coast was a man in deerskin jacket and leggings, wearing a Plains Indian feathered headdress, standing next to a teepee, tending a campfire, and having a tall totem pole. This image was really a composite of several tribal groups and not found at all in some parts of the United States.

The "Five Civilized Tribes" of Oklahoma

Dozens of Native American groups are located in Oklahoma in the 21st Century, with a full 60 nations having lived in this state at one time or another.

Many of the current native communities in Oklahoma are contained in the following federally-recognized list. This does not include non-federally recognized or state-recognized nations or totally unrecognized groups.

Map of Native Reservations Across Texas 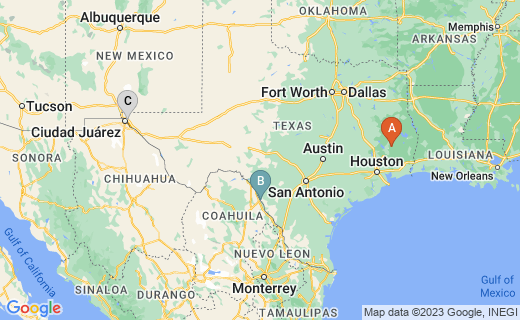 Texas Reservations: The Alabama-Coushatta Reservation lies east of Houston, and the Tiguas and the Kickapoo reserves both lie in Rio Grande Valley.

The original nations we have found thus far who have lived in Texas include:

Other nations that were driven into Texas by Euorpean settlements include: