The People of the North

In Russia, there is a group of remarkable individuals popularly known only as "The People of the North" and their relatives live in the northernmost parts of Canada as First Nations and Native North Americans.

I am totally in awe of such individuals that know how to survive without modern conveniences in temperatures of -75°F. People that can survive Mother Nature at Her worst can surely survive anything and win any battle or any challenge. They must be the epitome of survivors, along with long-time Prisoners of War (POWs) that make it back from inhumane captivity alive.

Some of these First Nation individuals in Canada are the Canadian Inuit ("The People") and are related to the Russian Inuit and the Greenland Inuit.

On the Circumpolar Map below, the "Others" listed are the additional groups living in the Arctic and these may be closely related to any and all of the Inuit people.

One item that does, in fact, relate of the the Arctic Peoples, whether they be Scandinavian, Russian, Asian, or First Nation, is the legend of the sunrise. In the western part of the Eastern Hemisphere, reindeer are said to pull the sum up every morning to begin a new day. As we travel eastward, the reindeer becomes a dragon that pulls up the sun each day.

All of the People of the North around the globe live by catching sea mammals, caribou, and fish for food and sales. Snow and ice Igloos are their primary winter residence, along with some wood huts. Summer reveals tents of caribou skins for housing. Dogsleds and huskiets or malamutes are used for hunting. Weapons were were first made form ivory and bones, with metals added later. In more modern areas of the Arctic, the Inuit actually use snowmobiles and rifles.

The Inikshuk shown in a photograph above is a tall stone land marker that reminds us of Stonehange in a way, built of stones piled on top of one another in a stack.

The Inukshuk is used as a directional marker by the Inuit, because there are few landmarks to use as reference in the land of permafrost and snow. Among a white background and ground, the stone structure is visible to travelers in the snowfields, going by sled and snowshoes.

The directional markers are important to the culture of the Inuit, who consider them in daily life very seriously. The structures are built only with good reason and they are scrupulously maintained in order for travelers to have reference points to guide them in the wilderness.Without them, travelers could become easily lost and die.

Inukshuk means "to stand in for a person" and even looks like a man or a statue of a man, pointing directions. The structure is important enough to take center place in the Nunavut flag.

What is an Inukshuk?

This is likely the most interesting and awe-inspiring place in Canada.

Nunavut is the largest and newest (4/1/1999) of the organized territories in Canada, and home to Inuits. Baffin Island in Nunavut is Canada's largest island and home to the provincial capital of Iqaluit. The province was formed with the thought of returning land and government to the First Nation, specifically the Inuits.

Baffin Island has been home to first nation peoples for over 4,000 years, some of whom may have met visiting Norse explorers and vikings around 1,000 AD, but this is uncertain.

In Nunavut, the Inuits speak Inuktitut, Inuinnaqtun, English, and French as officially recognized languages. 85% of the people (about 23,000) call themselves Inuit, so this province is predominantly a First Nation province. The province covers nearly 2,000,000 square kilometers. 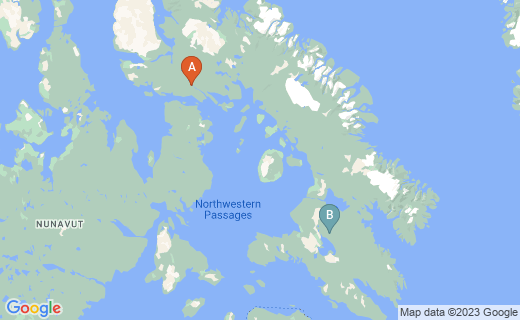 The Inuit Organization for Four Regions

The Yellowknife Indians are also known as the Tatsanottine. These people are Athabaskan-speaking, having lived northeast of the Great Bear and Great Slave Lakes for some time. The name Yellowknife comes from the copper knives and other tools that this nation has used.

Life in the Northwest Territories 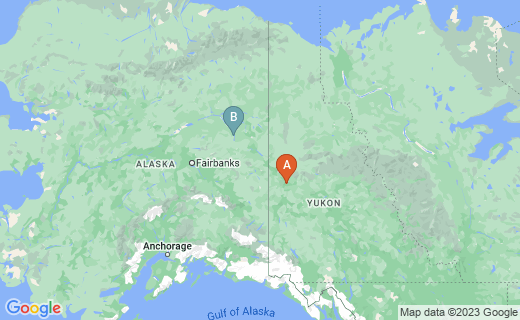 About the Yukon and gold, by Hubber Rolly A. Chabot

Cross Claims
Prospectors still work the Yukon fields and this story highlights the thrill of the experience and life-affirming good deeds of a pair of prospectors.
Buy Now

Highlights of the Han First Nation

The Han Territory straddles the Yukon-Alaska border along the Yukon River approximately 20km south of Dawson and northward to Circle, Alaska in a wide northwest to southeast diagonal. The Han (translated as People of the River) in Canada were displaced by the miners of the Klondike Goldrush in the early 1900s and Chief Isaac led his people in the Yukon Territory after their displacement.

The descendants of Chief Isaac's group recently formed a commercial division, known as Chief Isaac, Inc. This company includes legitimate shareholders, 100% of whom are all from Dawson City in the Yukon.

Ice Floes Under The Midnight Sun

Land of the Midnight Sun

On June 21st every year, the Summer Solstice, the sun never sets at all in parts of the Yukon. The "midnight sun" creates longer summer days with red and magenta skyscapes that hypnotize viewers.

This poet and former bank knew about survival without the skills that the Inuit possess.He nearly perished in the Canadian Yukon and had a great love and respect for the North.

Sometimes called The Bard of the Yukon, Robert Service along went with the Yukon Goldrushers and lived in a cabin in Dawson City as he wrote about this frontier and its people.

He wrote volumes of poetry, including an ode to the full moon that saved him out in the wilderness one cold night with it's directional glow.

Service also wrote such famous poems as Song of the Sourdough, The Men that Don't Fit In and many others. His WWI poetry was used in trauma clinics during the return home of injured Vietnam Veterans.

How the Moon Saved Service

I learned at a poetry convention that Robert W. Service was in the Yukon during the winter and one dark night lost his way. The moon was not visible. He later wrote a poem to the moon, because it suddenly appeared and its light guided him to safety.

The hostess of the convention memorized every word of Service's entire works and recited from them all weekend. She also recited The Face On the Barroom Floor, because while often attributed to Mr. Service, he did not write it. Mad Magazine published a parody of that poem.