Heritage of the Inca People

The Incas, who spoke/speak Quecha are the major indigenous people that lived in Peru, while Indigenous natives and descendants in South America still speak the language widely. They may be closely linked with the Native Americans and First Nations that immigrated to the Western Hemisphere from the far northeast over the Bering Land Bridge long ago.

Many of these Indigenous Peoples chose a southeastern route in search of new food and living resources and settled at the most southern tip of South America in Argentina. Meanwhile, some historians and archaeologists believe that South Pacific and even New Zealand peoples rowed eastward from their origin lands and joined those in what is now the western boundary of North America.

After all of this, some of these original South Americans avoided Spanish and Portuguese conquest to travel northward, likely all the way up into the Ohio River Valley and perhaps beyond. At least, so say some anthropology courses. Eventually, most of the people experienced the unofficial rite of passage that was First Contact with white settlers: the French and British, along with some Germans and formerly the Scandinavians that were the earliest European explorers of the New World before Christopher Columbus.

The Incas, who spoke/speak Quecha are the major indigenous people that lived in Peru.

By AD 1200 the noble and exceedingly strong Incas had already built a lavish capital city of Cuzco, with Machu Picchu in Peru.

The 13th century civilization was complex even more than 570 years before the 13 British colonies became the USA.

Christopher Plummer starred as an Inca in a film about their culture called The Royal Hunt for the Sun. He played the god-chief Atahualpa, captured by explorer Pizarro and held ransom for all the gold in town.

The film portrays Pizarro as repentant after he becomes friends with the chief. In real life, the Incas were destroyed in the 16th century by Franco Pizarro and only 180 of the explorer's men. Plummer plays a strong and charismatic role that I have never forgotten.

As of the mid-15th century, the Incas had conquered several other Native South American Nations. Their realm of control ranged from the Andes Mountains (see the maps) across Peru, into Ecuador, Bolivia, and scattered thinly elsewhere.

The white llama is a holy animal in the Inca religion, sacrificed to the sun-god. Coca leaves are chewed for religious hallucinations. The llama lungs were read like tea leaves for fortunes.

Children were also sacrificed on the altar, their hearts cut out while still alive. Up to 200 at a time in the event of a war defeat, famine, widespread illness, etc.

Perhaps the Incas became infested with the white-man's diseases and sacrificed the rest, praying for a cure that did not come. Young women were also sacrificed. If they had been honest, good, and industrious, they went to the sun for their afterlife. If they were bad and lazy, they went to a cold earth-world.

The Sapa Inca is the title given to the emperor of the Inca kingdom. In history, there were found fourteen Sapa Incas, but the final one before the fall of the civilization was Atahualpa, the 13th emperor played by Christopher Plummer on film.

Taquile is located in the enter of Lake Titicaca and a festival is commemorated by Inca descandants there every year. Th epeople of this island preserve the ancient Inca ways, weaving brilliantly colored cloth, speaking the Inca language, and tending fields and livestock.

On Festival days, the people meet in the plaza and dance to wooden pipes and drums. It is the Feast of St. James today, but used to be the Feast of Illapa the Lightning God. 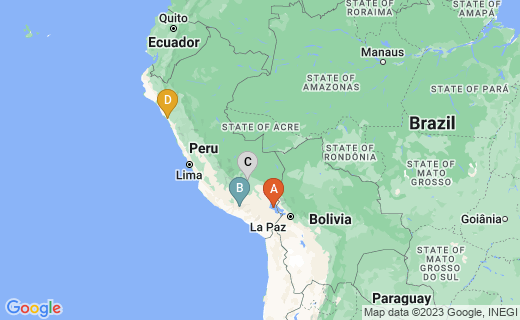 Inca settlements may have been located north of this place around the year AD 1100, but no earlier peoples have been found.

The Moche is an archaeological culture that existed on the north coast of Peru, dating to the Early Intermediate period from about AD 100 to AD 500 (per Quilter, 1990).

"Moche" is also a distinct art style found within the bounds of the same archaeological era. Archaeological digs have discovered among the Inca on the coast of Peru the Moche civilization and their arts, specifically pottery.

The Incan sex pot proliferated the digs and depicted sex in a number of positions, but not the missionary position. A few other pots were found that portrayed single animals and birds.

Another discovery is the number and variety of ritual sacrifices performed regularly. The Incas as a culture are intriguing and to some, frightening.

Inca communities of the past appointed a trusted counter, a man who kept tract of statistics by counting on a series of knotted strings. Several of these string devices have been found by archeologists in the lands once occupied by ancient Incas.