Native Americans During The Civil War

Many people do not realize that Native Americans made significant contributions in the American Civil War. Native Americans served as scouts for both the Confederates and the Union during the war. When the Southern States secedes from the Union in 1861, The Indian Territory (present day Oklahoma) was caught up in the pressure between the North and the South. The five major Indian tribes in the territory wanted to stay neutral, but some tribes eventually sided with the Confederate States while others sided with the Union.

Between 1861 and 1865, as many as 20,000 Native Americans left home to participate in battles on both sides hoping that their services in the armies will bring better treatment to their people.

American Indians In The Civil War 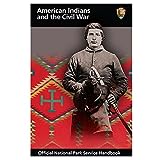 The Scouts and Guides

Many Native Americans served as scouts and guides for the armies. One notable scout and guide was Black Beaver who was a Delaware Indian who volunteered his services to the Union Army. He served as a guide and interpreter during the war. He could speak English, French, Spanish, and about eight different Indian languages and use Indian sign language. He served as a guide at the age of 50 under Union commander Colonel William H. Emory in Indian Territory. While on a scouting expedition he observed some Confederate soldiers were near Forts Washita and Arbuckle where Colonel Emory's forces were stationed. To reduce the risk of an ambush by Confederate forces, Black Beaver helped lead Colonel Emory's men from Forts Washita and Arbuckle on the Texas border to Fort Cobb, a location much further northwest of their original location.

Falleaf, another Delaware Indian was 53 when he actively recruited Indians to start Company D of the 2nd Kansas Indian Home Guard. The regiment was consisted of Delaware, Kickapoo, Osage, Shawnee, Seneca, Cherokee, Seminole, Creek, Choctaw and Chickasaw. At it height, the company had 86 mounted Indians and none of them will ever be reported killed or wounded in action during the Civil War. The regiment lost 11 men to disease and nine deserted as recorded in the regimental books. This regiment fought many battles in the Indian Territory.

After the war, the government still treated the Indians unfairly. Falleaf made an attempt to collect pay the government owed him and his men for their services during the war, but was unsuccessful. The Department of Interior as before the war was still determined to remove the Delaware Indians from Kansas. The Indians were eventually moved to the Cherokee Nation after tribal leaders agreed to sell the land after the signing of two treaties in 1866 and 1867. Unfortunately, the Kansas and Washington politicians, and railroad officials made a large profit from it.

Falleaf was totally against his tribe's move to the Cherokee Nation. He protested for nearly six months with 500 other Delawares and finally gave in after starvation began to set in. Finally, he agreed to move with his wife and family to Indian Territory. Falleaf died in 1880, shortly after becoming a Baptist minister.

Indians played their most prominent roles as soldiers in the Eastern Theater of the American Civil War, especially during the Petersburg Campaign. The campaign lasted from July 1864 to March 1865. American Indians such as the Iroquois from New York, Pequots from New England, Catawbas from South Carolina and Indians from Company K of the 1st Michigan Sharpshooters played a crucial role in the famous "Battle of the Crater" that took place in Petersburg, Virginia on July 30, 1864, with six Union assaults on the city. Most of the Indians fought with the Army of the Potomac and in some cases fought alongside Black soldiers in the United States Colored Troops.

The 1st Michigan Sharpshooters was the most famous fighting Indian regiment in the Union force. This regiment was composed mostly of Ottowas from the lower Michigan peninsula. Company K made contributions in the Battles of the Wilderness and Spotsylvania Courthouse in May 1864, and in the first Union assault on Petersburg, on June 17 ,1864.

About a month later Lieutenant Colonel Henry Pleseants can up with a bold idea of building a tunnel under the Confederate line to decimate them. Men of the 48th Pennsylvania Infantry constructed a 500 foot tunnel and at the other end loaded it up with four tons of gunpowder. The plan was to set off the explosion at a predetermined time.

The decision was made to set off the explosion at 3:30 A.M, but initial attempt to light the fuse failed. Eventually three men went into the tunnel and lit the fuse and the mine finally exploded at 4:44 A.M leaving a crater 170 feet long, 60 feet wide and 30 feet deep.

The explosion killed 287 Virginians, South Carolinians and Catawbas Indians and destroyed two guns in an artillery battery. Immediately after the explosion, the Union forces opened fire on the Crater with everything they had, but due to the confusion that followed, many of the Union soldiers and Ottowas Indians ended up at the bottom of crater unable to get out. The men became sitting ducks and were literally massacred by the Confederates. Two hours later, the men of United States Colored Troop (U.S.C.T.) were ordered into the massive crater and they were also massacred by the Confederates.

By the time the battle ended, there were 3,800 Union casualties and less than 1,500 Confederate casualties. About 40 percent of Union casualties were from the Colored regiment. Austin George, a Pequot Indian from Connecticut, took a bullet in his shoulder and had to wait 18 days before he got it removed because so many white soldiers needed medical attention. After leaving the hospital, George deserted the army in January 1865 because he was dissatisfied with the way he was treated.

By the end of the war, most other Indians felt the same way. They had fought in the Civil War poor, frustrated, and desperate to save their land and their people, hoping for the best.

Indian Generals in The Civil War

Waite rosed through the ranks by impressing the Confederate commanders with his strong determination to stand up in battles. He showed this determination in the Battle of Wilson's Creek in Missouri on August 10, 1861. By October he was promoted to Colonel and put in command of a Cherokee Mounted Rifles regiment. His regiment fought in guerrilla warefare in many small battles, and fought in the Battle of Pea Ridge in Arkansas in March 1862 and on May 10, 1864, he was promoted to Brigadier General. His troops were all Indians and they were Cheorkees, Creeks, Seminoles, and Osages.

Waite was the last Confederate General to surrender in the war. He held out until June 23, 1865 in a town called Doaksville, near Fort Towson in Indian Territory. After the war, he returned to his farm along Honey Creek in present day Delaware County, Oklahoma, where he died on September 9, 1871.

Parker also rosed through the ranks just as Waite did during the war. He served as Chief Engineer during Siege of Vicksburg and later became Grant's adjutant during the Chattanooga Campaign. He was eventually appointed military secretary for the U.S. Army with the rank of lieutenant colonel. His biggest achievement was the drafting of the surrender documents for Lee's surrender at Appomattox Court House in April 1865. Parker is one of the generals in the famous painting of Robert E. Lee's surrender at Appomattox Courthouse. Parker was brevetted brigadier general of volunteers on April 9, 1865, a few days before the Civil War ended.

Unfortunately, life for the Native Americans after the civil war did not improve much. The centuries-old war against the American Indians picked up right where it had left off.