The Navajo people have lived in Canyon de Chelly for several centuries. The canyon is in Chinle, Arizona, Apache County in the Southwest United States. It was designated a National Park Service unit in April of 1931. However, it is the Navajo who own and govern the canyon.

The Navajo call themselves Dine' (The People). Essential to their society is the clan system. Rules of behavior involve a refined culture they call "To Walk in Beauty".

Archaeological study has shown that ancestors of the Navajo and Apache migrated from eastern Alaska and northwestern Canada to the Southwest United States sometime around 1400 CE - subsequently the Navajo settled in Canyon de Chelly.

They were hunters-gatherers. A relationship with Pueblo people helped the Navajo adapt to their new land. Trading practices were established and the Navajo picked up farming techniques. Their main crops were corn, squash, and beans - which are common crops for most Native American cultures. These three crops are called 'The Three Sisters', for they support each other. The corn gives stalks for the bean vines to climb and the squash provide large leaves to shade roots and help keep moisture in the soil.

When the Spanish arrived in the 15th century, the Navajo began raising sheep and goats as their main source of food and trade. This is when spinning and weaving became an important practice for making clothes and blankets.

Eventually their remarkably beautiful weaving techniques for blankets and rugs became a highly prized tourist attraction and source for collectors. An antique Navajo rug or blanket today can be worth thousands of dollars. These rugs and blankets are greatly admired worldwide.

The dwellings for the Navajo are called hogans. A traditional hogan was shaped by packing mud around a wood structure. Some hogans had posts inside for support.

The entrance faced east to bid the rising sun welcome which the people believed brought good fortune to the home and family. Hogans are still made in the same manner as in the ancient days . The hogan is a very energy efficient dwelling. Water will be sprinkled inside on the dirt floor and proper ventilation for natural air currents keeps the hogan cool in the summers. A pit fire in the center of the floor in winter months keeps the home warm.

The hogan is unique to the Navajo and for those who practice their traditional religion it is a sacred home. Some of the people live in more modern homes now, yet to keep in balance with their way of living they have the familiar hogan for ceremonies.

When the Navajo emerged from underground worlds Coyote was with them. Coyote felt a hogan should be built for First Man, First Woman, and Talking God.

Only Coyote knew what a hogan was, for he had done some traveling and checking things out with the Beaver People. So, Coyote gathered logs from Cottonwood trees to build a fork-stick frame, with the entrance facing east. He made a lot of mud to pack tightly all around the structure.

Coyote must have been curious about the shape of the hogan, so Beaver had told him to sit on the ground facing east and hold both knees up to hold in his hands. This showed Coyote and the people that the hogan was like a human sitting in that position welcoming the sun. As the hogan was being built the people sang a blessing song to make the dwelling holy.

At the junction of Canyon de Chelly and Monument Canyon stands two incredible sandstone towers. The Navajo refer to the taller one as the home of Spider Grandmother, it is 750 feet high. It is a popular feature for photographers and a distinctive feature of the park.

Spider Grandmother appears in the creation stories of several Native American cultures. When Creator needed a place for people to live after the great flood he asked Spider Grandmother to weave a home for them. She wove the world then tossed the dew from her web into the sky which created the stars.

Spider Rock can be best viewed from South Rim Drive.

Puebloan Ancestors in the Canyon

Archaeologists believe the Puebloan ancestors, often referred to as The Ancient Ones or Anasazi, inhabited Canyon de Chelly and several other canyons in the area from about the 15th century BC to the 12th and 13th centuries AD.

The Puebloan ancestors were highly knowledgeable about planets and stars as evidenced at Chaco Canyon where the entire community was originally constructed along astronomical alignments which most likely served for important ceremonial purposes to the culture and for signs of seasonal change.

The Anasazi are best known for their extraordinary cliff dwellings in canyons designated national monuments, including Canyon de Chelly. Ancient ruins of The White House is a fine example of the cliff dwelling communities.

Headwaters of streams from the ancient Chuska Mountains of the Colorado Plateau carved out the canyons, forming immensely high cliffs, rock spires and beautiful formations. Canyon de Chelly is one of the most visited national monuments in the United States.

Visitors to the park are restricted from the canyon floor unless they are with an authorized Navajo guide or a park ranger. When visitors come in their own cars the canyon can be viewed from above from North Rim Drive or South Rim Drive.

About 40 Navajo families live in the canyon. Some hogans can be seen from the White House Ruins Trail. In the following video you can see the breathtaking beauty of natural earth-tones, wild flowers, and amazing rock formations.

As of August 25, 1970 Canyon de Chelly is on the list of National Historic Places. Somewhere, deep in the canyon is Mummy Cave. 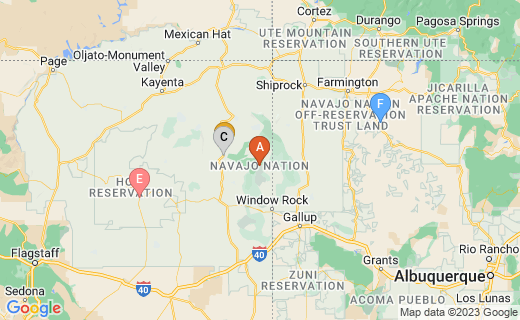