a friend sent me the picture below a few days ago and it sent me digging through some old composition assignments for this paper. I am encluding it here on my Hub site because I think it's important.

Though these two words may mean nothing to you, to those whose ancestors perished by stake, drowning, flame, and other forms of torture during the Crusades, the Inquisitions, the Native American Genocides, and countless other atrocities before and since these times; they are of utmost importance. ‘Never Forget’ is the rallying cry of all the native peoples driven to near extinction through genocide, both culturally and physically.

Man, more specifically the (mostly) Caucasian European nations, in the name of Christianity, has used domination, torture, slavery, and often total genocide of the original peoples to gain and keep control of the wealth and power they consider their right. In this way they have justified some of the most brutal slaughters in human history; from the wars of the late Roman Empire, to the Crusades, to the Inquisition, to world wars, and genocide against the heathen, heretic, Muslim, and Jew. The Holy Roman Catholic Church endorsed and/or orchestrated most of these — with the origins of these atrocities in their faulty or slanted interpretations of the teaching of Jesus.

To do nothing more than tally a list of all these atrocities would require a volume the size of War and Peace. On the North American continent alone, a mere infant of five hundred and twenty years since its ‘discovery’, ‘The American Holocaust’, known as the 500 year war, an estimated 95,000,000 to 114,000,000+ native peoples have perished as result of Christendom and its greed.

From the moment Christopher Columbus (a former slave trader and would-be Holy Crusader) set foot on the beaches of San Salvador in 1492 their fate was sealed. The native peoples were slaughtered and massacred like animals; indeed they were considered soulless animals beyond domesticating.

"One day, in front of Las Casas, the Spanish dismembered, beheaded, or raped 3000 people. Such inhumanities and barbarisms were committed in my sight, the Spanish cut off the legs of children who ran from them. They poured people full of boiling soap. They made bets as to who, with one sweep of his sword, could cut a person in half. They loosed dogs that devoured an Indian like a hog, in less than a moment. They used nursing infants for dog food.”

"Columbus took the title 'Admiral of the Ocean Sea' and proceeded to unleash a reign of terror unlike anything seen before or since. When he was finished, eight million Arawaks -- virtually the entire native population of Hispaniola -- had been exterminated by torture,

The Spaniards eventually went on to conquer Mexico and the southern part of the North American continent using the same process of genocide. By the time the 16th century came to a close, some 200,000 Spaniards had moved to the Americas and probably more than 60,000,000 natives were dead.

With the establishment of the Jamestown Colony (Virginia) in 1607 by the English and the French Quebec Colony in 1608 followed on their heels by New Amsterdam, now Holland (New York) in1624 and New Sweden (New Jersey) in 1638 the fate of the aboriginals was sealed.

Interested only in the land the natives lived on and having little Need for slaves the colonists initiated mass killings. They raided villages killing every man, woman, and child leaving the carcasses to rot or be eaten by carrion. They destroyed villages, burned crops, poisoned animals, and defaced sacred sites.

David E. Stannard referring to a letter written in 1723 stated:

"Hundreds of Indians were killed in skirmish after skirmish. Other hundreds were killed in successful plots of mass poisoning. They were hunted down by dogs. Their canoes and fishing weirs were smashed, their villages and agricultural fields burned to the ground. Indian peace offers were accepted by the English only until their prisoners were returned; then, having lulled the natives into false security, the colonists returned to the attack. It was the colonists' expressed desire that the Indians be exterminated, in a single raid the settlers destroyed corn

sufficient to feed four thousand people for a year. Starvation and the massacre of non- combatants is becoming the preferred British approach to dealing with the natives."

Determining that conventional extermination of the native people was not fast enough Christian Missionaries were encouraged to provide blankets and other gifts that had been previously used by colonial smallpox victims as peace offerings thereby reducing their population by half before the culling even began. John Winthrop, first Governor of the Massachusetts Bay Colony wrote in 1634, “as for the natives, they are near all dead of the smallpox, so as the Lord hath cleared our title to what we possess. In 1703 Massachusetts offered a bounty of 12 pounds on each Indian scalp which increased to 100 pounds by 1723. This practice was so lucrative that frontier posts actually solicited them like they did animal pelts. The scalp buyers made no distinction between male or female, child or adult, infant or ancient; often paying more for the younger ones as they brought more money in England as souvenirs.

In 1776 Independence was declared. Hostilities against the Indian decreased while the colonists immersed themselves in the obtaining their freedom. By the early 1800s though it was business as usual and the American people turned their attentions back to enforcing their ‘Christian’ duty of eradicating the heathen from the Promised Land.

George Washington, the first President of the ‘Land of the Free’, compared the native to wolves referring to them as “beasts of prey” in a speech to the Governors and calling for their complete eradication.’

The Louisiana Purchase in 1803 by Thomas Jefferson opened the land beyond the Mississippi to expansion westward for the already crowded new country. This renewed the blood lust for native lives and lands. Jefferson believed “a republic depended on an independent, virtuous citizenry for its survival, and that independence and virtue went hand in hand with land ownership, especially the ownership of small farms.” (“Those who labor in the earth,” he wrote, “are the chosen people of God.”)

This land rush was called by many names, some of the most popular being ‘The Wild West’ and ‘The Frontier Age’. Popularized in novels and magazines as the time of the ‘cowboys and Indians’; when the brave settlers and vastly outnumbered Calvary fought and eventually defeating the Indian, making our land safe for the American People.

The Indian; having learned well the lessons the white man taught, were indeed becoming savage by this time, with wide scale killings, burnings, and even the taking of scalps. The battles were either referred to as Divine Providence or Massacres by ‘The Savage Red Devils’ depending on the outcome of each battle.

The Battle of Horseshoe Bend in 1814 where Andrew Jackson oversaw not only the stripping away of the flesh of 800+ dead Indians for manufacture into bridle reins, but also that

souvenirs from the corpses were distributed to the ladies of Tennessee was a victory, while The Battle of Little Bighorn, in June 1876, also known as Custer’s Last Stand, was a massacre.

The discovery of gold in California in 1849 and shortly thereafter in Alaska, followed by the Homestead Act of 1862 opened up the flood gates sealing the fate of the native.

The eventual defeat and forced removal from their homelands into small concentration camps (find a better name for them) caused increased death, by military, disease, starvation, extremely harsh conditions.

The late 19th Century witnessed a different type of genocide perpetrated on the Indian. Cultural genocide was utilized in a concentrated effort to Americanize the few natives who survived the ethnic cleansings; resulting in destruction of the native way of life. Indigenous youths were incarcerated, indoctrinated with non-indigenous Christian values, and forced into manual labor. Often they didn’t see their families until later in their adulthood after their value systems and knowledge had been supplanted with Christian thinking. One of the foundations of

The U.S. strategy was to replace traditional leadership with indoctrinated converts in order to expedite compliance with their goals.

The government’s and religious organizations’ systematical destruction of Native American culture and religious heritage continued through the 20th Century and on into the 21st in catastrophic and unexpected ways. John Toland is quoted as saying:

“Hitler’s concept of the concentration camps as well as the practicality of genocide owed much, so he claimed, to his studies of English and United States history. He often praised to his inner circle the efficiency of America’s extermination-by starvation and uneven combat-of the ‘Red Savages’ who could not be tamed by captivity.” ( “Adolf Hitler”, Vol. II, p. 802, Doubleday and Co. N.Y. 1976 )” The World finally took notice in 1948 when primarily white victims of Nazi Germany faced cultural extinction. The “Holocaust” of World War II came to be the model of genocide still being used today.

After WWII the United States quickly emerged as the world's "superpower" primarily through its economic might. For some time, many believed the U.S. to be a shining example of economic freedom for other nations to emulate. Indeed, America was eager to promote "economic freedom" globally to open new markets for U.S.-based corporations

In the 21st Century which many believe to be ‘The last generation’; we as the human race, must realize that other genocides have occurred. Genocide against many particular groups is still going on today – and America is still at the top of the list of tyrants. Whether in Vietnam or Iraq, Nicaragua or Indonesia, the inconvenient truth is that “human rights” are

reserved for white male Americans and Israeli Jews. The US native population, women, blacks, the Vietnamese, the Palestinians, the Iraqis, and all other minorities are inferior and entitled to no particular consideration.

“We deny the nopal no longer. We know full well we’re not on foreign soil, but on Indian lands. (Were we supposed to forget that too?) So there’s no going back. If anything, we are back. The whole continent, the whole earth---which our ancestors have traversed for thousands of years---is our mother. Meanwhile we watch Congress and the president do a dance about not pardoning or not granting amnesty to those who’ve been remanded to live in shadows. Sinverquenzas! Just who precisely needs to be pardoned? Those who are exploited and who have been here forever …. Or those who have been complicit in our dehumanization?”

Though this history has long since been forgotten or ignored, the earliest followers of Jesus rejected violence, tried to return good for evil, fed the hungry, did acts of mercy and unconditional love and tried to make friends out of their enemies (by caring for them, feeding them, praying for them and certainly refusing to kill them or pay for somebody else to kill them). Wakeup all you who claim allegiance to Jehovah and salvation through Christ His Son and heed this message:

“Jesus would surely have condemned his church’s complicity in the ethnic cleansing of Native Americans, the enslavement of black Africans, and the segregationist, apartheid policies that were designed by various ruling elites to destroy ethnic or religious minorities.”

find anything on amazon 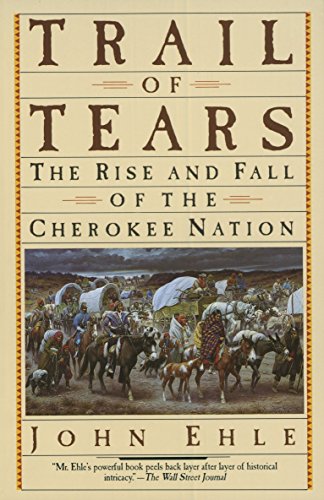 Trail of Tears: The Rise and Fall of the Cherokee Nation
Buy Now

read more of my Hubs