How to Build a Newtonian Demonstrator

Newton's Cradle demonstrates Isaac Newton's Third Law of Motion, which states that for every action, there is an equal and opposite reaction.

Why is This Toy Important?

A Newtonian Demonstrator is a fancy name for a device that is also called the Newton's Cradle and is sold by the second name as an office desk toy.

You may have seen it at home, in an office, or in a movie and wondered what it was.

The concept was demonstrated centuries ago in France and Sir Isaac Newton later developed laws of physics that are illustrated by the device.

The Newtonian Demonstrator Fits in With STEM Education

The Newton's Cradle has sold very well as an executive desktop toy since it was first manufactured in the late 1960s. It was reportedly prototyped by the actor Simon Prebble. At first, a wooden cradle version of the device was sold by the famous department store, Harrods of London.

Soon after this, manufacturers fashioned a metal cradle of chrome based on the work of a sculptor. This sculptor is the film and TV director, Richard Loncraine. Thus, actors and other film people contributed the largest part of the idea propelling this scientific device and toy item into the marketplace.

The largest Newton's Cradle so far was designed by Chris Boden.

The huge construct is located at The Geek Group home base in Grand Rapids, Michigan.

This nonprofit company is a cross between a Center of Science and Industry and Mad Science. The huge Newtonian contraption is made with bowling balls and is on public display from Monday through Saturday from 10am - 8pm. It is often used for demonstrations in science, various technology presentations, and for educational groups.

The monster Newtonian demonstrator is made up of 7 bowling balls of equal weight, 15 pounds (6.8 kilograms) each. The bowling balls are attached securely to metal cables and hung from metal trusses in the ceiling of a warehouse at The Geek Group. The suspension cables are 20 feet long (6.1m) and the bowling balls hang 3 feet from the floor (1m).

Construction of the Large Version

Hanging from metal beams in a sturdy warehouse ceiling, this Newton's Cradle does not need a frame.

The parts needed for this large project include 7 bowling balls of equal weight, a substantial amount of metal cabling, hardware to attached the cables to the bowling balls and the ceiling, and the proper metal working tools for the job. For every action, there is an equal and opposite reaction.

The Geek Group is an expanding and fascinating place to visit, because there is always something added to enjoy and learn. It is ideal for after-school classes, summer sessions, science demonstrations, presentations for private groups, project work space, and workshops on any of the following topics and new subjects added regularly:

These individuals teach science, technology, engineering, math, and arts education. That's the hard sciences of STEM, plus art! They really understand that science and art go together.

If you are ever near Grand Rapids, Michigan, stop in:

The Geek Group in Michigan 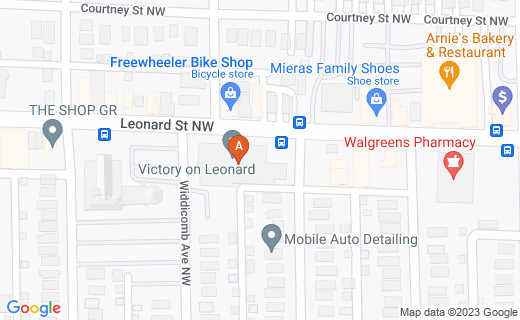 Additional Topics in Physics and Mathematics