Nell is fascinated by all things supernatural and one of her favorite subjects is Angels as she firmly believes she has met one.

Go anywhere in France today and you will find that many people will know the name Nicholas Flamel.

His name has been immortalized in books and films. He even gets a mention in Harry Potter.

For many people around the world he is just a myth or legend.

But the truth is stranger than fiction. Nicholas Flamel is one of the most mysterious and legendary Alchemists in the World. Like many other Alchemists he started out being relatively unknown.

And in fact for nearly two hundred years after his death the life of Nicholas Flamel was purely speculative until texts and old parchments appeared.

Then his amazing life started to attract the interest of the local population, which in turn began to appeal to others farther afield.

The Philosopher's Stone: Alchemy and the Secret Research for Exotic Matter
Buy Now

So who Was Nicholas Flamel?

Nicholas Flamel was born in 1330 and lived and worked in Paris.

He was well known as a scrivener, which is another word for a scribe or writer. He also sold manuscripts too.

This was a lucrative business back then as the printing press as we know it was not invented in Europe until approx 1436 by Gutenberg in Germany.

So someone like Nicholas Flamel would have made a good living at reading, writing, and selling manuscripts and religious papers to the local population.

But after his death in 1418, rumors were started saying that he was in fact an Alchemist who had been experimenting with the science of turning base metal into gold.

But there were also whispers of Nicholas finding and using the 'The Elixir of life' and the Holy Grail. In other words, The Philosophers Stone.

Not only turning base metal into Gold, but producing a serum which would cure all ills and make him Immortal.

In other words people believed that his death had been a ruse, and he was in fact still living somewhere else in secret, because he had become Immortal.

His life was actually one of the best documented of all the Alchemists. He ran two shops with his wife Perenelle and this is where he did his writing and selling of his work.

They were pretty rich by the standards of the day, which is probably why the rumors started in the first place.

Perenelle had already married, then buried two husbands, and their joint wealth was given over to her.

Therefore this extra money helped Nicholas with his experiments and also gave them the money to fund several properties too.

Nicholas lived well into his eighties and in fact designed his own tombstone, which can still be seen at the Musee du Cluny in Paris.

Later his Will showed that he had a generous amount of money but not so much that could be said of someone who had changed metal into gold!

Of course the people who believed that he was in fact immortal think the burial stone is fake, and Nicolas moved somewhere else to conceal his identity.

The House of Nicolas Flamel.

The House Of Nicolas Flamel

One of his houses is still there. Sitting in a small side road in Paris. Most people don't even notice the name above the door, but the locals still talk about him today.

51 Rue de Montmorency is the oldest stone house in the whole city. The inscription on the wall quotes:

We ploughmen and women living

at the porch of this house which was built in 1407, are requested to say every day,

Our Father and an Ave Maria,

These days the downstairs of the house is a restaurant.

There is a road named after him in Paris, you can find it near the Louvre Museum, aptly named the Rue Nicolas Flamel.

So What Made Him So Famous?

Like the legend of Robin Hood and King Arthur, the story of Nicolas was in fact added too and exaggerated much later in the 17th Century.

The works, published in 1612 and called Livre des figures hiéroglyphiques.are said to be the lost writing of Nicolas Flamel, and talk about how he achieved the impossible.

But its also where it gets slightly strange, because nobody really knows who wrote them or where they came from.

The actual books show designs of something called a tympanum, which in modern language means a lintel above a door, or in this case a lintel with sculptures and images carved into the surface.

The work was commissioned by an unknown source that had disappeared many years before, hence the reason why they believe it was Nicolas's work.

But the most controversial of all, has to be the works that appeared, concerning Nicolas and the secret Alchemy taught to him by a Jewish convert to Christianity, while on the road.

In the introduction to Livre des figures hiéroglyphiques Flamels search and study to find the Philosophers is described in detail.

But then the mystery develops even more.

According to the introduction, Flamel has dedicated his life's work to a mystical 21 page book that he had purchased.Evidently in 1378 Nicolas traveled to Spain to get help with some translation.

When he was returning to Paris he met a Sage or teacher who told him that the book was part of an ancient text or more likely a copy of the original Book of Abramelin The Mage.

It was this book, the knowledge stored in its pages that gave Nicolas all he needed to learn how to make the Philosophers stone. Or Gold. And of course the secrets of immortality. 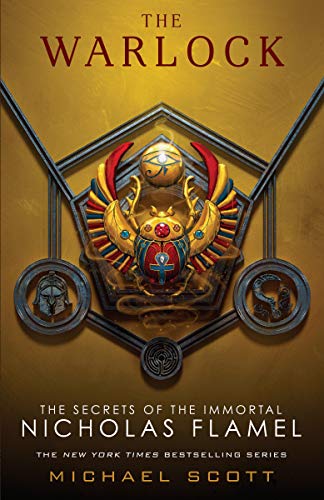 The Warlock (The Secrets of the Immortal Nicholas Flamel)
Buy Now

In 1761 over a hundred years later and after many whispers and talk of the mysteries of Nicolas Flamel, a man named Etienne Villain claimed the whole thing was a fake and made up by someone called P. Arnauld de la Chevalerie, Who was said to have written under the name of Eiranaeus Orandus.

But of course by this time the legend had taken hold, and many people scoffed at the allegations of Etienne Villain claiming that Nicolas Flamel had indeed been made immortal, and more to the point he had been seen many times over the centuries by writers and artists!

In fact there is one story that claims someone opened his grave and it was empty! Therefore starting off the rumors that he was in fact immortal.

Strangely enough even as late as the 19th century people claimed to have seen him walking around various parts of France.

Even the most famous of Alchemists, or should I say Scientist Sir. Isaac Newton, wrote about Nicolas Flamel in his Journals the Caduceus, the Dragons of Flammel!

Like many nouveau scientists, Alchemy was surrounded by mystery and a great deal of fear.

So, the legend of Nicolas Flamel was born. And is still going strong today.

The Dark Secrets Of Sir Isaac Newton And Alchemy

The Alchemists And Science.

Alchemy was a strange and mysterious secret back in the Middle Ages. Men hiding behind closed doors mixing strange concoctions seem the stuff of legends.

But of course they are not. These men, many who we know today as the great Scientists did in fact practice Alchemy. Today we call it Science.

By mixing various chemicals together to try to find the illusive Philosophers Stone these scientists discovered so many other amazing scientific finds.

In fact if we think about it,these men, call them alchemists or scientists, actually found many things we use today.

New alloys, acids and color pigments, even finding out about atoms which then took many centuries for us to prove!

All the chemicals in the Periodic Table were found by these original scientists or Alchemists who were striving for two things. Gold and immortality.

And the most famous of the Alchemists?

The video is a fascinating look into the real Sir Isaac Newton. Well worth watching as it shows his decline into madness, his frantic search for the philosophers stone and his reawakening into real science.

Newton was fascinated by the 'occult'. And was said to be the 'Last of the Magicians' and not the originator of Science.

He was interested in all the sciences, from natural to material. He was also fascinated by the Temple of Solomon. The writings which were the most magical and mysterious of his time.

He studied the dimensions of the the Temple and believed all knowledge was somehow hidden within the Temple.

And this is what he believed produced the chemical compound that would give him the Philosophers Stone.

Newton is only really known as a great Scientist, but his main body of work took him deep into the realm of the occult. Studying Atlantis, Predictions, the end of the world and Secret Societies.

At the time of his death he had become the scientist we know today. And his legend lives on. Time has changed the memory of Sir Isaac Newton from a secretive alchemist who was slightly unstable to a great man who helped change the world of science.