Ferns and Fungi in the Rainforest

The rain forest is like no other place. The gigantic Sitka Spruce and western hemlocks sometimes grow to heights of 300 ft. and 23 ft. in circumference. Just standing near one of these giants is a humbling experience. Walking through one of the trails in the rain forest, you will see a fairyland of mosses, ferns and plants hanging from the trees and growing from the ground. Rotting fallen logs provide nurseries for seedlings to begin new life.

The rain forest is home to many animals including Roosevelt elk, black tailed deer, black bears, cougars, river otters. Insects, reptiles and amphibians abound, though there are no poisonous snakes here. For bird watchers, bring binoculars to see thrush, western robins, gray jays, ravens, and pileated woodpecker.  Walking on the trails of the rain forest, with greenery everywhere, mosses hanging from the branches and growing on the downed trees, one can imagine the many unseen small animals, birds and insects in, under and among the plants.

Temperate rain forests, unlike tropical rainforest which have many "wet" seasons, usually have one long wet season and one fairly long dry season with fog providing the needed moisture. This makes the temperate rain forest of Olympic National Park a pleasant place to visit in the summer months. During our visit in early September, we only experienced a few short rain showers.

Rain forests are so named because of the very large amounts of precipitation that occur in their ecosystems. The park's rainforests get an incredible 140 to 167 inches of rain each year. That's 12 to 14 feet!

More Photos Taken in the Rainforest

Unless you see them in person and stand next to one of these mammoth trees, it's hard to imagine trees this huge.  If you go to Olympic National Park, do get a list of the biggest trees and take the short walks into the forest.  There are few places in the U.S. where you can experience old growth forests of such majesty.  Standing next to the western red cedar that is 159 feet tall with a circumference of 63 feet is truly a humbling experience.

Where to find the biggest trees:

Douglas fir is 37 feet in circumference and 298 feet tall. It is located on the South Fork Hoh River Trail, 0.25 mile inside Park boundary, 40 ft south of trail.

The Sitka Spruce Near Lake Quinault in Olympic National Forest is 191 feet high and over 58 feet in circumference!

Western Redcedar 761 feet in circumference, 159 feet tall is located on the North Shore of Lake Quinault, across from Rain Forest Motel.

For a complete list of other huge trees to be found in the park, consult rangers at a Park visitor center. 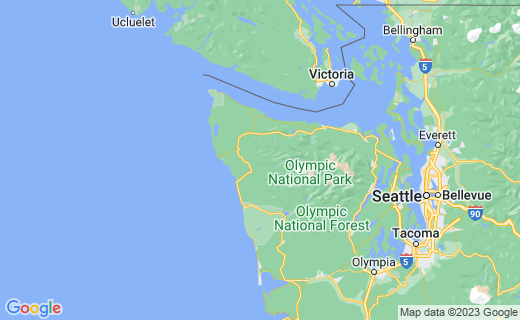 Exporing the Rain Forest with a Camera

The Olympic National Park Rain Forest offers many opportunities for wonderful photographs. Interesting plants, mosses and flowers are perfect subjects for close-up digital pictures, and you will see details in your photographs that you may not have noticed in the live subject.  Be sure to make notes when you download your pictures so that you will remember where you took them.  In order to find my photographs again, I file each batch of pictures in a folder named with year, month and place.  When I have time, I go back into my computer and name each photograph.  That way, I can find a specific photo even years later.  And don't forget to back up those very important pictures!

On one of our explorations of the rain forests, we wandered several miles down a dirt road, stopping to photograph plants and flowers along the way. The patchy fog along the way increased the feeling of solitude in the deserted area, and when we stopped, there was only the sound of a few birds calling.

The bright pink of the foxglove stood out sharply among the green ferns and plants along the roadside, and I was thrilled to photograph it close-up. At the time I did not know that there were no poisonous snakes in the rain forest, so I was very wary of leaving the edge of the road.

Camping in the Rain Forest

There are a few campgrounds in the rain forest that will accommodate RVs, though it is wise to call ahead to make sure that the winter storms have not blocked access roads or campgrounds. As in other National Park campgrounds, the camping is primitive with no utilities or water hookups.

Some great books about the Olympic Peninsula

If you like to write, think about writing for HubPages. It's free to join and you can make money, too! Click here to Join HubPages.

Links to other sites of interest