Drumbeat, at least in theory, had been planned as far back as 1897. Germany had always been fascinated with attacking America, a land insulated and buffered by two oceans. There was a desire to “break” this immunity. Thus, in 1897, when Hitler was a mere boy of eight years, the German military planners first proposed a mostly naval operation against the East Coast of the U.S. Planning continued and by 1898, a more detailed vision had been constructed that focused on a naval bombardment and landing troops on Long Island along the Chesapeke Bay.

Captain Adolf Golzen, a German military attaché in Washington D.C., had seen such plans and was so taken by the discussions or writings in 1899, wrote his own detailed and serious plan. In his plan, which he presented, made New York city the primary target for a large naval blockade. One naval task force would blockade the harbors at the east end of Long Island as another large task force would enter New York Bay. The German armada entering would bombard FortHamilton and FortTompkins. Other ships would bombard Manhatten. Once completed, several infantry battalions and one engineer battalion would invade Long Island to establish a bridgehead to America. These units would subsequently attack across into the Manhatten area.

Beginning in 1917, the concept of attacking America with aircraft and airships seemed to take over the concept of using ships. The concept would require the use large bi-planes to reach the eastern U.S. seaboard. The idea went into remission in 1919 when Germany lost WW1. However, the idea remained and simmered on the back burner of high ranking minds until 1929, when a report by Major Wilberg, an Army Weapons Officer, mapped out a secret requirements document for bomb carriers. This remained secret until 1933. It then resurfaced with the rise of Hitler and taken quite seriously. The requirement was to have a four engine aircraft, with a crew of eight, armed with two 20mm cannon and five MGs. Its operational height was 6000 m and a top speed of 300 km per hour. Its range would be 2000 km. Other long range aircraft were also in various planning stages, but as Hitler rose to power, the Reich Air Ministry was more interested in the Bf 109 and Bf 110 fighter. One such long ranger bomber was the Do 19, which first flew in 1936.

In 1936, the Reich Air Ministry requested a long range bomber capable of flying 5000 km with a 500 kg bombload (the east coast of America is 6500 km from Europe). Eventually, Heikel produced the He 177. Competition was keen and Focke-Wulf present its FW 200, and in August, 1938, one flew non-stop from Berlin to New York! Then, in 1937, Hitler met with Willy Messerschmitt where he presented to Hitler’s surprise, the Messerschmitt long range bomber program. He had already worked up specifications for the Me 261, an aircraft that could fly 6700 km and 5000m and one ton bombload.

As 1940 turned in 1941, Hitler became more adamant in his desire to bomb to ashes New York City in order to teach the Jews a lesson on terror. The aircraft designs were valid and plentiful, what lacked were the engines! In April, 1941, the Air Ministry demanded that 50 Me 264s be built and tested, with 10 aircraft to have top priority so the air offensive against America(along with Drumbeat) could begin. Hitler wanted to target heavy industry (20 industrial sites had been identified). Messerschmitt had already six prototypes unbeknownst to Hitler by March 1941, with another 18 to be built. These could fly 12000 km and carry 3-5 tons of bombs. In a conference on May 22, 1941, Hitler was informed that if Germany seized the Azores in the middle of the Atlantic, it would provide a launch pad from with the He 177 and FW 200 could bomb from.

On December 7, 1941, the German High Command received word that the Japanese had attacked at Pearl harbor. For Admiral Karl Donitz, the commander of all U-boats based in France, the time was ripe. Even as a young officer, Donitz had been fascinated about attacking the US. Looking at the map, the distance from France to the waters off the US east coast is 3000 nautical miles. Unlike the Luftwaffe, Donitz had two submarines capable of attacking the US: Type IXB and IXC. When Donietz requested the use of 12 IX Type U-boats for his operation, he received a lukewarm response, in fact, all of the available U-boats were already in use and on station—but for five, which happen to be the advanced IX Type! These were: U-123, U-130, U-66, U-109, and U-125. Two were IXB types, the remaining were IXC types. Their captains were briefed and told to not expose themselves unless the target was at least 10000 tons while in American waters. The fishing ground was from CapeHatteras to St. Lawerence. The U-boats secretly made their way across the Atlantic between Dec. 16-24.

When the US Naval forces were informed of the impending attack by the British, the US Navy based in Virginia did little and remained idle as it was expected that these forces would be used to confront the German Navy. Thus, the entire US East Coast was defended by a polyglot force of the US Coast Guard. This force consisted of:

The US Army Air Force, like the USN, had its own agenda and planning, which prevented helping defend America’s east coast by air reconnasiance. The following were based in from Virgina, New York to Massachusetts:

Because of maintenance and no communications between the three organizations, on average, the USN could only allow two destroyers to hunt for U-boats from Jan. to March every day. The US Army Air Force could only allow six aircraft (usually B25s) to make sorties every day. To defend Florida, in February, only 14 Scout aircraft and 2 B18’s were operational!

Drumbeat arrived unannounced and remained secret. Many Americans did not know German U-boats were waiting off shore.

The pace of Drumbeat grew with the passing of every month as subs rotated out and back to Franceand those just arriving. Doneitz continued to add all available submarines and more began to arrive off of Florida or in the Caribbean to intercept vital oil pumped from Aruba. Replacing the first wave in February were: U-103, 106, 107, 108, all IX Type. Also arriving now were the lesser U-boats, VIIC Type: U-432, 564, 578, 653. These were positioned up and down the East Coast from Norfolk to Boston. Others like the U128 and 504 hunted off the Florida coast Appearing in the warm tropics near Aruba and Trinidad raomed U67, U129, U156, U161, U502- all IXC Type. Each of these subs could linger around for 2-3 weeks time before returning.

U-Boats were deadly. For example, in a period of 3 days, in a sector assigned to three sub hunter ships, 14 ships had been sunk and 90,500 tons went to the bottom of the sea. None of the subs had been found or destroyed. Spotting a surfaced sub from the air by a B18 or B24 bomber was like finding a needle in a haystack. In the six months that Drumbeat was happening, less than five aircraft had spotted a surfaced submarine.

On June 13th, just after midnight, U-boat 202 crept as close as it could to the beach area at Amagansett, Long Island. From the sub were four German men who deployed a collapsible boat and paddled onto America. The first German troops had fulfilled a 45 years dream! These four men were part of Doenitz’ plan to land saboteurs who spoke perfect English. U-boat 202 then silently disappeared. Unbeknownst to the Germans, they happened to pick the only beach that the Coast Guard patrolled 24 hours a day and very close to the Coast Guard Station and the 113th Mobile Infantry Unit! Actually, a week had gone by before the first German saboteur had been captured. It was Georg Johann Dasch, a German national that had been a US resident for many years and married to a US citizen!

On June 17th, U 584, off Ponte Vedra, Florida, the story was retold, as four Germans landed onto an isolated beach unobserved. With them, they carried a considerable amount of explosives which they hid. Two of the saboteurs went to New York, the other two went to Chicago.

It was not until May, 1942, that the convoys departing from the US East Coast were in convoys escorted by US Destroyers. For some reason, the American authorities remained a very stubborn attitude about not mandating that ships travel in convoys as the British transports had done.

In all, around 40 U-boats participated in Drumbeat. The pickings were good and by June, over 400 ships had been sunk and 2,000,000 tons of war material went to the bottom of the ocean along with 5000 men. Drumbeat was very cost effective, only seven U-boats were lost. Had the Germans focused on the refineries at Aruba, which provide 75% of the aviation fuel Canada and the US used, by destroying it, the ramifications would have been detrimental. However, only two subs arrived there and shelled it causing fire but that was about it. 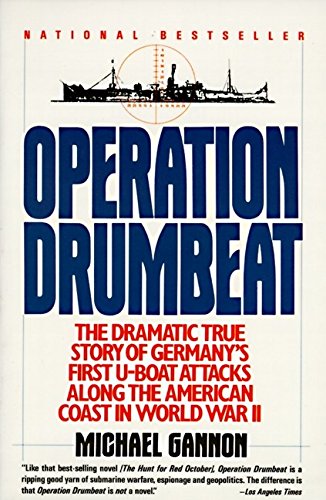