Origins of the Alphabet

The invention of the alphabet is one that has has profound impact on society throughout history, in fact it could be argued that the inventions of the alphabet is an events that changed the world. It was once assumed the first alphabet was created by the Phoenicians and then adopted by the Greeks who assured it’s place in western history. However since the discovery of the proto -sinaitic inscriptions (dated to the 15th century BC) in 1905 by famous archaeologist, W. M Flinders Petrie and subsequent decipherment work by scholars we now know the Phoenician alphabet is a descendant of this earlier script, Proto-Sinaitic, created by the Canaanite workers of the Egyptian turquoise mines of Serabit el-Khadim in Sinai. This hub will offer an overview of the discovery and development of the alphabet and explore the people behind it.

The development of the first Alphabet, Proto-Sinaitic

The proto-sinaitic script (sometimes referred to as the proto-canaanite script) developed around 1900-1800 BC in one or more areas near Egypt, however there are contradictory theories as to how the proto-sinatic script developed though it is widely accepted that this is the first known alphabet in the world.
Some scholars suggest that Canaanite scribes trained in Egyptian and cuneiform writing systems adapted the signs to represent their own language and from this the set of alphabetic signs developed. However some dispute the idea that the Canaanite mine workers developed it themselves as they suggest those who developed it needed a high degree of specialised knowledge and suggest instead that it was an intentional creation of Egyptian scribes with a knowledge of Semitic Canaanite to facilitate the administration of projects involving speakers of Semitic Canaanite. It is suggested that the main influences of the proto-sinaitc script were Egyptian hieroglyphs and everyday objects converted into graphemes, adding that as the Canaanites could not read Egyptian they related to the hieroglyphs only on an iconic level, relating to them only as ‘pictures’, without knowing how to read the Egyptian language using them. Alan Millard offers a vivid reconstruction of how the leap to an alphabetic script may have come about in his 1986 article ‘The infancy of The Alphabet’ describing a canaanite scribe trained to write in Egyptian and cuneiform yet noting none of these suit his language begins to develop a set of signs to represent each consonantal value . Despite various scholarly disagreements the hieroglyphic origin of the signs in the Proto-Sinaitic alphabet remains (largely) undisputed.

The Location of Serabit el-Khadim, birthplace of the Alphabet 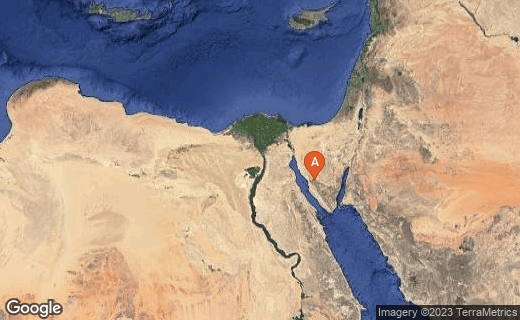 The Archaeological Evidence for the development of the Alphabet

The main bulk of evidence we have are the 35 inscriptions found at Serabit el-Khadim. Four were found in the Hathor temple, with the rest in the mines and three scattered in the surrounding fields. All are on local sandstone and the inscriptions can be roughly divided into two groups: those carved on walls and those which are movable, either on statuettes or stele. It is believed that those on the statues from the temple are votive in nature whilst those in the fields were used for funerary purposes. The alphabetic inscriptions are thought to have been made by Semitic mine workers and opinion is divided as to whether the script originated in Sinai or was imported by workers from nearby Canaan. The inscriptions have been to belonging to the reigns of

Hatshepsut and Thutmosis III of the 18th Egyptian dynasty (c 1550 - 1292 BC). This evidence was gleaned by pottery finds in the vicinity which were easily datable, however there is not concrete agreement over the dates. Other evidence for the proto-siniatic alphabet, in addition to Serabit el-Khadim inscriptions, include similar inscriptions recently found at Wadi El-Hol in the Egyptian delta by John and Deborah Darnell. Other evidence found across Canaan (now modern day Israel) includes a potsherd from Gezer in with three signs, one from Tell Nagila with five signs, a stone plaque from Shechem with eight signs and a bronze dagger from Lachish with four signs.

The Site of Serabit El-Khadim today

Who were the workers of Serabit el-Khadim?

Serabit el-Khadim was an Egyptian turquoise mine in Sinai. The mines were worked by the Egyptians who mounted large scale expeditions, the Egyptians also employed local Retennu and Aamu peoples from Syria, in some ways Serabit el-Khadim was an ideal place for the creation of a new alphabet as the site was a melting pot of different cultures and somewhat excluded from the outside world, the site is isolated in the desert and the workers would camp near the mines. The work in the mines consisted of many different jobs such as architects, builders, miners, high officials and translators but the only job fit for a ‘peasant’ was care of the donkeys used for transportation. From this we can deduce that the workers at Serabit el-Khadim who created the alphabet were skilled craftsmen and were not likely to be nomadic pastarolists or ‘peasants’. The workers were religious and somewhat Egyptianised in their beliefs , for example Hathor and Ptah were worshipped, but perhaps as substitutions of similar Mesopotamian gods and goddesses. However there is evidence for distinctly Canaanite ritual practises such as burnt offerings and hill temples, which are not found in Egypt . One specifically Canaanite feature is the use of cones of sandstone, two of which were found at Serabit el-Khadim in the sacred cave. The cone was a central focus of worship in Syrian temples and acted as an impersonation of the deity. The merging of Egyptian and Canaanite gods was common, Ptah, the Egyptian god of Craftsmen, was identified with Koshar, the Canaanite god of craftsmen, metallurgy and music. The ‘Lady of Turquoise’ was worshipped at Serabit el-Khadim, both by the Canaanite and Egyptians, her goodwill and blessing were essential to the success of the mining expeditions, many offerings were made to her and workers prayed to her for help at her shrine. It is possible that it was through religion that the canaanites became aware of the power of writing, they saw the Egyptians dedicated their names to the goddess and their names stood by her for eternity. Perhaps it was this sense of permanence and dedication that inspired the inscriptions to the goddess Balaat in the proto-sinaitic inscriptions?

What was the Alphabet Used For?

The use of the alphabet, as opposed to more complicated systems with thousands of symbols such as

Egyptian Hieroglyphicsand Cuneiform, did open up literacy to a much wider percentage of people, however this leap did not seemingly take place until many years after the creation of the Proto-Sinaitic script. Tough the alphabet may have been in use by many people informally while official business was carried out in Egyptian or cuneiform. After all many official documents in Mesopotamia were written in Sumerian a language that had died out as a spoken language by the second millennium, yet continued its use as an official written language, much like Latin was used in Europe in the middle ages. As far as we can decipher the Proto-Sinaitic texts we have were used to convey names and relationships to Canaanite gods of their environment such as Baalat and El.

Egypt and Mesopotamia, while they have rich histories of writing and developed complex and effective ways of recording language, were not fully literate societies. Only about 1-3% of Egyptians were literate and the business of writing was undertaken by highly trained scribes in both cultures. With this background in mind the fact that non elite peoples, such as the workers at Serabit el-Khadim, began to write even simple inscriptions demonstrates a break from tradition and a move towards a more equal and democratised access to literacy with people learning the script from each other without the aid of schools and extensive scribal training, people used the script to write their names and make dedications to gods: No large scale writing or official use was involved. This access of ordinary non elite people to the ability to read and write even the simplest of words and sentences is a development that would have far reaching consequences for human history. The alphabet opened up the ability to read and write to millions of people without the need for years of extensive training, while the true force of this may not have been felt until centuries later it is clear that the Canaanites of Serabit el-Khadim sparked something of a revolution!

How to Read Egyptian Hieroglyphs: A Step-by-Step Guide to Teach Yourself, Revised Edition
Buy Now