What is the Periodic Table of Elements?

● Allows scientists (and others) to predict relationships between elements and predict properties of new ones.

● The term “atom” is a general term. Everything is made of atoms.

● Elements are the building blocks of all matter.

● Lists the CHEMICAL SYMBOL, ATOMIC NUMBER, and the ATOMIC MASS of each element.

● 118 elements but only the first 18 make up most of the matter in the known universe.

The first 94 elements occur naturally. The other 24 occur when formed in a laboratory.

Almost 75% of all ELEMENTS are classified as METALS.

ELECTRON CONFIGURATION: The arrangement of electrons in the ORBITALS of an atom, molecule or crystal.

Electrons are arranged in SHELLS at different distances around the nucleus.

Shell 1: holds a maximum of 2 electrons

Shell 2: holds a maximum of 8 electrons

Shell 3: holds a maximum of 18 electrons

Shell 4: holds a maximum of 32 electrons

● Non-Metals: DO NOT conduct heat or electricity.

● Semi-Metals: Have the properties of metals and non-metals.

● Nobel Gases: Do not combine with other elements.

● The hardest natural substance on Earth is DIAMOND. Strangely it is rather brittle and if hit (with a hammer) will usually shatter.

● A non-metal which conducts electricity is GRAPHITE.

● The only metal that is liquid at room temperature is MERCURY.

● The lightest Chemical Element is Hydrogen (H). The heaviest is Hassium (Hs).

● Hydrogen sits in Group 1 but is not an Alkali Metal.

● Cobalt, Iron and Nickel are MAGNETIC. Apart from STEEL (which is a mixture that is mainly IRON) the other metal elements are NOT magnetic.

● Three metals (iron, cobalt and nickel) are MAGNETIC. Steel is a mixture of elements but it is mostly iron, so it is also magnetic. The other metal elements are not magnetic.

● ATOMS with atomic numbers higher than 92 do not exist naturally. They are created by bombarding ELEMENTS with other ELEMENTS.

● ELEMENTS are arranged by their number of PROTONS (atomic number).

● ALKALI METALS can explode if exposed to water.

Understanding The Organisation of the Periodic Table

● Each element is placed in a specific location depending on its ATOMIC STRUCTURE.

● 9 ROWS (PERIODS) read left to right (based on their ATOMIC NUMBER i.e. the number of PROTONS in their NUCLEUS).

● Each row and column has specific characteristics.

● All elements in a PERIOD have the same number of ATOMIC ORBITALS. As you go down the table each row adds an ORBITAL (from one to seven).

● Each vertical column is called a GROUP.

● The elements in each GROUP have the same number of ELECTRONS in the OUTER ORBITAL (also called VALENCE ELECTRONS).

● All elements in GROUP ONE (first column) has one electron in its OUTER SHELL. As you go along the columns add one electron.

● As the ATOMIC NUMBERS increase the elements become rarer in nature and also usefulness.

● The two rows under the main PERIODIC Table are the LANTHANIDE and ACTINIDE series.

● LANTHANIDE (15 elements) can be found naturally on earth.

● ACTINIDE (15 elements) are radioactive and are not all found in nature.

The main ones to memorise;

● REACTIVITY: Metals are very reactive (form compounds with other elements).

● ALL Actinides are RADIOACTIVE.

● Some are synthetically produced while others are found in nature.

● Uranium and Thorium are naturally occurring.

● Alkali EARTH Metals are in group 2.

● They are reactive but NOT as reactive as Alkali Metals.

● Alkali Metals are in group 1.

● They are VERY REACTIVE and DO NOT occur freely in nature.

● They have only ONE electron in their outer shell.

● Good conductors of heat and electricity.

● They are commonly found and are not considered valuable (inexpensive).

● They oxidise and corrode very easily.

● Halogens is from the Greek word which means “SALT-MAKERS”.

● Some of these elements are used in glass production, lasers, or superconductors.

● Using ion-exchange, separation of an individual element is easier and more precise.

● Placed along step-line between metals and non-metals.

● Have the same properties as both metals and non-metals.

● Some are semi-conductors (used in computers).

● Once called INERT GASES (non-reactivity). But discoveries since then revealed there were other gases that were inert but not NOBLE GASES.

● All NOBLE GASES are located in the far right column of the Periodic Table (GROUP ZERO).

● They are the MOST STABLE due to the number of VALENCE ELECTRONS their outer shell can hold.

● They rarely react with other elements since they are already STABLE.

● They all conduct electricity.

● They are odourless and colourless.

● Non-metals are poor conductors of heat and electricity.

● They do not reflect light.

● Some non-metals are liquids.

● Found running along the centre of the Periodic Table between groups 2 and 3 (the D block).

Trying to put even the basics of the Periodic Table into easy to understand (by me) bite-sizes tested my rudimentary writing skills to the limit.

If you are studying and learning all about the Periodic Table then good on you, and I wish you well.

If you see any mistakes please let me know. 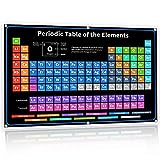