Phaeton and the Chariot of the Sun

No matter the telling of the story, Phaeton was the son of the sun god. For the ancient Greeks, this meant Helios. Helios and his sister Selene, the goddess of the moon, were the children of the Titans Hyperion and Theia. Hyperion was the Titan of Wisdom and Light, while Theia was the Titaness of Brightness. Their third child was Eos, the Dawn.

For the Roman's, a consolidation took place that made Apollo and his twin sister Diana, Greek Artemis, the gods of the Sun and the Moon in addition to their other duties. The story of poor young Phaeton is more popularly told in the Roman version.

Phaeton was born of an Oceanid mother named Clymene. Oceanids were the daughters of the Titans Oceanus and Tethys and served as the nymphs of rivers and streams. By mythological standards, being the child of Apollo and Clymene should have made Phaeton immortal as well, but alas the story would not be the same if he were.

After her time with Apollo, Clymene married Merops, the king of Ethiopia who raised little Phaeton as his own, but as the young boy grew, Clymene told him fabulous stories of his father, Apollo, the sun god. Rightfully so, the boy would brag to everyone he met about his famous father. One day, however, he was playing with another little boy named Epaphos. Now Epaphos had his own claim to fame as the son of Io and Jupiter. For more details see Io-Generations-of-Pain-from-Beauty. Being raised by King Telegonus, also made him the prince of Egypt, so he was not impressed with the claims of his little playmate. Young Epaphos called Phaeton an idiot to believe what his mother had told him about Apollo sending Phaeton running home angry and confused.

Clymene assured her son that everything she had told him was true, but the boy wanted some type of proof. He needed something tangible that he could show to Epaphos and prove he was a child of the heavens. Believing it was time for father and son to meet, his mother suggested that he seek out his birth father for assurance.

Phaeton quickly set out to find the palace of his father at the place where the sun rises in the morning. When he arrived at the home of his father, he found Apollo surrounded by several other gods including Saturn, the god of time and the Venti; Aquilo, Auster, Vulturnus and Favonius (the winds).

Apollo recognized his son straight away and asked why he had come such a far distance. Phaeton, happy to have his father acknowledge him then asked that his father give him something, so that all men would acknowledge that he was the son of the sun god. Apollo offered to give anything that his son should desire that would prove he was his father. Then Apollo went so far as to swear on the River Styx, which is an oath that causes even the deathless gods great suffering if they break it.

Apollo never would have guessed what his son might ask for, or surely, he would not have made such a promise, for when Phaeton asked to drive the chariot of the sun for one day, Apollo begged his boy to make another choice. When Phaeton refused, his father proceeded to tell him all the reasons why this one thing was a terrible request that his father did not want to grant. The god of the sun explained that even his own father, Jupiter, would not dare try to drive the chariot of the sun because of the danger. Phaeton did not budge, so his father continued. Apollo explained that the horses were so strong that even he had trouble controlling them to the point that Tethys, the Titaness of the sea, feared for him each day when he dropped down into her waters. Phaeton still did not budge, so his father continued. He explained that traversing the sky was not simple. If Phaeton did not navigate the poles correctly, he could be carried off into the sky by Serpens, the giant serpant. He also warned that the constellations were dangerous. Taurus would try to spear him with his horns, Leo would try to eat him and both Scorpio and Cancer would try to grab him with their claws. Phaeton still insisted. Apollo then explained that his own horses were dangerous beasts that only he could control, as they breathed fire and were mighty strong. Apollo then begged his son to make another choice, so he would not die, but Phaeton would not back down. He had made his choice.

Phaeton Prepares for the Flight

With a heavy heart, Apollo then led his son out to the Chariot created by Vulcan's own hand. It was glorious to behold made of gold and silver with brilliant gems adorning the harness. Phaeton was still admiring it when Aurora, goddess of the dawn, opened the gates to the heavens. As the sun god's horses were being harnessed into place, Apollo placed a magic potion on his son's face to protect him from the blazing light of the sun.

When all was ready, the sun god gave his son a last bit of advised. He told him not to whip the horses, as they needed no urging to run headlong at full speed. His focus needed only be on reining them in and controlling them. He pleaded that his son follow his, Apollo's, own tracks and not to steer off course. He warned not to fly too high or too low. Finally he made one last plea to reconsider, but when Phaeton did not, his father handed him the reigns knowing disaster lay ahead. The boy step onto his father's chariot.

The horses took off tearing at the gates headed toward the west, but sensing the light weight of the chariot without the sun god, they began to run wild. They quickly veered off the usual path. Phaeton was now gripped with fear. His efforts to control the reigns were useless, as the horses would not obey. Phaeton soared into the sky, and the heat of the sun started to wake the constellations.

Now Phaeton did something he never should have done, he looked down. He was so high in the sky that he saw continents instead of land. He started to tremble and feel sick. How could he have ever thought he was capable of this? What should he do know, holding the reigns was no use, should he let them go? Then he saw Scorpio's claws. He could see it preparing to strike him with its poisonous tale. He dropped the horses's reigns.

The horses now turned from the highest skies toward the earth far below. The chariot streaked past that of Diana's moon chariot, and pulled all moister from the clouds. The land began to crack, and the fields began to burn. All vegetation was dry and dying, forests lit fire as he flew past, and one by one, the cities were burned until nothing was left but ashes. His own people in Ethiopia were scorched, turning their skin dark, but Phaeton had no idea where he was or what he should do. Libya turned to desert, streams and springs turned dry. The chariot flew over the ocean where Neptune raised his mighty fist at the boy. Terra, mother earth, covered her face and cried out to Jupiter that if he wanted her dead, to do it himself with lightning not this terrible never ending burning. Jupiter sought to send clouds to protect the earth, but the clouds were gone, dried up. The Lord of the Gods did the only thing he could. He raised his lightning bolt.

The thunderbolt struck Phaeton killing him instantly and sending him flying from the chariot. The horses now threw off the harness and shattered parts of the chariot. The wheels flew through the air, as they broke from the axle. Pieces fell from the sky leaving wreckage everywhere. Phaeton, burning from the lightning strike, fell to a river where the Naides, freshwater nymphs, quenched his burning body then placed him in a grave. On his gravestone they wrote, "Here Phaeton lies who in the sun-god's chariot fared. And though greatly he failed, more greatly he dared." - Ovid.

The Death of Phaeton

Apollo was devastated. He blamed himself for his son's death, and in his grief, refused to bring light to the world the following day. He sat in the dark with his face covered.

Clymene could find no words to explain her grief. She set out to find her poor son's body with her three daughters. When the Naides lead them to Phaeton's grave, the four of them sat day and night weeping over their loss. After the fourth time, Diana, goddess of the moon, passed over the morning girls, they were transformed in poplar trees.

When Apollo still refused to return to work, the gods came to him, but he, in his grief, cried out that he was tired of his job, a job for which he received no respect. He told one of them to take it on, or if they all felt it impossible, to make Jupiter take up the reigns. He offered that it would prevent his father from striking anyone else with his lightning bolt, and when he saw just how hard a job it was, he would understand that it was not his son's fault. He added that Phaeton should not have died over being unable to control the horses. Jupiter, however, just threatened his son to get back to work. Apollo now had no choice. He took up the reigns and beat the horses with them for killing his son. 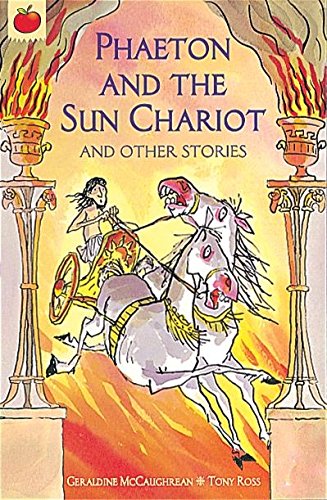 The story of Phaeton is one that almost all middle school students read in language arts class, and there are many lessons to be learned from it. Phaeton got into trouble because of his constant bragging. He also failed to listen to his father and take his words of warning to heart. However, the biggest lesson is in biting off more than you can chew. Driving the sun chariot was far too big a job for the boy who thought he new better then his own father, the god of the sun.