The Philippine national anthem lyrics, versions, facts and complete information are contained in this article. Lupang Hinirang, the Filipino people’s national anthem was originally composed by Julian Felipe in 1898 in the proclamation of independence of the Philippines from Spain. The original lyrics were in Spanish and adapted from the words of Jose Palma’s poetry Filipinas which was written in 1899. The national anthem soon was translated and revised into Tagalog (Filipino) in the 1960s as it is the country’s national language.

The lyrics of the official national anthem of the Philippines, Lupang Hinirang sung in the nation’s national language is here. It is required to be sung in accordance with the musical arrangement and composition of Julian Felipe which is in an instrumental march. 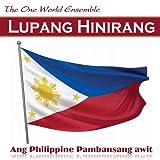 As mentioned, the original verse of the national anthem of the Philippines was in Spanish based from the poem Filipinas by Jose Palma. To those who want the Spanish lyrics, here it is…

Our dear Philippine national anthem had a version in English, too. Lupang Hinirang translated in English, perhaps you’re wondering why. The Philippines is such a beautiful country. It’s like a stunning pearl from the sea and just like many pretty places, many countries got so interested to get it, own it and rule it. So after it has been colonized by Spain, the American government was fascinated by this country of 7,107 beautiful islands in the Pacific so it tried to pursue it. However, the Philippines is so beautiful and so rich of natural resources that the Japanese were enchanted so they dared to fight and die just to grab it. So there was war. Seemed the Americans didn’t want to let go that’s why they stayed and comforted the nation that’s why there was the commonwealth era, where the Philippines was a commonwealth of the United States. Now that you get it, let’s proceed to the

Land of the morning,
Child of the sun returning,
With fervor burning,
Thee do our souls adore.

Ever within thy skies and through thy clouds
And o'er thy hills and sea,
Do we behold the radiance, feel the throb,
Of glorious liberty.

Thy banner, dear to all our hearts,
Its sun and stars alight,
O never shall its shining field
Be dimmed by tyrant's might!

Beautiful land of love, o land of light,
In thine embrace 'tis rapture to lie,
But it is glory ever, when thou art wronged,
For us, thy sons to suffer and die.

Today, the Philippine government is stricter than ever for implementing ways to penalize the people who violate and don’t comply with the prescribed law regarding the singing, performing and honoring the Philippine national anthem. National anthem law according to the Republic Act 8491, the following sections must be strictly followed:

“Sec. 37. The rendition of the National Anthem, whether played or sung, shall be in accordance with the musical arrangement and composition of Julian Felipe.

Sec. 38. When the National Anthem is played at a public gathering, whether by a band or by singing or both, or reproduced by any means, the attending public shall sing the anthem. The singing must be done with fervor.

As a sign of respect, all persons shall stand at attention and face the Philippine flag, if there is one displayed, and if there is none, they shall face the band or the conductor. At the first note, all persons shall execute a salute by placing their right palms over their left chests. Those in military, scouting, citizens military training and security guard uniforms shall give the salute prescribed by their regulations. The salute shall be completed upon the last note of the anthem.

The anthem shall not be played and sung for mere recreation, amusement or entertainment purposes except on the following occasions:

a) International competitions where the Philippines is the host or has a representative;

c) During the "signing off" and "signing on" of radio broadcasting and television stations;

d) Before the initial and last screening of films and before the opening of theater performances; and

e) Other occasions as may be allowed by the Institute.

Sec. 39. All officials and employees of the national and local government, and any agency or instrumentality thereof, including government-owned or controlled corporations, privately-owned entities or offices displaying the national flag and government institutions of learning are hereby directed to comply strictly with the rules prescribed for the rendition of the anthem. Failure to observe the rules shall be a ground for administrative discipline.”

If you’re looking for the Philippine national anthem sheet music, I’ve also included the link here. It contains the original version of the national anthem song composed by Julian Felipe. It is free to download by the way so enjoy.