Pocahontas - Powhatan Princess - The fascinating story of an American princess and Great Britain.

Pocahontas was a real life First Nation American Colonial Figure much glorified by Hollywood and Walt Disney who distorted her history and the story surrounding her life quite shamelessly.

History suggests it is most likely she was born in 1595/6 at Werawocomoco (what is now Wicomico, Gloucester County, Virginia) on the north side of the Pamaunkee (York) River. She was one of the favourite daughters of the 60 year old Chief Wahunsonacock Powhatan who ruled over some forty Algonkian Indian villages that were spread about the shores of the rivers now called the James and the York, which flow into Chesapeake Bay.

Her father Powhatan named her Mato-aka but in private called her "Pocahontas", originally thought to mean "Playful little Girl". Her true name, Mato-aka, was only used within her tribe.

She would not have seen white men until May 1607 when a group of Englishmen landed at Jamestown and she took a liking to a Captain John Smith. This first meeting of Pocahontas and John Smith has become an exaggerated and romanticized event, but the two initially became friends after their first encounter. Relations between the English and the Indians continued to be generally friendly for the next year, and she frequently visited Jamestown. She carried messages from her father and accompanied Indian villagers bringing food and furs which were traded for hatchets and trinkets. In October 1609 Pocahontas was told that her friend John Smith was dead. This was not true but he had been badly injured by a gunpowder explosion which forced him to return to England. Pocahontas was dismayed and eventually married an Indian pryvate Captayne named Kocoum in 1610. She lived in Potomac country among Indians, but her relationship with the English settlers was not over.

A member of the Jamestown settlement, Captain Samuel Argall, learned where she was, and in collusion with Japazaws, one of the lesser chiefs of the Patowomeck Indians, devised a plan to kidnap her and hold her for ransom. The two lured Pocahontas onto a ship and when told she would not be allowed to leave, she "began to be exceeding pensive and discontented," but had little choice but to accept her captivity. Argall sent a message to Powhatan saying that he would only return his favourite daughter when the chief released the English prisoners he held, the arms and money that the Indians had stolen, and also a quantity of corn. Powhatan gave this some thought and sent only part of the ransom asking only that they treat his daughter well. Argall finally returned to Jamestown in April 1613 with Pocahontas, and she was allowed to move to a new settlement, Henrico, under the leadership of Sir Thomas Dale. Pocahontas was encouraged by the Reverend Whittaker to start her education in the Christian Faith and to adopt the name of Rebecca, and it was here that she met a successful tobacco planter named John Rolfe in July 1613. She had relative freedom within the settlement, and acted as a go between the Henrico colony and her people. Almost a year since her being taken hostage, Dale brought 150 armed men and Pocahontas into Powhatan's territory in order to force payment of the entire ransom. They were immediately attacked by the Indians, and in response the Englishmen burned many houses, destroyed villages, and killed several Indian men. Being of little further use as a bargaining piece Pocahontas was finally released ashore where she was reunited with two of her brothers. She freely told them that she had been treated well and that she wanted to marry Englishman John Rolfe who she said she loved. Surprisingly Powhatan gave his consent to this, and the Englishmen departed and although they didn’t get the remainder of the ransom a peace-making marriage was a great triumph. Sir Thomas Dale returned to London in the spring of 1616, to seek further financial support for the Virginia Company. He was a great one for publicity; and brought with him about a dozen Algonquian Indians, including Pocahontas with her husband John Rolfe and their young son, Thomas, The arrival of Pocahontas in London was a great success and novelty and she was presented to King James I, the royal family, and the rest of the cream of London society. An unpleasant surprise for her was the meeting in London of Captain John Smith, someone who she had considered a friend she had not seen for eight years but had spent this time spreading lies about their relationship in Virginia. After seven months Rolfe made the decision to return his family to Virginia and on 21st March 1617 they set sail. Within a matter of hours Pocahontas fell gravely ill and it was soon obvious that she would not survive the voyage The actual illness has never been identified, it may have been pneumonia, tuberculosis or possibly smallpox. She was taken ashore at Gravesend and given excellent medical aid, but, as she lay dying, she comforted her husband, saying, "All must die. Tis enough that the child liveth." She was buried in the chancel of St. Georges Church – Gravesend at the tender age of 22 years old.

In 1618 Pocahontas father, Wahunsonacock Powhatan died and was replaced by his brother, Opitchapan Powhatan who in turn was superseded by his younger brother the noted Opechancanough Powhatan chief of the Algonquian Indian Tribe

In 1995 Walt Disney released an animated film about the Powhatan woman known as Pocahontas. Although he claimed the film was “responsible, accurate, and respectful." It was nothing of the sort. Members of the Powhatan Nation offered their assistance on both cultural and historical matters but were rejected out of hand.

Although our information describes the nickname Pocahontas as “Playful little girl”, the Powhatan nation say that it more accurately means “The naughty one” or “Spoiled child”. The unlikely legend that a 10-11 year old Pocahontas saved the heroic John Smith from being clubbed to death in 1607 by her father Powhatan is very unlikely. John Smith was far from heroic and was described by his own people as an abrasive, ambitious, self-promoting mercenary soldier.

The truth of the matter is that the first time John Smith told the story was 1624 and was one of at least three different tales told since his return to London. The fact of the matter was that John Smith had been offered comfort, warmth and food by the Powhatan nation during a severe winter as an honoured guest. The reason for changing the story was to justify war on the Powhatan nation. It was only after the death of Pocahontas that John Smith invented the story of him being saved by the young girl.

Many consider this to be the start of the Indian wars where previous friendships had turned to war and many Indian nations were driven from their homelands by the greed of certain Euro-Americans.

John Rolfe’s wife Pocahontas was buried in the chancel on 21st March 1617 and the entry in the burial register recorded Mrs Rebecca Rolfe – a Virginia lady, but the church, along with some 110 houses were destroyed in the Great Fire of Gravesend on 24th August 1727. The current church was rebuilt between 1731 -1733 by the accredited architect Charles Sloane. There is an engraved stone tablet near the entrance which has an unfortunate spelling mistake - instead of 'Here no envy dwells' it reads 'Here no envy swells'. In 1958 the church was re-opened as the Pocahontas Memorial Chapel and Gardens and then in 1962 was fully re-opened as a church when both Holy Trinity and St. James church was also demolished and so St. George's regained its parish status. In the church grounds stands a bronze statue by American sculptor, William Ordway Partridge, unveiled in 1958 by the Governor of Virginia and in 1914, a tablet and stained glass windows were donated to St. George's Church. These were given by the Society of Colonial Dames of America, and they refer to Pocahontas as "the friend of the earliest struggling colonists".

The destruction of the church also brought about the loss of graves and tombs including that of those people of great respect in the chancel. The church petitioned for the exhumation of the human remains discovered following the fire but not all petitions for the exhumation and return of human remains from consecrated burials are successful. For example the remains of Pocahontas (Mrs Rebecca Rolfe), the daughter of the Native American Indian Chief Powhatan, were buried in the graveyard of St George’s Church, Gravesend, in 1617. Although they are known to be there the exact location following the fire and disturbance of the church ruins during rebuilding makes any application doomed to failure.

That’s not to say several attempts to identify remains have not been made and a common grave was opened on the 31st May1914 and the skulls and bones examined and measured by pathologists who could still reach no conclusion. In 1923, a group of Americans known as the Pocahontas Memorial Assn. was granted permission from England's Ministry of Home Affairs to make an exploratory dig but the search proved fruitless. With advances in forensic science it would be possible to identify Pocahontas skull and using DNA samples from her known relatives to differentiate the remains from others of English origin. However, because of the considerable disturbance to the resting place of hundreds of others since 1617, the Church would be unlikely to grant further permission.

"She's in glory with God no matter where her bones are buried."

In the current church on the south side of the Chancel is a marble tablet inscribed with following words:

“This Stone commemorates Princess POCAHONTAS of METOAKA Daughter of The mighty American Indian Chief POWHATTAN. Gentle and humane she was the friend of the earliest struggling English Colonists whom she nobly rescued, protected and helped. On her conversion to Christianity in 1613 she received in Baptism the name Rebecca and shortly afterwards became the wife of Thomas ROLFE, a settler in Virginia. She visited England with her husband in 1616, was graciously received by QUEEN ANNE, Wife of JAMES I. In the twenty second year of her Age she died at Gravesend while preparing to revisit her native country and was buried near this spot on March 21st 1617.”

John Rolfe returned to Virginia leaving his son Thomas to be raised by his Norfolk family. It is recorded that following his father’s death, Thomas left England for Jamestown and in the Indian wars that followed ended up fighting against his uncle Powhatan and his own cousins Thomas Rolfe married twice and many claim to be descended from Pocahontas via him, including such notables as Mrs Woodrow Wilson and Lady Mountbatten. 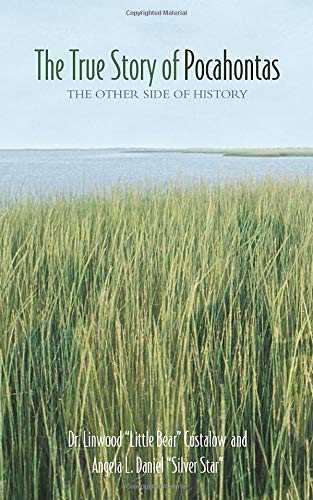 The True Story of Pocahontas: The Other Side of History
Buy Now

Do you think Walt Disney gave an accurate version of Pocahontas

3.7 out of 5 stars from 3 ratings of Story of Pocahontas