Project Bow's FAQ: Why is it called a lexigram when it looks like a word?

At this point in his development, Bow no longer needs lexigrams. He is literate and he spells out his own words. Bow developed literacy at the age of five and half years. But before that, we used lexigrams. And our lexigrams looked kind of like this:

Now, you might be thinking: "Hey, that's not a lexigram. That's just a word." Well, if you were thinking that, don't feel bad. A lot of people, including renowned primatologists and linguists, had the same reaction when they were first introduced to this concept.

So the question is: what is a lexigram and how do we recognize one?

Is the photo for the English word "banana" that I've posted above a "spelled-out" word or a holistic lexigram? The answer depends on who you are. Can you read English? If so, you probably know how to sound out the word as well as how to pronounce it and what it means. You realize that the way the word is composed of subparts is not entirely arbitrary and unmotivated. You know that there is a relationship between the sounds that the English word "banana" is composed of when spoken and the sequence of letters that make up its written representation. But if you are someone who has only been taught that this symbol in the box stands for the English word "banana", without knowing anything more about it, the way Bow once was, then for you, it is a lexigram.

Like beauty, whether or not something is a lexigram is in the eye of the beholder.

Some Examples of Bow's Lexigrams in Both Hebrew and English

Chimpanzees cannot produce speech that humans can comprehend. It's an articulatory problem that has nothing to do with innate language ability. A human with a malformed vocal tract or a missing larynx would have the same problem. There are many methods of communicating without vocal speech: sign language and lexigrams chief among them.

When choosing sign language, one can select a particular sign language used by the deaf community, such as ASL, or finger spelling, as was used in the case of Helen Keller, or one can decide to make up one's own sign language especially for the child or chimpanzee in question. Many isolated families with deaf children started out using their own special system of signs, called home sign. There are many disadvantages to this choice, not the least of which is the fact the child remains isolated and can only communicate with family members. Speakers of a standard sign language can speak with the deaf community, but they must learn spoken languages as if they were a foreign language. Fluent speakers of ASL often write English as if they were foreigners, struggling with syntax and grammar and word choice, even though they may have grown up around native English speakers all their life. It isn't just a question of pronunciation. ASL is a completely different language from English, with its own distinct grammar.

In choosing lexigrams for Bow, I was following in the footsteps of Duane Savage-Rumbaugh and Sue Savage-Rumbaugh. But while their use of lexigrams was more like "home sign", I wanted Bow to be able to communicate with the entire world.

For this reason, I chose lexigrams in three standard human languages. Our lexigrams consisted of words written in the standard orthography of the language in question. The three languages were Hebrew, English and Mandarin Chinese. You can see examples of our earliest lexigrams here.

Eventually, because we did not have enough volunteers who spoke Chinese fluently, we had to drop Chinese from our list of languages at Project Bow. Bow grew up bilingual, speaking Hebrew at home and English with outsiders.

A Brief History of Lexigrams

Wouldn't it have been easier to use iconic pictures for our lexigrams? Wouldn't that have spared Bow the trouble of having to deal with the arbitrariness of the orthographies in English and Hebrew? The answer is a resounding no! However, in order to understand why, it would help to know a little about the history of lexigrams, both in ape language studies and in the ancient world.

In the 1970s Duane Savage-Rumbaugh worked with a female chimpanzee named Lana using plastic lexigrams and a made-up language called Yerkish. Lana was two and a half years old when she started the project, and she helped to demonstrate that chimpanzees were capable of manipulating symbols. This was very important pioneering work in the field of ape language studies. However, because Yerkish was not a standard language, nobody was a native speaker of Yerkish, and many issues involving natural language acquisition and grammatical usage could not be tested. Likewise, Lana did not have the opportunity to use Yerkish with a broad spectrum of interlocutors. Many things about the experiment were unnatural, and so the highest language potential of chimpanzees could not be demonstrated.

Sue Savage-Rumbaugh went further with lexigrams in her work with the bonobos Matata, Kanzi and Panbanisha and their growing family. This time, there was no artificial, made-up language involved. The bonobos were exposed to spoken English, and the lexigrams they used stood for English words.

However, the lexigrams that were used emphasized picture recognition, and even when they sometimes contained English words in standard orthography as part of the picture, the approach was to make the color and the font and the general appearance more important than the letters.

A keyboard with Some of Kanzi's Lexigrams

From Trademarks to Lexigrams

Take, for instance, the lexigram for Perrier water. It looks very much like the Perrier trademark. It includes the letters P-e-r-r-i-er, but as with all trademarks, that isn't the most salient feature. There is the green circle and the font and the overall look of the thing to contend with.

The emphasis on non-alphabetic cues has the effect of hiding the alphabet in plain sight, making it less accessible to the subject. This is not a good thing, for grammatical reasons as well as for purposes of communicating with the outer world.

Here is an experiment you can try at home, if you are an English speaker. Download Kanzi's keyboard for yourself -- or create your own lexigraphic keyboard -- and try to communicate with others in English using only the words for which you have lexigrams. Here is what you will find: not only will you be extremely limited in your vocabulary, but you will also find yourself using a kind of pidgin English. Why? Because English has inflection, and in order to speak grammatically, you have to use it. Even if you have special lexigrams for -ing or -ed or -s, how are you going to handle see/saw or eat/ate/eaten?

Other languages, such as Hebrew or Latin or Turkish have even more grammatical morphology than English. This is why, long, long ago, the ancient Semites went from using lexigrams to using symbols to stand for speech sounds. That is in fact how much of mankind came to use the same alphabet. The Greeks borrowed it from the Phoenicians. The Romans borrowed it from the Greeks. The English that you and I use on Hubpages is written in letters borrowed from the Romans. Did you know that the letter "A" derives from semitic Aleph, and that it used to be a picture of the head of a bull?

From Lexigram to Letter: The History of Aleph

The alphabet is a great invention, but many people assume that it requires a great deal from writers and readers, and that acquiring literacy is a sign of some kind of major intellectual achievement.

In fact, alphabetic writing requires less of speakers than does lexigraphic writing. The great achievement of our current writing system is its simplicity and the way it mimics what we are already doing when we speak.

Instead of memorizing long, long lists of words and their pictorial representations, an alphabetic writing system allows you to write any word you can say, without special training. (This is less true in English than it is in Hebrew, because the English writing system is less phonemic, but that is a different story for a different hub.)

Roman A: Not an Original Invention

One of the claims made against chimpanzees and bonobos who use lexigrams is that they do not speak grammatically. This is not because they are not human. It is a function of the mismatch between lexigrams and the inflectional language that they are supposed to model. Anyone would have the same problem when limited to this means of communication.

As long as Bow had to limit himself to lexigrams, he didn't appear to have grammar, either. But the moment he started spelling out words, that problem completely disappeared.

We didn't teach Bow how to read. He figured it out spontaneously, much as a baby learns to understand speech. When a baby learns language, he does it by attending to the speech in his environment.  At first the words and sentences seem like indivisible wholes. Then, gradually the child discovers phonology. He realizes that words are made up of a limited inventory of vowels and consonants. He unlocks the secret to language.

But isn't reading really hard? Not really. What's hard is not having access to the subcomponents of words and still being expected to use language productively. In a sense, to keep the alphabet hidden from a chimp because you think he can't make it out is like deciding to use holistic pre-verbal cries while conversing with your infant, because he hasn't yet acquired phonology. He'll never acquire it, unless you give him a chance. Exposure and immersion is key.

One of the contributions of Project Bow to ape language studies is the use of lexigrams composed entirely of words in standard orthography. By doing this right from the beginning, we allowed Bow to discover the alphabet for himself. 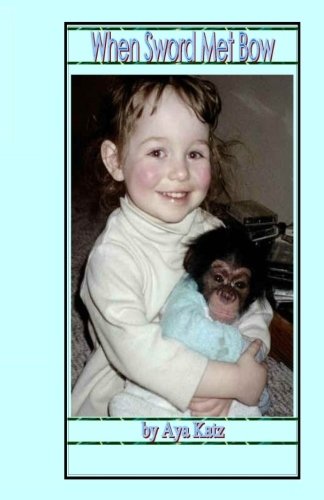