Welcome to my Quantum Mechanic's Series if you havn't been to my central hub on the matter visit it here. If you are more interested in Erwin Schrodingers Cat thought experiment.

Erwin Schrodinger was born 12/08/1887. He was born in Vienna, His fathers name was Rudolf Schrodinger, he came from a Barvarian family and was highly gifted and well educated he wrote many papers on botany and plant phylogeny. His mother was the daughter of the famous Alexander Bauer who was Erwin's fathers professor of chemistry at the Technical College in Vienna.

At School Erwin Schrodinger had a wide range of interests, he loved all the scientific subjects as well s Gym and German poetry and grammar. All in all he just loved absorbing knowledge from books.

From 1906-1910 he attended the University of Vienna. Whilst here he met some amazing utors including the influential figures of Fritz Hasenohrl, Boltzmann's successor. It was here that Schrodinger focused a lot of time on the eigenvalue problems, which laid the foundations for the GREAT work he would produce in the future. Franz Exner and Schrödinger’s friend
Kohlrausch were massive in developing the experimental skills which would be vital in his future.

In 1914 Erwin Schrodinger joined the Austrian Forces, he participated in the war as an officer in the Austrian Fortress Artillery and stayed here till 1918, very little is known about this phase of his life.

The next points in his life to note was in 1920, this was a great year for Schrodinger he married his wife Annemarie Bertel. In the same year he took an academic position as an assistant to Max Wien, in September of this year he attained the position equivalent to associate professor in the US or Reader in the UK in Stuttgart, here he developed the
foundations for his career as a brilliant academic mind. In 1921 he got a position at Breslau as a full professor, this is an extraordinary speedily assention up the university career ladder!

Finally settling in Zurich, here he developed wonderful friendships with Hermann Weyl and Peter Debye. It was one of his best periods, being actively involved in pushing the boundaries of theoretical physics. He primarily focused on specific heats of solids, problems in thermodynamics (especially Boltzmanns probability theories) and of the atomic spectra.

His GREATEST discovery occurred in January 1926 when he published his paper "Quantisierung als Eigenwertproblem" which is the eigenvalue problem, on wave mechanics and what is now famously known as Schrödinger’s equation (see image below). 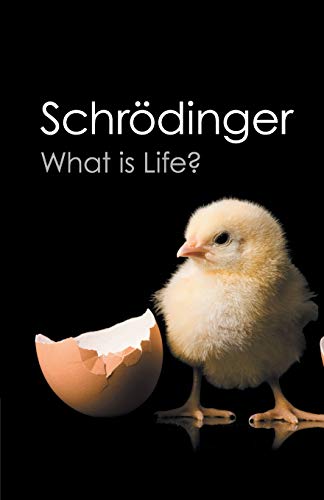 What is Life?: With Mind and Matter and Autobiographical Sketches (Canto Classics)
Buy Now

In this paper he derived the wave equation for time independent systems, showing that is gives the correct eigenvalues for hydrogen-like atoms. This paper has been celebrated as one of the most important discoveries in the 20th Century and created a revolution in quantum mechanics and for which he shared the Nobel Prize with Dirac in 1933!

Schrodinger then released a further three papers which solved the quantum harmonic oscillator, the ridged rotor and the diatomic molecule problems. They also showed that his approach to quantum mechanics was equivalent to that of Heisenbergs. The final paper showed how to treat problems in which systems change with time as scattering problems.

These papers were all released within 8 months and were the biggest achievement of his not so humble career and revolutionised modern physics.

Schrodinger took part in weekly colloquies, however in 1933 he decided he had to leave mainly due to Hitler coming to power as he disliked the Nazi’s politics.

So he became a fellow at OxfordUniversity, he was only here for a very short time as the university disagreed with his personal life especially his infidelity and having 2 wives.

So he went on to work at PrincetonUniversity in 1934, however he didn't take a permanent position here as he continued to have problems with acceptance of his multiple wives, especially as one was married to another man.

During these troubling times he had many correspondences with Einstein and produced another of his greatest works; Schrodinger's Cat, this was developed because he didn't like one of the interpretations of Quantum Mechanics and the effects on large scale systems such as life, see this hub for more information.

In 1936 Schrodinger took up tenure in University of Gratz in Austria after much deliberation. He had mixed feelings and was torn between the longing to head back home and the risks of moving to a small fairly unknown university, but the longing for home won out!

With the annexation of Austria in 1938, Schrodinger was thrust into difficulty due to the fact that he had left Germany in 1933 and was taken to be an anti-Nazi act, during this time he was forced to recant his anti-Nazi stance, this was one of the greatest regrets of his life, one for which he apologized to Einstein personally for!

However soon after he managed to escape to Italy, he took temporary positions in Oxford and the Ghent, and after a short stay moved the newly set up Institute for Advanced Studies in Dublin, where he became Director of the School of Theoretical Physics and remained until 1955, he became a citizen of Irelandand wrote a further 50 papers during his time here.

These papers focused on a variety of problems including the problem of unifying gravity and electromagnetism, which was the problem that took over the last few years of Einstein’s life and still today remains unsolved. He wrote a well known book called "What is Life" in 1944 which contains a discussion of Negentropy and the concept of a complex molecule with the genetic code for living organisms and was very interested in atomic physics.

During this time he remained committed to his particular passion; scandalous involvements with students occurred and he fathered two children by two different Irish women

In 1956 he returned to Vienna, Schrodinger did not like the wave particle duality and tried to develop theories for waves only leading to controversy with other physicists.

His health started to degenerate soon after arriving in Vienna, Erwin Schrodinger sadly died on 04/01/1961 of TB, he was buried in Alpbach Austria.