It has always been my conviction that the basic insights of the great philosophers can be rendered in pleasing, non-technical prose for everyone to understand. The great ideas arise as a result of experienced reality, a reality shared by everyone. When one strips away the technical language--important in some contexts, but not in others--one is left with that way of seeing and understanding a lived reality that is within the reach of any moderately intelligent mind.

In this way I am trying to render Heidegger's The Question Concerning Technology, a nearly-impenetrable text to the uninitiated. Leaving the various historical influences on Heidegger aside--Kant, Hegel, Brentano, Husserl--I shall be focusing entirely on what the core insight of Heidegger's essay is, an insight which is beautiful and thoroughly comprehensible by the intelligent reader.

At the heart of Heidegger's insight is that what constitutes truth has been limited in the history of the Western world. Generally truth is thought to be limited to knowledge, to facts about the world. Heidegger thinks this is a dangerous limitation that history has imposed upon humanity. Truth, for Heidegger, is what he calls 'revealing,' which embraces more than just knowledge; it embraces all the ways in which we can relate to the things of the world. Humans are not just pure knowers. We have lives, goals, desires, personalities, and a position in history that play roles in determining how we relate to the objects around us and how we manipulate them. For instance, if an atheist and a believer both look at a church, the one might see it as a beautiful work of art and sketch it, whereas the other might see it as a sacred place of the divine and want to pray in it. To the atheist, the church reveals itself as beautiful and to the believer as holy. For Heidegger, the church is revealing aspects of its beings differently to different people according to their attitudes towards it. But both are true. Both are aspects of the being of the church. All ways of revealing are true, because revealing is truth. Even emotion is a way of revealing, because it is a way of relating to the world. Being frightened of a spider reveals the spider as scary. Being in love reveals the object of love as lovely. These are true aspects of the spider and the loved-one.

When Heidegger investigates 'the question concerning technology' he is interested in the essence of modern technology, not just any technology; for it is modern technology that poses the problem. Heidegger presents as an example of traditional technology peasant farming. The relationship of the peasants to the land is one of respect: they tend the land, are stewards of the land, cultivating it, synchronized with its patterns, to let the crop develop out of it. Modern technology, however, exploits the land as pure resource, trying to gain the 'maximum yield at minimal expense'. Modern technology challenges the land, or whatever it happens to be exploiting, to yield more. Objects are thus revealed as pure resource. Objects are exploited for all the energy or use they can yield and are left to stand there until they are to be challenged for more use again. For instance, the dam on the Rhine reveals the Rhine as merely a resource for hydroelectric power. Even viewing the Rhine for its beauty has been made into a tourist industry, again exploiting the Rhine as a resource for tourist gratification and photos.

The problem with modern technology is that, to order the world as pure resource requires that everything in the world be seen in the light of the modern scientific mind. This way of relating to the world views everything as a 'calculable coherence of forces.' Modern physics is a product of this way of relating to the world and it is used to justify it, and to produce the machinery that reveals the objects of the world as mere resource. The problem is that seeing everything in the world as merely resource in this way dominates the consciousness of humanity. Of all modes of revealing, the mode corresponding to modern technology is unique in excluding other modes of revealing. It is this mode of revealing that limits what counts as truth only to (scientific) knowledge. Heidegger does not claim that scientific knowledge is not true, as it too is indeed a mode of revealing; but Heidegger contests that it is not the only truth and it should not have the monopoly on truth. It is only one mode of revealing, one way of relating to the world, amongst others. The objects of the world really do have the aspect of being resources, a calculable coherence of forces, objects of scientific knowledge, mere relations of cause and effect. However, they can be appreciated aesthetically, poetically, religiously, and all of these modes of revealing are also truth.

As mentioned in the first paragraph, revealing is a relationship between humans and the world. Corresponding to the way reality is revealing itself to humanity is a way in which human consciousness is constituted. It is more than just an attitude; it changes us. Seeing the world as calculable coherence of forces makes us mere calculators destined to keep exploiting reality. The pinnacle of human achievement is seen merely in mastering this reality, dominating nature. All the many facets of nature not being revealed to the mere calculator of a human, the spirit is depleted. It is the ability to reveal nature that gives humans their dignity; by limiting revealing to mere calculation, this way of relating to nature strips away human dignity. The fullness of human consciousness depends upon the fullness with which consciousness allows nature to reveal itself in it. To be richer in spirit we have to experience a greater variety of truth; but reduced to calculators, we cannot. Heidegger thus sees no danger in technological inventions at all, but in the way of relating to the world that has occasioned them which prevents us not just from experiencing alternate modes of revealing, but from even accepting that revealing is truth.

The solution, for Heidegger, is not to do away with the technological way of relating to reality. That is not an option anyway. The technological way of revealing arose historically and we are stuck with it. However, we can do away with its dominance, which is the real problem. We can do so by recognizing that this way of relating to the world is really just one way of relating to the world. Heidegger further suggests an alternate way of relating to the world, one which held sway, he claims, in Ancient Greece. It is the way of the craftsman and the artist. For Heidegger, this way is a counter-part to nature. In the way nature lets a tree come into being out of a seed, a craftsman lets a pot come out of some clay. The pot was potential in the clay and the craftsman allowed nature to present itself in this way. One is more a part of nature rather than set against it, in a symbiotic relationship with it that allows reality to reveal itself to us in a myriad of ways. 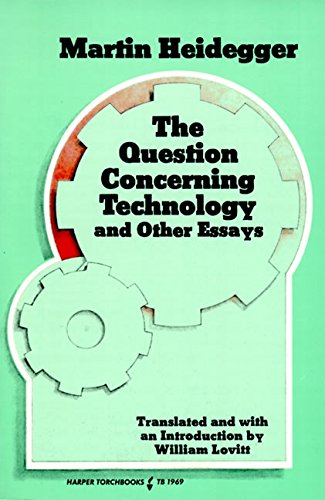 Question Concerning Technology, and Other Essays, The
Buy Now