Butterflies are one of the most beautiful creatures in the world. Below are some of the rarest, not to mention most beautiful, flighty and colorful butterflies that, fortunately.are still alive and thriving today.

The duke of Burgundy (Hamearis lucina) is a native of the UK and is fond of clearings and grasslands. The females of the species are the wandering sort while the males are the more territorial. For males, the average wingspan is 1.1–1.2 inches while the females' average 1.2–1.3 inches.

The glasswinged butterfly (Greta oto) is found in Mexico through Panama though some species have been spotted in Venezuela. The males of the species are known to lek (gather together). The translucent wings can grow as much as (tip to tip) 2.4 inches. The "glass-like" appearance of the wings is due to the lack of tissues or scales between the veins.

The name "kaiser-i-hind" literally means "Emperor of India" and this butterfly that is native to India belongs to the swallowtail family. Teinopalpus imperialis is made unique by the wings' green iridiscence.

Belonging to the swallowtail family, the mutated spangle butterfly (Papilio protenor) was previously considered extinct until their rediscovery in India where they are believed to be native species.

Named after Queen Alexandra of the UK in 1907, Queen Alexandra's birdwing (Ornithoptera alexandrae) is the largest in the world with the female's wingspan reaching a length of 12.2 inches. They are considered one of the strongest flyers in the butterfly world.

The Palos Verdes blue (Glaucopsyche lygdamus palosverdesensis) is considered by many as the rarest butterfly in the world and, unfortunately, also an endangered species. They are limitedly distributed to the Palos Verdes Peninsula in California are relatively small with an average wingspan of only 0.97 to 1.17 inches.

Although the pearl-bordered fritillary (Boloria euphrosyne) occurs in various parts of Europe, its number has rapidly declined through the years making it rare and slightly threatened. The species has an average wingspan of 1.4 to 1.7 inches and is made unique by the markings on its wings that look like pearls.

Found in the Philippines, Malaysia, Borneo and Sumatra the Saturn butterfly (Zeuxidia amethystus) has an average wingspan of 3.9 60 4.3 inches. The males of the species has a deeper, stronger color than their female counterparts. The butterfly prefers the meat of rotting fruits.

The silvery meadow blue butterfly (Polyommatus florience) has been spotted in Pakistan, Afghanistan and more recently in Himachal Pradesh, India. The species are believed to make meadows and clearings its habitat. 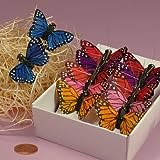