Who Were the Rus Vikings?

The Rus Vikings Were Traders and Explorers

The ancient warrior culture known as the Vikings are often portrayed as marauding pirates who love raping, pillaging and the occasional horn of mead. Yes they did do these things, but they also traded with other cultures and built the infrastructure of some of the most beautiful and metropolitan cities of the old world. {I have listed a few cities that began life as a Viking settlements}. The Vikings often took prisoners from raids and battles, which were sold into slavery. But in their defence most other societies at the same time held similar practices.

The Vikings were not technically a single race, as they had their origins in a Germanic culture that worshipped both conflict and the harvest. But if you were to visit a Viking town in 900 A.D the inhabitants would be ethnically mixed and so would the make up of their family units. The Vikings took opportunity were they found it. Unfortunately for the owners of the superior land, the Viking mindset was not given over to compromise with those who were defeated.

The Vikings who Headed East

The Rus Vikings were the Swedish raiders and traders who settled deep into modern Estonia, Ukraine and Russia. The superior seamanship of the Swedish settlers allowed their ships to navigate the Volga river to travel deep within the lands of the Central and Eastern European peoples. The Rus Viking legend tells us that the Finn and Slavic peoples initially resisted the Rus Viking incursions.

The Finns and the Slav's decided that the Rus Vikings could prove useful in maintaining order of their lands. They decided to ask three brothers who were noble princes to come to their plentiful lands to keep order and rule justly over all the peoples of the lands.

The Rus Vikings and Their Dragon Ships 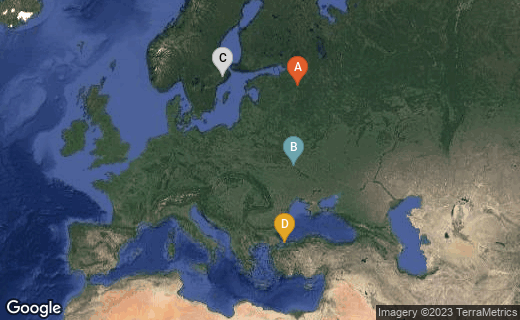 Many Swede's left their homeland for adventure and riches in the East.

The site of the former Capital of the Byzantine Empire

The Rus Vikings originally came into their lands to trade with the native tribes, as soon as trade developed thriving market towns and ports burst into life. The Swedish settlers initially built fortifications to protect their trading posts. This was a new experience for many of the new settlers,as mainland Sweden had geographical protection from its off shore islands. The towns of Novgorod and Kiev grew rich on the back of trade between the Rus Vikings and traders from the lucrative Black Sea and eastern European markets.

From the secure Viking settlements, the Rus stretched out deeper into Eastern Europe to trade. The Rus Vikings were full of ambition and the expansion eastwards would guarantee many of the Rus Vikings their fortunes. The Rus Vikings arrived in Constantinople in 838 A.D, They claimed friendship with the Emperor and told him of their Swedish heritage. It is believed that the Greek speaking Byzantines gave the Swedish Vikings their name Rus. It is derived from the Greek word "Rusiori " which was ancient Greek for blond. It is entirely likely that all the of those called Rus Vikings would be of Nordic ancestry.

There was a considerable amount of trade between the Rus and the Byzantine Empire. The Vikings traded furs and captured slaves in return for silks and other luxury goods that Constantinople had to offer. Silk was highly desired by the Vikings as they had never seen silk before. Some Rus Vikings had tried to raid Constantinople, but never with any real conviction. To assault a city of Constantinople's size would have been a massive undertaking. Instead the Rus Vikings decided to raid the Monastery of Trebinthos on Princes Islands, they used exactly the same tactics as their fellow Viking's used when raiding the monastery at Lindisfarne Island in the eighth century.

By 941 A.D The Rus Vikings and Byzantine Empire had decided that continued trade and peace would be preferred as it was a good profitable arrangement. The Byzantine Emperor even had Rus Vikings in his own personal bodyguard. The Rus warrior's were highly valued as their military prowess and bravery was legendary. After the Norman Conquest in Great Britain, these numbers were diminished due to an influx of cheaper Anglo-Saxon exiles.

Rus Vikings and Their Settlement in Russia

The Rus Vikings inter married and interbred with the Slavic population and by the year 1000 AD the children of the Swedish traders had become as Slavic as the general populace. Although still of Viking descent, the Rus Vikings would eventually forsake their pagan roots and convert to Christianity. The original Rus continued to move on into Asia and there are reports of Rus Viking's been used as a mercenary force by the Muslim world.

The Rus visited Baghdad and traded white slaves for Silver as the Muslim world had a vast amount to trade with. The Rus Vikings had a good trading arrangement with the Muslim world and there was only one major sea battle which the Vikings lost. The Rus left their legacy in the name Russia, and they explored deep into were other Europeans dared not tread.