STL and Ferguson: A Tale of Two Cities

St. Louis native who lived in Ferguson for a year prior to the riots.

St. Louis struggles over peace and justice in the controversy over Michael Brown, a town divided and torn. Saddened by the tragedy and the effect on their hometown, St. Louis stuggles to retain peace and dignity among chaos and violence on their streets.

Responses are fired with anger on both sides, and met with an avalanche of often impulsive and raging verbal battles. The battles are waged everywhere from social media to restaurants and street corners.

The Charles Dickens tale, A Tale of Two Cities involves major themes of duality and revolution, also resurrection. Certainly the first two themes apply to Ferguson, MO. We certainly hope that Ferguson and St. Louis can be resurrected to a more peaceful place.

When Ferguson Blew up Media

The avalanche of anger, hatred and media hype over the Ferguson shooting hit hard on all sides and even made international news! People in Canada, Europe and Australia asked me about Ferguson during that era. Media coverage was frantic for awhile. Some say media didn't tell the entire story and that coverage was biased.

August 9th was the day of the shooting when protests and riots broke out in Ferguson. A few months later on November 24th the Grand Jury decision finally returned, and violence broke out again. White police officer kills black unarmed teen, and no indictment. The scab was ripped off the nasty wound to St. Louis again. Fiery riots in the streets, looting and violence. Again.

How many cities around the world held protests on the night the Grand Jury decision about the Ferguson shooting was returned? (Huffington Post)

During the 1960s a huge complex of high rise units for low income housing in the inner city of St. Louis (Pruitt-Igoe) failed miserably. It was destroyed and in the next few decades section 8 apartment complexes invaded much of north county.

Communities in north county St. Louis became saturated with large numbers of poor families, many unemployed and on government assistance. These area became overloaded with poor unskilled people without job opportunities. Residents feared a rise in crime rate and the trend of 'white flight' spread across northern St. Louis County.

Ferguson was just one of many municipalities where demographics drastically changed. Maybe the most dramatic fall was in the community of Spanish Lake, but 'white flight' has also effected Florissant, Hazelwood, Jennings, Riverview, Pine Lawn, Normandy and other areas especially in north St. Louis county.

A Movement for PEACE in Saint Louis

The indictment is only a summons to trial to further investigate evidence. It is not a guilty verdict.

There was no actual evidence about what transpired when the police officer confronted Michael Brown. Did Michael Brown respond with expletives when asked to get to side of the road? Did Officer Wilson then lose his temper and attempt to grab Brown, causing the struggle to begin? Many of the 'eye witness accounts' of the actual shooting were discredited by physical evidence, and the rest were very inconsistent.

Spanish Lake
Documentary about another small community not far from Ferguson, MO where similar issues arose. White flight and racial profiling are clearly driven variables in the fall of Spanish Lake, MO. Two communities, similar history and trends. The 'Spanish Lake' documentary is now available on Netflix. This important documentary film was directed by Phillip Andrew Morton, St. Louis native. It was due to release at Wehrenburg Theatres within weeks of the Ferguson shooting. However due to the violence and chaos, the film was not allowed to be shown. Owners feared violence at theatres, despite the fact that the film contains no racist bents at all, quite the contrary. A balanced and informative documentary that reveals urban events that may shock even St. Louis natives. Now available on Amazon for purchace or rental.
Buy Now

Peaceful Protesters VS Violence and Looters

Efforts of protesters were hijacked by violence and looting. Still the media often refers to looters as protesters, when they are actually quite different. Looters grab the opportunity of a protest to loot stores, yet in some cases, protesters even tried to protect store owners from looters.

Looters appear after natural disasters like hurricanes and tornadoes, too. Nobody is protesting against mother nature. It's chaos, and crooks will take advantage of chaos.

True peace is not merely the absence of tension - it is the presence of justice.

Darren Wilson will not stand trial, but our criminal justice system absolutely must.

Ferguson in Black and White 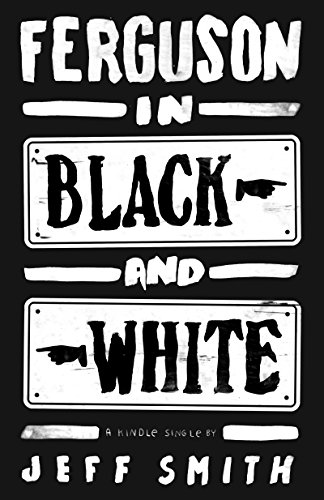 Ferguson in Black and White (Kindle Single)
Author Jeff Smith is an urban policy professor and former Missouri State Senator. Who better offer perspective and explore the roots of Ferguson's rage? He offers insights on how other cities can address racial and class inequality so that they might avoid the chaos on St. Louis streets. This author has the background and experience to provide readers with an honest and frank evaluation that will help all of us better understand the numerous variables in this Ferguson controversy.
Buy Now

Police Militarization and the Threat to Democracy

Distractions that May Dim the View about Racial Conflicts

Can YOU Debate Without Hate?

If you can discuss racism, Ferguson or the protest without hatred and name-calling, then your comments are welcome below. Hateful language will be deleted.