Salar de Uyuni is the world’s largest salt flat that covers more than 12,000 sq, Km. Heaped upon the lands of Salar de Uyuni are piles of salt deposits.

The salt flat is located in the Potosi and Oruro departments of southwest Bolivia, near the crest of the Andes. It is at a height of 3,656 meters, about 11,995 ft above the main sea level.

Salar de Uyuni is 25 times larger than the Bonneville Salt Flats in the United States. Salar de Uyuni in Bolivia is also the highest salt flat in the world at three thousand seven hundred meters above sea level.This salt flat is the remains of a prehistoric lake.

How did the salt flats of Salar de Uyuni form?

The land of Salar de Uyuni is completely surrounded by mountains, and there are no outlets for the water to drain. The water dries up leaving behind salt deposits on the surface of the lake.

The Salar de Uyuni salt flat was formed by the transformation of many lakes that were part of a giant prehistoric lake, "Lake Minchin" about 30,000 to 42,000 years ago.

These flats are covered by thick salt crusts. They serve as natural resources of salt. The center of Salar de Uyuni has many small islands located on top of dormant volcanoes that were submerged by Lake Minchin. These islands have coral like fossil structures covered by algae.

The Salar de Uyuni salt flat is so level that the surface is used to calibrate the altimeters on board satellites. Beneath the salt flat of Salar de Uyuni, there are about 9 million tonnes of lithium - that is more than a quarter of the world’s known resources according to the US Geological Survey.

The salt flat becomes the world’s largest mirror when covered with water. Pink Flamingos come here to breed during the wet season.

A hotel in the middle Salar de Uyuni, Bolivia

Situated on top of the Andean mountains, Hotel Playa Blanca is built out of salt bricks, held together with salt motar. The floors, roof, walls, tables and chairs in the hotel are made entirely of salt.

Many tourists visit Salar de Uyuni to see the magnificent salt flats and to enjoy the vast lands covered with brilliant white salt.

A tour of Salar de Uni

A trip to Salar de Uyuni

After reading this hub, will you consider making a trip to the salt flats? 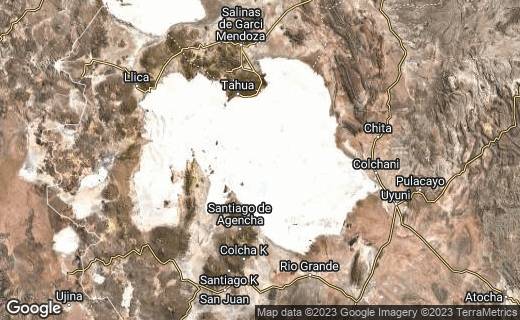