He has his degree in Metallurgical and Materials engineering. He is a certified Financial advisor by College of Insurance and Management.

What is sand casting? Sand casting is the process of producing castings by the use of molten metal, sand and molding box. Sand is of great importance to technological development and advancement. It plays important role in foundry technology. By far sand casting is the most versatile of various methods and techniques of forming metals which include forging, punching, rolling, stamping extrusion and many others (The Complete Handbook of Sand Casting by C. W Ammen). Sand casting had been the oldest method of casting even before the birth of Jesus Christ. The ancient Egyptians made use of this casting process before the advent of technology in the modern world of today. This is carried out in a place called the foundry workshop.

Before any object is casted or made through sand cast, there are some procedures that are considered. These are called safety precautions in the workshop. As there are processes adopted before automobiles are produced, so are there casting stages in the study of metallurgy.

These processes include pattern making and placing, melting of molten metal to be used, pouring, making of risers, runners, vents and so on.

There are weaknesses that are concerned with sand casting processes. These weaknesses are called defects in casting. In casing with the use of sand, some of these defects are caused by impurities, low fluidity and inclusion of few gases during casting in the foundry workshop.

Buy below book on this topic: 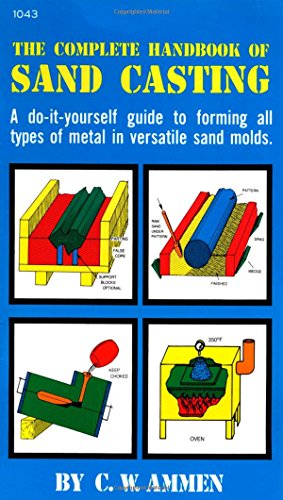 Sand casting displaying the mould and the already cast product

The casting of any object in foundry workshop starts with the pattern making process. The pattern can be made of woods, plastics or metals. In Nigeria, the most widely used pattern by students in Metallurgical Engineering department is those made from wood. The question is: whose function is it to make these patterns? Who makes pattern used in foundry workshops. The answer is: the pattern makers make patterns. It is when these patterns are made that casting will proceed. Remove pattern from casting and casting in engineering seizes to exist. In the other words, without pattern, there will be no casting process.

Sand which is used for casting is called the moulding sand. Appropriate quantity of water is used to mix the sand to avoid the sand from being waterlogged. In mixing the sand with water, the water is sprinkled on the dry moulding instead of pouring. When the water is poured, it can result to excess.

The pattern is placed in a moulding box. Note that the part of the pattern to be placed on the floor is the part that is flat. This is because the flat portion is more stable on the floor. A powder called parting powder is sprinkled for easy removal after moulding. The moulding box is filled with moulding sand. First, when the mould is filled to some extent, it is compacted with a casting tool called rammer. The compression is to avoid the mould from collapsing when it is raised up. After final ramming, the extra compressed moulding sand is scrapped out using scrapper. The lower part of the mould which is first made contains the drag.

Note that the runners are larger in size than the risers. What are the functions of risers in sand casting? In sand casting, the risers perform three principal functions:

The pattern used in the mould is removed before solidification process. This is easily removed because of the parting powder poured on the drag and the cope before formation of the mould. Addition of parting powder can also be called dusting which is applying of powder to mould surface such as graphite to the mould surface (How to Cast Small Metal and Runner Parts by William Cannon) The next step that follows after this is to leave the mould to dry. The formed impression by the pattern is called the mould cavity. This is what forms the final output called the casting.

The molten metal is formed by heating the scraps to the melting point. Many metal types can be used, but Aluminium scrap is what is used in this write-up. The scraps are added into crucible and heated to the temperature of about 660.3 degree Celsius. This is the melting point of Aluminium. In some cases, dross is formed on the top of the molten Aluminium.

Dross is the impurity found on the surface of molten metal. The dross is removed with a tool called skimmer.

weatherof the day. The cope is placed on the top of the drag. They are joined firmly with fire clay. The molten metal is poured through the runner. The question that can come into play in this stage is: how do you know that the mould is filled? An indication that the mould is filled is identified through the riser. Once the melt starts coming out from the riser, it is an indication that the mould cavity is filled. The change from molten metal to cool solid casting takes place in three main steps (Metal Casting: A Sand Casting Manual for the Small Foundry, Volume 2 by Steve Chastain). These three stages are cooling of the molten metal from pouring temperature to the solidification temperature, removal of heat of fusion, the third and the last is cooling of the solid metal (casting) to the room temperature.

The casting is removed after cooling. It is then machined to obtain the final and original casting. Flash is at times formed when pouring; this is removed through the process known as fettling. The flash is formed as a result of weak contact between the drag and the cope. Fettling can be conducted by clamping the casting on a vice and then remove the flash with saw.

What are the defects in sand castings?

Casting by sand or casting using green sand though have been in use for years have many limitations. In sand casting, there are many defects that are related to it. These defects are obstacles to the utility of sand casting in totality. Because of some of these errors, some other casting approaches have emerged in the recent time. These defects are but not limited to:

Shrinkage: This is formed as a result of irregular of the molten metal round the mould cavity. Shrinkage is noticed on solidification of the casting.

Gas porosity: This is also noticed after solidification of the casting. It results from trapping of gases during casting. It can also be caused by insufficient vents for emission of gases. It is seen in a situation where liquid metals hold large amount of dissolved gases. Gas porosity has resulted to producing castings with less reliability.

Pouring metal defects: This as the imply results from improper pouring of the melt. It can be resulted when the molten metal is not sufficient to fill the mould cavity. Another cause of it is when the liquid metal does not flow evenly. This results to leaving some parts of the mould cavity half-filled. Pouring can also be caused by weak ingate construction or creation.

How can the casting defect as a result of flash be corrected? The failure can be corrected by taking certain things into consideration. Care must be taken during pouring of metal into mould cavity to avoid shifting of the mould. Again, proper alignment must be made in positioning the mould and correct use of location-pins and fire-clay is to be taken into consideration.

“Things” have been written, proper explanations have been made and more insight has been given on sand casting in its processes. I hope the information on this chapter is well captured? Few defects associated with sand casting have been written on. In summary, Metallurgy as a department in engineering faculty cannot do without casting be it sand or with any other means.

1. The Complete Handbook of Sand Casting by C. W Ammen;

2. How to Cast Small Metal and Runner Parts by William Cannon;