Legends of the Chesapeake

Secluded Beach on the Chesapeake Bay

Over a time span of the last 200 years, there have been reports of a strange creature spotted in the midst of the Chesapeake Bay, the largest estuary in the United States of America covering more than 4,479 square miles. Said to be a dark, snakelike animal with flippers, Chessie is about 30 feet long and able to swim at a speed of up to 10 MPH. The strange creature is known to be playful and unfeared by those who live and work on the Bay.

Some believe Chessie to be a prehistoric creature. However, the Chesapeake Bay, as a very shallow and cold body of water, would not be a suitable habitat for a cold-blooded prehistoric animal. Such a creature could not possibly survive in these frigid waters.

Some believe the creature may be the very same Manatee that was captured and tagged here in 1994. After being returned to its home in Florida and released, the animal has swam back into the Chesapeake Bay every year since; and has swam as far north as Rhode Island before heading back south again. However, manatees do not swim while undulating from side to side like a snake as reported by Chessie’s viewers.

Other theories to explain the creature’s sightings have included a mutant eel, large river otters and South American anacondas which may have escaped from sailing ships during the 18th and 19th centuries.

The “sea monster’s” first recorded sighting, as documented by Matt Lake in “Weird Maryland,” was in 1943 in the water near Baltimore. Spotted by two fishermen, Francis Klarrman and Edward J. Ward, from about 75 yards away, they described the "sea monster" as being “black and the part of it that was out of the water seemed about 12 feet long. It has a head about as big as a football and shaped somewhat like a horse’s head. It turned its head around several times – almost all the way around.”

On May 21st, 1982, Chessie was captured on video by Maryland couple, Robert and Karen Frew. Viewing the Frew’s images, scientists found them too blurry to identify the creature exactly; but did confirm it to be a very large animal. Through the blur, Chessie appears to be a brownish creature moving through the water like a snake.

The creature’s most recent recorded sighting was in 1997, when Chessie was spotted very close to the shore of Fort Smallwood State Park, near Marbury, Maryland.

While there are alleged photographs of the Chesapeake Bay’s Chessie, there is no absolute proof of this creature’s existence.

The Sun Shines Brightly on the Chesapeake

The Southern End of the Chesapeake

Where to Look for Chessie: 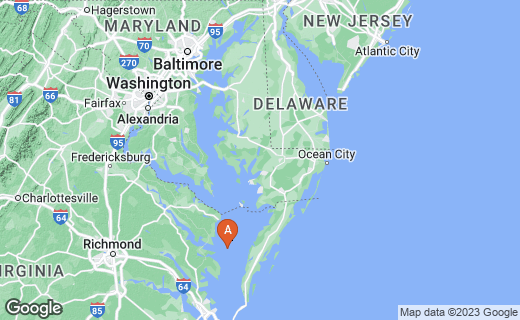