The Secular History of the Bible

An interest in God, meta-physics, and religion dominated Tessa's life for half a century. A decade ago she walked away to become an atheist.

Some Facts About the Bible

When publishers bring out new editions of the bible, these are copyrighted, so other publishers cannot sell them. This enables them to make a lot of money out of selling bibles.

Many Different Translations and Editions of the Bible.

When many different versions of the bible have differences in their text, then the question becomes "Which, if any of them, are authentic?"

The Codex Sinaiticus omits many difference verses from the New Testament. As it is the earliest of all versions, this would indicate that later versions added verses. An obvious conclusion would be that the bible was clearly not written by God, as God would have gotten it right the first time. Another deduction would be that parts were added in to ensure that people believed a certain ideology.

In addition, as a result of the enormous amounts of money exchanged for anything that can prove the authenticity of Jesus, those who discover early fragments tend to lie about where they were discovered, and they manufacture stories about their discovery.

Brent Nongbri, an authority on early Christian manuscripts has discovered that many of the stories attached to the finding of these fragments are erroneoous, and therefore the earliest fragements are from the fourth century and not the second century.

In other words, there were no first hand witnesses, and by the time 300 years have passed, there is a lot of room for fabrication, exaggeration, and just plain spin!

Is the Bible Proof of the Existence of God/Jesus?

The Earliest Bible Used by Christians - The Septuagint

The iSeptuagnt is the first Greek translation of the old testament. It was initially translated in the third century BC. It was in use at the time of the supposed existence of Jesus Christ. It comprised the first five books of the bible - Genesis, Exodus, Leviticus, Deuteronomy, and Numbers.

The Greek translation of the Septuagint came into being when Ptolemy II asked 72 scholars to translate the Torah from Hebrew to Greek in order to be included in the library at Alexandria.

In 100 AD, these Jewish scriptures were rearranged to exclude some scripture and include others. It was at this point that Rabbis decided to omit the scriptures that had been written between 170 BC and 70 AD. These were the scriptures that were written in Greek and not in Aramaic. There were arguments that the Greek translation did not match the Hebrew meaning.

Christians continued to use the version of the Old Testament that included these books until the middle of the 19thcentury when the Protestant Church finally eliminated them.

There are no surviving copies - only fragments.

It was discovered at Saint Catherine's monastry in Sinai - rather it was partially discovered. Other parts of it have been discovered in other parts of the world. Most of it is currently held in the British Library in London.

What is interesting about this very early edition of the New Testament is the number of verses that are omitted in it. This would indicate that these verses were later added.

The Early Years When the New Testament was Written.

The gospels were written about forty years after Paul wrote his epistles (letters).

As Paul's letters circulated through the church, other people began to write letters detailing the exploits of Christ, and still others started writing about the exploits of Jesus Christ.

This was about 70 years after the death of Christ.

There is no evidence that anything these people wrote is historically accurate. In fact, the gospels were initially written anonymously and later given names by leaders within the church so that there was added authenticity to them.

The original Greek Orthodox Bible contains all the above plus 1st and 2nd Esdras, the Prayer of Manasseh, Psalm 151, and 3rd Maccabees. The above additional books in the Catholic bible plus these extra books are called the Apocrypha.

The bible used by the Greek Orthodox church uses the Septugint, the Masoretic texts (700 AD to 1000 AD), and the Dead Sea Scrolls.

An English one was translated in the early 20th century.

This was a group of loose texts that were were written in an older version of Latin. Because they were written locally by various church officials, there are many grammatical errors, and other languages sneak in. Many of these texts contradicted each other as they were written to 'teach' local communities the 'lessons' that their leaders thought those communities needed to be taught.

It is a collection of manuscripts - not a bible.

The Vulgate was commissioned by Pope Damacus in 382 AD and written by Jerome. It was a Latin translation of the existing texts of the time. Jerome decided to add books from the old testament. Another scholar was responsible for the new testament translation, but there is no record of who this was. Jerome did not believe that Paul wrote the epistles attributed to him, and it is this argument that indicates he was not responsible for the collection of new testament writings.

This version of the bilbe was in use for more than a 1000 years before it was made the official Latin bible of the Catholic Church. This was announced at the Council of Trent (1545–1563).

The Gutenberg bible was one of the first bibles printed when print was invented. It was printed in 1450 and was a copy of the Vulgate It was printed in Mainz in Germany by Johann Gutenberg. There are currently forty nine copies in exiistence.

John Wycliff arranged for the translation of the Latin Vulgate into English. As an outcome of this, there was disagreement with the Catholic church as to what certain verses meant.

This was the beginning of the disgruntlement of the Catholic church which eventually led to the reformation.

The work was done by several scholars of the time, and it included the Apocrypha.

William Tyndale translated all of the new testament and about half of the old testament. It was Miles Coverdale who used his texts to produce the Tyndale bible. Tyndale's wish to translate the bible into English was seen as a heretical and he did not have permission to do so. He was subsequently put to death in 1536.

The Sinners' Bible was published in 1631. It said "Thy shalt commit adultery."

This was the first English translation of the bible. It has much of the text of the Tyndale bible but had uncomfortable sections that the clergy did not agree with removed. It is also known as the Cromwell Bible as he directed its publication.

This was the first mass-production bible made available to people and was taken to America on the Mayflower. It was produced with a study guide to understand the bible. It also comprised illustrations - including maps.

The Geneva bible was translated in Switzerland into English by protestants fleeing Queen Mary's persecution of protestants.

In 1534, the Church of England split from the Catholic Church due to the Reformation. Many of the ideas of the Catholic church were challenged by various leaders of the reformation.

Some of these were:

The King James Bible was published in 1611 in England, the result of a rift between the Catholic Church and the Church of England. King James gave strict instructions that the bible was to conform to the Church of England’s doctrine. The King James bible deviated from Catholic doctrine, and as there were no other sources for the Christian religion, the way it deviated was based simply on the interpretation and belief systems of church leaders in that time.

The Greek bible is the closest translation of early Christian texts. 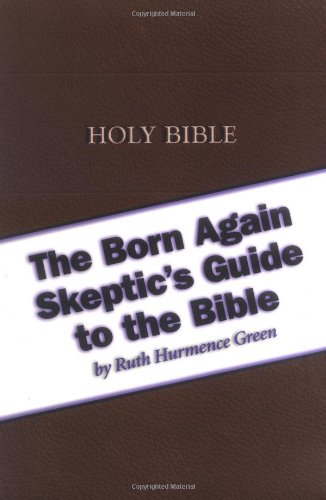 The Born Again Skeptic's Guide To The Bible
The bible contradicts itself repeatedly. This is the book to read to discover some of those contradictions. Been there. Done that. I fully endorse this book and think everybody should read it.
Buy Now

Current Version of the Bible Available

There are many different versions of the bible available.

Catholic versions of the bible include the apocrapha. The apographa comprises an additional fourteen books which were written between the time the old testament ended and the new testament started

The Jehovah Witness bible would be The New World Translation.

Here's a list of the different bibles currently on sale.

And so it goes. These are just a few of the different versions currently on sale. Naturally, just as Apple, Microsoft, Adobe, fashion houses, and car manufacturers are constantly producing new versions of their goods, so it seems are publishers!

As the bible is the world's bestselling book by far, obviously it is highly profitable to keep producing new versions.

Do you believe the bible is?

Should Everybody Read the Bible?

I don't really have an opinion on that. I have certainly read it from start to finish many, many times. I have also read the Koran, the Torah, the Vida, and numerous other 'holy' scriptures. In addition, I've read a sceptic's bible or two.

To be educated isn't about having a qualification from a university. It is about being well informed about many different things. Religion is a fundamental part of human culture. As such, I believe it's important to know what people are referring to when they mention certain things.

It's the same reason I advocate that people read news sources from many different countries.

We cannot make informed decisions about anything unless we have specialist knowledge of those things.

For my part, I read the bible so many times, and I read through so much of its secular history that I remain convinced it is nothing more than the work of primitive men, that it has been changed many times, and that it cannot be regarded as a historical document of any events.