Reunion Island in the Indian Ocean is a French colony.

The people there speak French, and the vast majority of shark attacks there are on French people.

Being a part of France, people from there spend their vacations on this beautiful sunny location, with its palm trees, white sands and warm crystal clear waters.

While located far from Europe, Reunion Island is today a throwback from old colonial times.

Like Gibraltar is part of the UK while distant from its fatherland, so Reunion Island is a captured territory.

Yet now and again the terrifying reality of warm water sharks attacking people from cooler climes raises it ugly head.

Every shark expert from across the globe will describe those attacks as 'accidental'.

Sharks eat seals or porpoises, or other ocean-going creatures.

Human beings are not on the menu; we are much too boney and not salty enough for them.

That does not seem to stop the annual slaughter of humans while enjoying sea sports, or snorkeling to learn about sea life.

Let's have a look at the record of shark attacks on humans at Reunion Island. 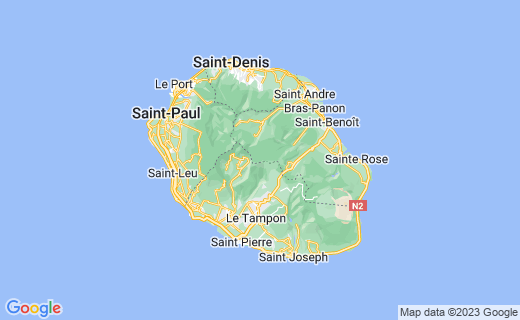 A 15 year old girl was reportedly 'bitten in half' when attacked by a shark while snorkeling just 5 yards off a beach at Saint-Paul in the north west of the idyllic island of Reunion in the Indian Ocean.

This is the time of day when sharks should be sleeping. They normally hunt for food between dusk and dawn.

Incredibly sadly, the girl should not have been swimming there at all. The beach is closed to swimmers due to the high numbers of sharks that are known the frequent the area.

The girl, known only as "Sarah" was spending the summer vacations on the island with her father who runs the yacht club in Saint Paul.

She normally lives with her mother in Paris, France. 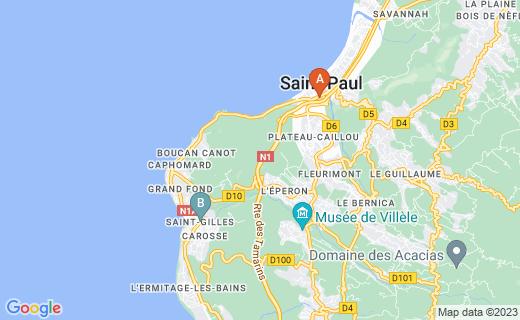 36 year old Stéphane Berhamel was spending his honeymoon on the French Island of Reunion when he was fatally wounded by a bull shark.

He had been surfing off Brisants beach in Saint-Gilles when a bull shark was witnessed attacking him twice.

As the water filled with blood, fellow surfers went to his aid and brought the badly injured man ashore.

The injuries to his arm and leg were too great, and he had already entered respiratory shock due to the tremendous loss of blood, and he died from his injuries.

He had been surfing in an area that was deemed to be particularly dangerous.

Fellow surfers had warned him to stay away from it, to no avail.

The tragedy was witnessed by his wife who was on the beach at the time.

He leaves behind an 18 month old son in his native France. 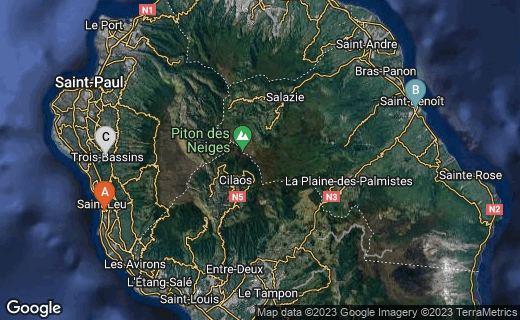 Gerard Itema, board bitten by shark

Which would you rather meet while surfing?

5th of August 2012, man badly injured by shark at Reunion

39 year old Fabien Bujon was surfing off Saint-Leu in Reunion Island when he was attacked by a bull shark.

He was in shallow water at a coral reef, 50 metres from the beach.

In typical fashion of bull sharks, it charged him again and again. He lost both his right hand and foot in the attack.

Bravely he fought the shark off.

It was 3 metres in length, weighing 250 lbs and for a time it was man against beast. Fabien punched the shark hard with his right fist while using his left hand to pull at the gills of the shark, hoping to make it let go off his leg.

After a time he realised his right hand was missing. The shark had bitten it off. He felt no pain and kept fighting, until the shark turned and left and he was able to ride a channel stream of water that took him back to shore.

All the while, he struggling to stop himself from fainting as he realised how severe his injuries were, but he felt no pain.

His wife and two children were in the nearby town at the time.

One of the saddest things about this attack is that Fabian loves the sea and the creatures in it. He paints pictures of sea animals, and sharks are his favorite.

23rd of July, 2012, another fatal shark attack at Reunion

22 year old Alexandre Rassica was surfing off Trois-Bassins in Reunion Island when he was attacked by a shark.

His right leg was completely bitten off, and Alexandre was quickly assisted to the shore by fellow surfers.

Sadly, he suffered a massive blood loss and died at the scene, despite paramedicas working on him for more than an hour.

Alexandre belonged to the island, and had been surfing all his life.

A shark bit his board. He was injured. 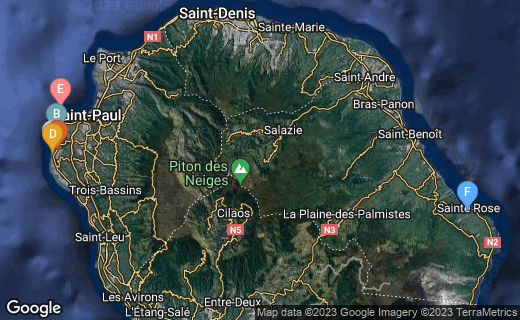 42 year old Jean-Paul Delaunay had his left foot bitten by a shark while spear-fishing off Sainte-Rose, Bois Blanc, Reunion Island.

The attack happened in the morning, which is always a dangerous time to be around sharks.

His injuries were severe enough to require hospital attention.

51 year old Jean-Paul Castellani was canoeing at Cap La Houssaye when his canoe was attacked by a 2 to 2.5 metre shark.

The shark bit his canoe, but did not injure him.

38 year old Mathieu Schiller was body-boarding off Boucan-Canot, Saint-Giles, Reunion Island when he was fatally attacked by a shark.

Mathieu was one of a group of men surfing while the Red Flag was up to stay out of the water.

He was France's champion surfer in 1993, 1994 and 1995. In addition, he was master rescue swimmer and sports instructor.

There are reports of a male kayaker being attacked by a shark at Brisants on Reunion Island.

No details were reported about either the man or the type of shark involved, but it is believed to have bitten the stern of the kayak, causing no injury.

16 year old Arnaud Dussell was surfing off Roches Noires, Saint-Giles, when he was attacked by a shark.

A surfer for 10 years, Arnaud knew conditions were not ideal. The Red Flags were flying and the water was murky.

50 metres from the shore, Arnaud saw the huge gray shape pass underneath his board. He quickly took his foot out of the water, as the shark attacked.

His board got the worst of it. Arnaud suffered from only a scratch on his foot.

He was back surfing in the same area just 90 minutes later!

31 year old Eddy Aubert was boogie-boarding off Boucan-Canot, when he was attacked by a shark, or perhaps a group of sharks.

He suffered severe injuries in the attack. The mutilated areas were around his leg and flank and he would have quickly bled to death.

The Red Flag was flying to deter swimmers.

The sea was murky and the attack happened shortly before night-fall, always a dangerous time because sharks like to hunt for food at this time.

32 year old Eric Dargent lost his left leg from the knee down when he was attacked by a shark while surfing off Trois-Roches, Saint-Gilles, Reunion Island.

He had just finished a two-hour surf session and was preparing to return to the beach to join his wife and family who were eating ice-cream.

The waters were crystal clear, the sands white. He was just sitting on his board enjoying the moment when from the deep came a monster shark. The first he knew of its presence was when it wrapped its teeth around his leg.

The shock and horror of it all happened in an instant, as the shark retreated with his leg severed clean off from just below his knee.

Other surfers came to his assistance and a tourniquet was applied. This probably saved his life as he would have otherwise bled to death.

This was the first shark attack ever in Saint-Gilles.

27th March, 2010. Oliver Schorebreak, 37, had his board bitten by a 1.5m shark at Bittern, Saint-Benoit, Reunion Island. He suffered no injury.

4th July, 2007. Vincent Boujou, 17, was attacked by a 2m shark while body-boarding at Boucan Canot, Reunion. He suffered minor injuries to his thigh and knee.

27th August, 2006. Gérald Préau, 27, suffered laceratiions to his right calve and heel while body-boarding off Boucan-Canot.

Early August, 2006. A man had this thigh bitten by a 1.5m shark, while spearfishing at Le Port, Reunion Island.

6th October, 2004. Vincent Motais, age 15, had his leg surgically amputated after he was severely bitten by a 2.5m tiger or bull shark. He had been body boarding off P' tit Paris, Saint Pierre, Reunion.

8th of September, 2000. Karim Mann, 27, had his left arm bitten by a 3m tiger shark while surfing off Pic du Diable, Saint-Pierre.

*FATAL* 11th April, 1999. Gary Oudin, 52, was fatally wounded by three bull sharks off Etang Salé-les-Bains. He had been swept into the sea by a large wave, and was swimming back to the shore when he was attacked.

1st October, 1998. An unnamed person was attacked by a shark while diving off Saint Benoît. He is noted as having survived.

*FATAL* 25th January, 1998. Philippe Blu was fatally injured by a shark while bathing off Grand'Anse, Reunion.

*FATAL* 1998. A man died after being attacked by a shark while diving at Beaufonds.

20th February, 1997. Laurent Lebon had his hand injured by a shark in the waters off L'Etang-Sale, Reunion.

*FATAL* 16th September, 1995. Jerome Pruneaux was killed by a shark while body-boarding off Saint-Denis.

*FATAL* 15th April 1994. Someone was killed by a 3m bull shark off Lieu-dit Cayenne, Saint-Joseph.

*FATAL* 28th June, 1992. Theirry Mercredi, 16, was attacked and killed by either a bull or a lemon shark, while surfing off Cap de la Marianne, Saint-Paul.

June, 1992. A diver was attacked by a mako shark at Saint-Paul. He survived.

*FATAL* 22 May, 1992. Emmanuel Nativel was surfing off Lieu-dit Cayenne, Saint-Joseph, when he was attacked and killed by a 4m tiger shark.

*FATAL* 19th July, 1989. Bruno Giraud was fatally wounded by a shark while surfing off Sainte-Suzanne.

14th March, 1988. Frédéric Mousseau suffered lacerations to his hand when attacked by a shark while surfing off Pic du Diable, Saint-Pierre.

24th November, 1980. Jean-Michel Pothin, 22, survived after being bitten twice by a 1.8m great white shark while spearfishing off Grand'Anse, Reunion.

Do you still want to go into the water after reading this hub?

*FATAL* 1st December, 1972. A spearfisherman was fatally wounded by a shark off Basse Vallée, Saint Philippe.

*FATAL* 1913. A swimmer was taken by a shark off Barachois, Saint-Denis.

*FATAL* summer of 1912. Two attacks at Barachoise, Saint-Denis. One fatal, the other unknown.