Nearly a month after the excitement of Norfolk, birding for me had become localized as I prioritized my local patches over chasing rarities. The previous day I had enjoyed counting Little Egrets as they came into roost at a small pool barely 4 miles from my house known as Priory Mill. I ended up with a total of 17, the highest number I had seen anywhere in the West Midlands county. I had very much enjoyed 'doing' the roost and resolved to give it another go the next day. However, what to do in the morning? There was nothing on the birding radar that compelled me to jump in the car and set off on a twitch, so I decided to make the short hop into Warwickshire and explore the area around Kenilworth Castle.

Kenilworth is a place that I'm very familiar with, the iconic ruins of the once glorious Castle had played host to many a childhood wooden sword fight between myself and my brother- I always won of course. I'd walked around the vast park opposite the Castle known as Abbey Fields countless times, and had visited pubs such as The Queen and Castle, The Green Man and The Bear and Ragged Staff many times. In fact, Kenilworth was the place that myself and Paula had our first official date and every time I walk along Finham Brook I can't help but smile at the memories that it conjured up.

We, as in myself, my mother and my Jack Russell Marley arrived in Kenilworth shortly after half ten in the morning after the relatively easy drive along the A45 towards Coventry before turning off at Stonebridge Island and heading along the A435 which takes you into Kenilworth and beyond to the next town, Royal Leamington Spa. Normally, I like to park on Abbey Hill, as its free and the fact that its adjacent to Abbey Fields Park makes it the perfect place to start a walk. However, you have to be up with the lark to grab a spot on a Sunday and our late arrival meant that there were no spaces available. Instead we parked in the main car park, and we were lucky to find a spot in there I can tell you. I remember trudging up to the ticket machine rummaging for change only to discover that parking is free on a Sunday. Result!

Where is Abbey Fields? 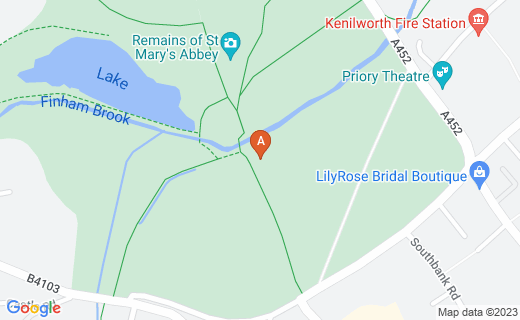 Abbey Fields is essentially Kenilworth's local park and is thus a haven for families and dog walkers. They even have an indoor swimming pool there for anyone who fancies a dip. However, the real focal point of the park are two buildings, firstly there is the Church of St Nicholas, a Gothic building made from local sandstone that dates back to 1210 AD and the now ruined Abbey of St. Mary's. It served as a priory for Augustinian canons from circa 1124 right up until the Dissolution of the Monasteries during the reign of Henry VIII, when it was dismantled. The only structures that remained unscathed were the gatehouse and the barn.

For me though, the real pull of Abbey Fields is the natural lake that provides home for Wildfowl including the usual Mallards, Mute Swans and Canada Geese. There are usually good numbers of Black-headed Gulls and there is normally a resident Grey Heron. At various times I've also seen the odd Eurasian Teal and Northern Shoveler. In February 2017 I was lucky enough to see not one but two Whooper Swans that decided to call the Lake home for most of the winter, and indeed one of the two birds would return a year later. During my February 2017 visit I remember having a brief conversation with another birder who recalled seeing a Bonaparte's Gull there back in 1990. Intrigued by this, I had a look at an old West Midlands Bird Club report, which revealed that a Bonaparte's Gull did indeed appear at Abbey Fields on the 10th March and stayed for nearly 3 weeks. The same bird also put in appearances at a large reservoir called Draycote Water, also in Warwickshire at around the same time. Fascinating stuff, but on this particular visit, despite scanning the Gulls several times all I could see was the usual Black-headed Gulls.

After leaving Abbey Fields, we nipped over Castle Road, passed through a small patch of woodland, walked under the main bridge that acts as the main access point for Kenilworth Castle and finally up a gentle slope up to a gate that leads into the fields that surround the Castle. From here, a path enables you to complete a roughly 2 mile loop of the Castle. Entering the field, I stood, as I always do for a moment to admire what was once one of the grandest Castles in all of Britain. It was once the scene of a lavish reception laid on by the Earl of Leicester for the then Queen of England, Elizabeth I. It had survived the longest siege in English military history in 1266, only for it to be almost totally destroyed by Parliamentary forces in the aftermath of the English Civil War in 1649.

However, my attention was soon diverted away from pondering over English history to a loud croaking nasal call from high up in the grove of Beech trees that separate the Castle car park from the fields. I recognized it instantly as the contact call of a Brambling, a small brightly colored finch that moves across from Scandinavia into the UK to escape the bitter Arctic winters. I heard it three or four times, a wheezy call 'dzwee' 'dzwee'. I craned my neck skywards and frantically scanned the tree canopy for a flash of orange. The problem was that the leaves of the Beech trees had already turned Autumnal brown, meaning that a flash of orange wouldn't have stood out as much as it would have a couple of months before. I heard the call a couple more times, but wasn't able to get a visual. I was able to establish though, that there were at least two birds somewhere up in the boughs. Those same boughs were well and truly alive with small passerines, I picked out many calls including birds such as Eurasian Blue Tit, Coal Tit, Goldcrest, Great Tit, European Goldfinch, Long-tailed Tit and Common Chaffinch I didn't hear the Bramblings call again though, so safely presumed that they had moved on. The Bramblings themselves could have easily been the main highlight of any morning walk, but little did I know that the main highlight was still to come.

The Pleasance And The Owl

About halfway around the Kenilworth Castle loop, we entered a field characterized by what looked to me like a series of lumps and bumps in the ground. However, these lumps and bumps form the clear remains of what was once a human dwelling. The so called 'Pleasance in the Marsh' was once a manor house situated at the edge of a long vanished Mere, which in turn formed part of the defense of Kenilworth Castle. It was constructed in around 1414 AD and served as the summer residence of Henry V. By the time of Henry VIII though, the Pleasance had been abandoned and fell into ruin. Today the name lives on in the form of the nearby farm a few hundred yards to the North.

As interesting as the history is, the encounter that I would have in the midst of the Medieval ruins would leave me virtually speechless. Both my Mom and I spotted the bird immediately. A medium sized owl with a mottled brown plumage and piercing yellow eyes. It circled the field several times revealing its rather pale under-parts, leaving no doubt in my mind that what I was looking at was a Short-eared Owl. The only other possibility was a Long-eared Owl but their plumage is more of a buff brown. Furthermore their ear tufts are obviously longer and they are almost exclusively nocturnal whereas the Short-eared Owl regularly hunts during the day. I'd heard reports of Short-eared Owls in and around The Pleasance before, but this was wholly unexpected.

We both watched transfixed as the bird quartered the field before the imminent arrival of several very noisy and clearly alarmed corvids, namely Rooks and Western Jackdaws. Recognizing the bird as a potential threat, they immediately set about pursuing the Owl across and around the field, exhibiting behaviour commonly known as mobbing. I've seen corvids mob birds such as Common Buzzards many times and usually their efforts are rather half hearted- a quick chase before giving up once the Raptor has left their airspace. However, with the Short-eared Owl they actively chased it in an unrelenting fashion. In fact, the mixed party of Rooks and Jackdaws succeeded in forcing the beleaguered bird to the ground, and both my Mom became slightly concerned over the welfare of the bird, especially when it failed to rise. After waiting for a few anxious minutes, the Owl rose again, and in no time at all the whole sequence of events I’ve just relayed repeated itself. It was almost as if the entire collective corvid community converged as one upon the Owl. This time the already exhausted bird found rather better shelter in the form of a Hawthorn tree, and in a moment the cacophony of noise subsided. A quick check through my binoculars reassured me that the Short-eared Owl was safe, as it dozed peacefully within the confines of the trees. With that, Mom and I moved on to complete the walk. As I trudged up the wooded path back to the Castle, I added the Short-eared Owl to my year list and reflected upon the satisfaction of perhaps the best views of a Short-eared Owl that I will ever have.

Where Is The Pleasance? 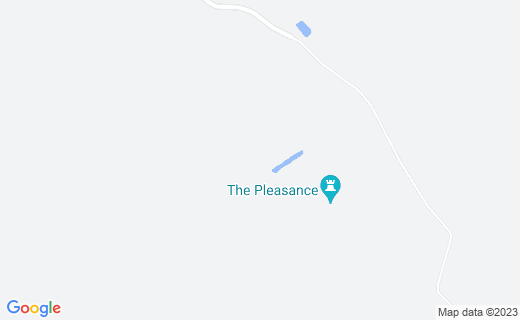 The area in which I saw the Short-eared Owl