The Riches of the Spanish Main.

The Spoils of the Spanish Empire.

The Spanish Main consisted of many colonial territories around the Gulf of Mexico and Caribbean. These Spanish colonial possessions included Trinidad, Cuba, parts of the United States, Venezuela, Columbia and many other modern day countries which were situated on the southern coastline of the great Atlantic ocean. The natural resources imported from these distant settlements created great wealth for the Hapsburg and Bourbon dynasties throughout Spain's hold on the this area. The Spanish Empire had the monopoly on the prime trading routes and native safe harbours until Great Britain brought its own immense sea power to complete for the share of the spoils at the start of the 17th century.

Spain's ruling classes spent a lot of the riches from the Spanish Main on fuelling successive European conflicts against a host of foreign foes. Spain was very aware of the raw materials and riches that both America's possessed. The expeditions of Hernan Cortes marched into the major settlements of the Aztecs and the Inca. Once Cortes arrived, he saw the large amounts of precious metals that the native people of these lands possessed. As soon as Spain became aware of the vast reserves of gold and silver, they wanted it all for themselves. When fellow colonial powers heard news of the potential rewards available, the Spanish Main became an area of the world which European rulers wished to control and exploit.

Illustration of an Inca Temple.

These conveys were initially set up to protect Spain's colonial riches from British, French and Dutch Privateers.They also served as a deterrent against independent attacks by those who sailed under the pirate's banner. The convoys were a mixture of military ships and commercial vessels for transport. The fleet was used for transporting a wide variety of items between the Old World and the New World. These transports included sending agricultural goods and sometimes even lumber to the Spanish colonies in the New World. Even manufactured goods and various metal resources were sent to the Spanish Main, this aided the growth of these foreign settlements and allowed them to become a bit more self-sufficient. The most important import to the Spanish Main was the raft of colonists who sought their own fortune and future in these distant lands.

The exports from the Spanish Main held more material value. These were the prized convoys that carried the expensive luxury goods back to the great ports of the Spanish Empire. They famously imported silver and gold. But the Spanish Main also sent equally valuable cargo such as gemstones, pearls, spices, sugar, tobacco leaf, and exotic silks.

Cortes Brought Much Wealth to the People of Spain. 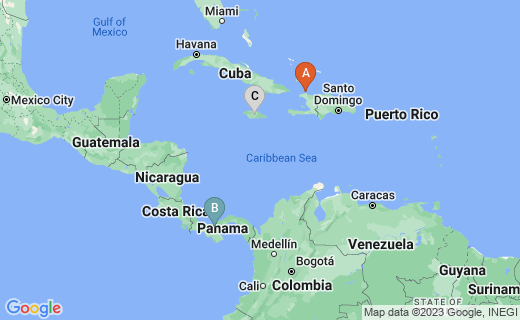 Panama had a wealth of Spanish colonies including Portobelo.

The English run township of Port Royal was rife with Pirates and Privateers.

Piracy flourished in many of the Caribbean Islands because of the existence of relatively lawless British ports such as Port Royal(Jamaica) and within the French port at Tortuga(Haiti). The French encouraged a lawlessness in Tortuga as it destabilized Spain's economic monopoly in the area. The fear of piracy in the Spanish Main made the settlements less productive and decreased the morale of the settlers to a point where the French could potentially gain a foothold.

The Spanish rulers of the New World had many problems to contend with. The loss of the native population due to disease forced Spain to increasingly rely on African slave labor to help run its Spanish colonies. The Slave Trade offered new sources of profit for British, Dutch and French traders who wanted to get a slice of the Spanish colonial wealth. The new lands in the Caribbean also made it an inviting place for Britain, France and the Netherlands to set up colonies of their own. This lead men of vision to set up plantations for tobacco and sugar as cash crops that could make men very rich. This also created a new colonial middle class from those who could succeed in spite of foreign competition and the tropical heat. The legacy of the global powers is still felt even now in the modern age.

Spanish Vessels Carried the Riches of the New World.

Do you believe that Piracy along the Spanish Main, has been glorified?

Other Articles by Author