Tales of the Fourth Dimension: "And He Built a Crooked House" by Robert. A. Heinlein

Can You Visit Another Time and Place?

Do you enjoy the experimental opportunities of mathematics, physics, and science fiction? Time travel and tesseracts have made their way well into the genre, taking over movies like "Interstellar." If NASA researchers in Cleveland are successful, then we will one day travel through time, but back in the 1930s, there were other possibilities...

By the end of calendar year 2013, China had landed its first lunar rover on the Moon. Google's LunarX Prize competitors had several rover entries ready ahead of schedule for launch, but none went up becuase of lack of funding.

The United States ended its lunar exploration after Apollo 17, although an entertaining and realistic film called "Apollo 18" raked up a conspiracy theory about an ongoing contest between America and the USSR/Russia for lunar domination.

An explosion on the moon in the early 2010s, termed a "clean up project", injected conspiracy theories with more material. It gave support to Apollo 7 astronauts' voice recordings about a large structure on the Moon. If such a building existed, the explosion demolished it.

China is on the Moon, perhaps to map out mining operations, such work suggested as viable by author and ex-NASA engineer Homer Hickam in the book Return to the Moon. Many American companies developed asteroid and Moon-mining technologies in the 2010s.

With the American Commercial Crew's Mission to Mars taking form faster aerospace ships are required and time travel (breaking the speed of light) is taken more seriously by NASA. It is, in fact, studied at the John Glenn Center in Cleveland, Ohio.

NASA installations in Cleveland, Ohio have been researching and experimenting in the following fields:

The state was also fortunate to have former astronaut John Glenn, into his mid-90s, instructing college students from his own building on the main campus of The Ohio State University in Columbus.

With its own Space Corridor taking up the entire Southwest Quadrant of the state from Cincinnati to Columbus, Ohio is knee deep in the future of American space-time travel. Over 1,200 aerospace companies are successfully operating in the state.

Once, we had only science fiction stories about these topics, but those writings are finding reality.

A tesseract in a crooked house from the 1930s may be one solution to the time travel mystery.

And He Built a Crooked House

NASA built a lot of "crooked houses" that crashed and failed before it successfully sent mice, monkeys, and astronauts into outer space, around the Earth, and to the Moon. In the 2010s, SpaceX is experiencing the same adventures of successes and crashes.

"Walt Disney Presents" on Sunday night TV broadcast the history of the space program in the 1950s and 1960s. However, writers had been creating stories about all that for decades and science fiction conventions discussed aerospace aspirations as early as the 1930s. Everybody wanted to travel through time and space!

A particular story I enjoy is a tale of the fourth dimension. It takes its title from ideas in a Mother Goose rhyme:

And they all lived together in a little crooked house.

The crooked house in the sci-fi story is a folded tesseract that, when unfolded, leads to other dimensions in space-time. Step into the house and you never know where - or when - you are going to visit.

In the 1941 short story that first appeared in "Astounding Science Fiction", the address of a magic four-dimensional house is a real one near that of author Robert A. Heinlein's own house when he wrote the story. He chose a real address, but how many addresses does a real four-dimensional house need? That might depend upon how many points in space-time it can reach.

Address of the Crooked House 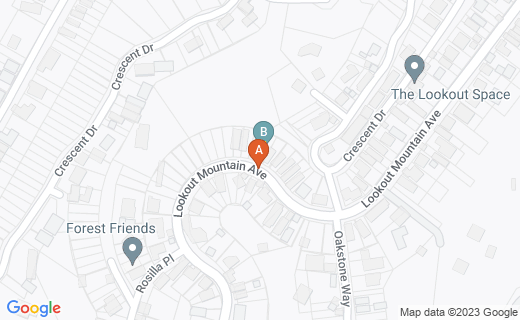 The Ambitious Architect Plays With Blocks

In the Heinlein story, an ambitious architect becomes drunk with a friend and begins to complain about the state of architecture in 1940s America -- It is too conservative. It is too confining. It is boring.

Frank Lloyd Wright felt exactly the same way about American architecture, so he created his own styles, like the prairie style. The drunken architect of the story went a few steps farther.

In the plot the sci-fi architect, Quintus Teal, decides to save real estate space with houses constructed into tesseracts. More specifically, these would be the unfolded tesseract style of eight cubes. He persuades his drinking partner to become more drunk and then persuades the man to sign a contract for a tesseract house, a real portal to adventure.

Collapse of a Cube

After the house is constructed, an earthquake shakes it in the middle of the night. Teal, his friend, and the friend's wife go to the construction site to inspect the new house and find only a single cube (one room) instead of eight cubes together (eight rooms). They jump to the conclusion that someone stole the other eight rooms! How, they cannot say.

In reality, the earthquake collapsed the 8-cubed unfolded tesseract into its folded state.

The trio enter the single room and find a total of eight full-sized rooms there. They are confused. Moreover, they discover that every door and window leads to a different place on Earth. The people are befuddled.

Another earthquake causes three startled people to land in an isolated desert somewhere. They are lost.

Back at the site of the tesseract house, the lot is now empty. The tesseract has entered another area of space-time altogether. Passersby are suspicious.

If NASA or the Chinese successfully find the mechanism for surpassing the speed of light, will we be able to use that mechanism in a practical manner? Or will we become as lost as the trio in the story?

Once past the speed of light, would a person be able to return to the same mark in space-time from which he had departed? We do not know.

NASA and the Commercial Crew intend to pursue the fourth dimension until they have finally learned whether or not Warp Speed (faster-than-light) is possible to attain. Ohio may be the first to know!