Mission in the Sun Altar

Doorway in Mission in the Sun

There's one thing I know first hand about Arizona artist De Grazia's profific volume of Southwestern art and that is, people either love his distinctive style or they hate it. De Grazia always called his style "Desert Art" because so many of his subjects reflected the Hispanic and Native American cultures.

Ettore "Ted" De Grazia was the son of an Italian mining family. He was born in Morenci, Arizona in 1909. Because the price of copper is always in flux, the family returned to Italy during De Grazia's childhood when his father needed employment. Besides loving to draw, he also possessed a talent for music and loved playing the trumpet. De Grazia returned to Tucson Arizona to finish high school. He married, had three children and he moved to Bisbee, Arizona where he began producing and showing his art. By chance, his early art appeared in a 1941 issue of Arizona Highways. After a divorce, De Grazia became interested in the art of Mexican mural artists Diego Rivera and Jose Clemente Orozco, and he did an internship with Rivera, which led to a showing of De Grazia's work which in turn led to a showing of his works at the Palacio de Bellas Artes.

After returning to Tucson, De Grazia graduated from the University of Arizona and opened his first art studio in 1944 in an adobe building near the corner of Prince Road and Campbell Ave. The small studio was constructed and decorated with objects that De Grazia had found in the desert. Before his fame, it was known that De Grazia painted kitchen and other tiles for homes in Tucson. In 1953, De Grazia's art was featured in an issue of National Geographic, but his big break came in 1960, when he was chosen to be the artist for the UNICEF holiday card. The painting that De Grazia chose for the card was Los Ninos or The Children which showed multicultural children dancing in a circle.

De Grazia married for a second time and was able to purchase ten acres of prime land in the Catalina Mountain foothills on the north central side of Tucson. Today the area is so built up with upscale homes and condos, but at the time De Grazia bought the property, the area was relatively unspoiled and dotted with saguaros and other varieties of Sonoran Desert trees and cacti. He called his land a place of reflection and peace. Before building his Gallery in the Sun on the property near the corner of Swan and Skyline roads in 1965, De Grazia would tell of a small chapel he had built in 1952 for people to come and meditate in. The chapel which he later named The Mission in the Sun was devoted to the Lady of Guadalupe who had appeared to the people of Mexico and to honer Father Kino who DeGrazia admired.

While De Grazia's popular pastel drawings of Southwestern children such as Flower Boy and Flower Girl and Balloon Boy and Balloon Girl, Drum Boy and White Dove projected a sweetness, De Grazia also produced modernistic dramatic images in brights reds and blacks. His Crucifixion series and Padre Kino series are very stark and dramatic images. It wasn't long until De Grazia began expanding his work to include pottery that was created from molds made of the ribs and boots of the saguaro. He would also add pewter figurines, wind chimes, jewelry, cards, plates, miniature figures, candles, glassware, books and post cards.

While De Grazia had a gruff exterior in his beat up hat and worn clothing, he was always so gracious whenever my family would take visitors to his studio. It was a standing joke in Tucson that it would be hard to find an article purchased from him at the Gallery of the Sun that De Grazia had not personally signed. He made national news on May 12, 1976 when he journeyed into the Superstition Mountains near Apache Junction, Arizona and burned 100 paintings to protest the inheritance tax. While there isn't any doubt that he did this, he couldn't bear to burn his most famous paintings.

De Grazia died in 1982, but his Gallery in the Sun and Mission in the Sun continue to attract tourists from all over the world. The ten acre site of the chapel and gallery and other buildings that De Grazia constructed on the property is now a museum and is listed on the National Register of Historic Places. The Gallery displays eight hundred of De Grazia's original works. It is maintained by the DeGrazia Foundation. De Grazia left behind such a large body of work that the staff at his gallery continues to make sure that his work is routinely rotated. Admission to the Gallery is free. In 2009, a special year long Centennial celebration of his life and art was held.

As I paint, I feel a magic goes into some paintings. I don't talk about it, because paople may not understand. But I really feel the magic. DeGrazia 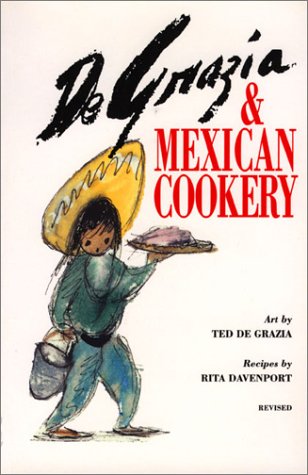 God and the Mouse