Balm of Gilead is a herb of the forests

Balm of Gilead (Cedronella canariensis ) is a pretty wild flower and aromatic herb that grows in clearings and at the edges of forests in Tenerife. It is known in Spanish as Té de Canarias (Canary Island Tea) and Algaritofe. In English it is also called Canary Balm.

Besides Tenerife, it is found growing on the neighbouring islands of La Gomera, La Palma, Gran Canaria and El Hierro but not on Fuerteventura and Lanzarote which are too hot and dry for its needs.

Balm of Gilead is also found growing wild on Madeira and the Azores and in some herb gardens around the world where it has been cultivated.

Balm of Gilead on Amazon 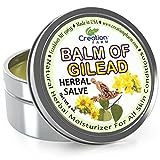 Description of Balm of Gilead

Balm of Gilead grows to several feet in height and is a perennial plant. It is a member of the sage and Mint family or Labiatae and like so many plants in this group it is aromatic and has medicinal properties.

It has trifoliate leaves and bears clusters of pale lilac-pink flowers making it an attractive wild flower or herb for the garden.

As a herb it has been used as a treatment for coughs and colds and is taken as a tea or infusion of the flowers and leaves. It is also a relaxant and antidepressant. Its wonderful smell alone is enough to revive the spirits.

Balm of Gilead has been recommended a remedy for chest complaints and breathing difficulties and it is inhaled as a decongestant.

The scent of Balm of Gilead has been described as a mixture of Camphor and Lemon Balm and also a bit like Eucalyptus. It is a wonderful perfume whatever you think it smells like.

Its aroma and medicinal properties are caused by a range of volatile substances it contains including pinene, limonene and pinocarvone. The herb also contains terpene, cedronellone, 3-methyl-kaemferol and ursilic acid.

It was once a popular herbal tea in the Canary Islands but has fallen out of fashion for some reason. Nevertheless it is a good remedy for coughs and colds and provides some pain-relieving properties too as well as being good for the digestion.

With its very pleasant aroma Balm of Gilead can be used as an ingredient in pot-pourris as well as all its other uses.

Balm of Gilead is also the name of a balm (healing substance) that can be made from the resinous gum of the North American Balsam Poplar (Populus candicans ).

The Balm of Gilead herb can be grown from seed but the plant needs protection from frosts and will not survive sub-zero conditions if grown outside. It makes an excellent addition to the herb garden though.