The strange looking Dragon Tree (Dracaena draco) is one of several trees that grow in Tenerife that have medicinal properties which make them included in lists of herbs as well as trees. The Dragon Tree grows to a massive size with age and there is a very famous specimen growing in the city of Icod de los Vinos in Tenerife's northwest.

This particular Dragon Tree is known as the "Drago Milenario" and is believed to be between 1,000 and 3,000 years-old. Looking at its massive size and mighty mushroom-shaped head of branches that fan on out from its weird looking trunk it is east to believe this age.

Many tourists arrive to visit this famous tree which grows in its own little park that is known as the Parque del Drago. The Drago Milenario has become recognised as plant symbol for the island of Tenerife.

Description of the Dragon Tree

The Dragon Tree, or "Drago" as it is known in Spanish, grows from a hard rounded seed that is carried in an orange berry. It takes a very long time to grow and its trunk forms as the long sword-shaped leaves develop and die or are pruned away, as is a common practice in the Canary Islands.

The tree carries a large terminal rosette of these spiky and leathery leaves at the end of its trunk and any branches that develop but a Dragon Tree will not branch out until it has flowered. It may take as many as 10 years for this to happen the first time or even longer.

The Dragon Tree sometimes develops aerial roots, and in an older specimen like the Drago Milenario  it was thought that these were the beard of a many-headed dragon of mythology.

The bark of a Dragon Tree is a silvery greyish colour and where there are any cuts in it a deep red colour develops. This is because the tree's resinous sap dries dark red and it is known as "Dragon's Blood."

Dragon Trees grow on Tenerife, La Palma, Gran Canaria and La Gomera in the wild but are very rare now. They are found on mountainsides and rocky cliffs.

Because of the very exotic and ornamental quality of the Dragon Tree they are cultivated and very often seen in streets, gardens and parks around the islands. They tend to grow into a characteristic fan-shape at the top of the trunk in old specimens.

Dragon Trees produce inflorescences that carry many small whitish flowers which change into berries that go from green to orange-red as they ripen.

Because of its red Dragon's Blood resin and spiky leaves this tree is believed to be ruled by Mars the God of War, according to astrological herbalism.

Properties and uses of the Dragon Tree

The Dragon Tree resin has in the past been dried and ground into a powder that was used to strengthen the gums and keep the teeth healthy as well as a remedy for ulcers and haemorrhages. It was used medicinally all the way back in Roman times.

The bark of the Dragon Tree was used long ago by the Guanches, who were the original Canary Islanders before the Spanish invasion and conquest. These people made shields from the tree's bark. They also hollowed out the trunk of large specimens to use as bee-hives.

It is said that the Guanche leader and his advisers used to hold meetings under the Drago Milenario in Icod and it is easy to believe that the spot was used in this way.

The Dragon's Blood resin has also been used as an ingredient in lacquers, varnishes and dyes to which it imparts its dark red colouring.

A red alcoholic liquor is prepared from the Dragon Tree and sold in many places today and its seeds are also sold in packets. Small Dragon Trees are often seen on sale in garden centres and in tourist shops and centres.

You can even buy a baby Dragon Tree at the main airport in the south of Tenerife! 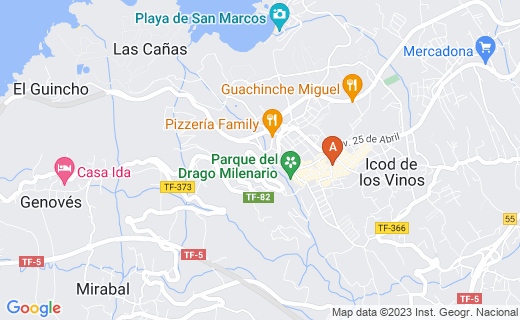