Simon Schama's "A History of Britain"

I'll not delve into every period that Schama devotes a chapter to, but I will try to point out a few of the events that Schama sees an integral to the development of British history. If you are writing a term paper, then pick out one that seems interesting and read as much as you can about it. You'll be amazed how much there is to learn! If you aren't a reader, then make sure to check out the documentary that Schama put together. It really does bring British history to life with stunning imagery and a lively narration that will be sure to give you some ideas for a term paper topic.

The Norman Conquest and the Battle of Hastings

The mists of Britain's prehistory gradually cleared to reveal a tiny island that drew the attention of Rome. The island became a Roman outpost from the 1st century A.D. until the 5th century, when it fell to a new foreign power, that of the Saxons, Jutes and Danes.

The 11th century saw the arrival of a new people in Britain: the Normans. Edward the Confessor lay dying, heirless, and the battle for the throne ensued. William the Conquerer, the Battle of Hastings and the Norman Conquest are all the stuff of legends. The people make for a drama as potent as any "Game of Thrones" book, and the imagery of the Bayeux Tapestry connects the events to us in a personal way. My vote: a great term paper topic if ever there was one.

The Black Death & Its Effect on Britain

Schama paints a vivid picture of the horrors that were ushered in with the spread of the bubonic plague in the 14th century. As always, he does a masterful job of connecting the plague with its social and political ramifications. These results of the plague in Britain would make for a great term paper topic. If that's a bit too deep for you, focus on the plague's arrival in Britain and the rapidity with which it spread. It's astounding, to say the least.

The Drama of Queen Elizabeth and Mary, Queen of Scots

In his episode entitled "The Body of the Queen," Schama does a marvelous job of portraying the intricate political workings behind the relationship of Queen Elizabeth I and her cousin Mary Stuart. The intrigue revolved around the issue of religion, because Mary was a Catholic and Elizabeth a Protestant. Years of behind-the-doors plotting and brazen double crossing make this subject one of the most dramatic subjects a term paper could cover. If the plot gets too confusing, however, choose only one person on which to focus, or possibly even dig up the info on a player that stayed behind the scenes. Mary Stuart's second husband, Lord Darnley, would make a good subject for a secondary player in the time period, as would Queen Elizabeth's lover, Lord Robert Dudley.

Charles I, Oliver Cromwell and Revolution

Schama's episode called "Revolutions" weaves together the separate threads the began early in the reign of Charles I. His leadership fostered many ill feelings in the British Parliament, feelings that eventually boiled over into the English Civil War. Charles did his best to manage the crises of his later rule, but the popular sentiment proved too much to handle, and after a Second English Civil War, Charles was captured and executed by Parliament.

Enter Oliver Cromwell. Cromwell is one of the most fascinating of subjects for a term paper. He rose to the top of the commonwealth after having held great sway in the ranks of the opposition to the crown. He was integral in establishing the Commonwealth that governed England after Charles I, and he did help institute many governmental reforms. He became the "Lord Protector" of the government, but the Protectorate did not last long. Cromwell died, and the Royalists took power once again, instating Charles II as the king. An interesting side note for a term paper could focus on the posthumous exhumation and ritual execution of Cromwell's body by the Royalists. Intense stuff!

The Growth of the British Empire

Another topic that lends itself well to a term paper is that of the early British Empire. Exploration, colonization and the people who blazed the trail make for quite interesting topics. Schama's episode is entitled "The Wrong Empire." This time period offers no end of subject matter, as the years 1750-1800 saw the establishment of colonies in the Caribbean, as well as the issues of slavery that are tied in with it.

The American Revolution also took place during this time period, and for an American student, it could make a great exercise to try to write a term paper exploring the revolution from the British point of view. Doing so can bring to light many of the controversial issues that fueled the tension of the time, but it is also a great learning exercise. The last possible topic I'll mention is that of the British East India Company. If ever there was an interesting company to write a term paper about, the British East India Company is the one. Its story is chalk-full of intrigue, double-crossing, plot-twists and discovery that serve to make its story a most exciting topic. In short, the last 50 years of the 18th century are some of Britain's most eventful, and a perfect stop for the term paper researcher.

Queen Victoria is quite possibly one of the most widely recognized figures of British history, and as thus, she would make a good term paper topic. You won't hurt for lack of resources either. Another plus is that the era that has come to bear her name is packed full of other interesting subjects. Industrialization fueled a rapid growth of the empire, and the first World's Fair was held in 1851. Advances in technology and science fed on themselves and inspired more people to get in on the innovation. Charles Darwin published his famous work, On the Origin of Species in 1859.

If you're into the sensational murder mystery, then look no further than London's own Jack the Ripper. His string of murders in 1888 have become one of the most infamous acts of violence in modern history, and the mystery remains unsolved to this day. Theories abound, and you would have no trouble finding plenty of information about the events. The case was one of the first to start a global media firestorm, thanks to the proliferation of newsprint during the Victorian Era.

Each City Could be the Focus of a Term Paper 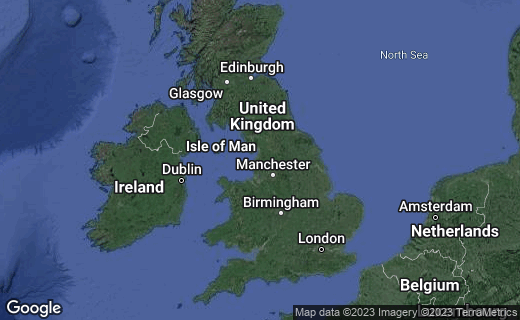 The possible subject matter issuing from British history is endless, but I'll conclude this broad list with a figure and event that changed the course of British history. Sir Winston Churchill is another of the most recognizable figures of British history, and justly so. His efforts on behalf of the British people helped save Britain from the same fate that much of Europe suffered at the hand of Adolf Hitler and the Nazi power. Sources that discuss the life and times of Winston Churchill abound, and Schama also devotes an episode and chapter of his history to Mr. Churchill.

The overarching theme of World War II is daunting in its enormity. If you are thinking of pursuing a term paper topic from this period, do your reading before hand to narrow down the subject matter. Look for a single person or place to examine, or possibly locate a single event and describe how it affected British history in its own way. If you like literature, you need go no further than George Orwell or Tolkien, C.S. Lewis even, all paragons of British literature from the 20th century.

I'm sure that to a student, reading is not one of the most alluring ideas. When it comes to any term paper though, it makes a world of difference if you make the time to read. If you didn't glean any ideas from this hub then pick up any book you see related to Britain and try to find something interesting in it. Schama's books are a great place to start if you can get your hands on them. Once you find that subject, person or story that is intriguing to you personally, the research and writing ceases to become a chore. Make your term paper an enjoyable discovery of learning rather than a drudgery! It usually makes for a better grade if you can manage to enjoy the paper as well :) Good luck!