The Battle of Marathon - Part Two of Two

Upon the arrival of the Greeks at Marathon, a standoff occurred that lasted for several days. During this time, there were no negotiations or fighting between sides. This standoff was one of the factors that lead to the division of the Athenian generals on the decision to fight or retreat. Some of these men believed that with the wide-open plain ahead of them, and the presence of Persian calvary and archers, the advantage weighed heavily in favor of the Persian army and any attack would be foolhardy.

The other camp believed as Miltiades did. They believed that further delay would ensure dissention in the ranks allowing the soldier’s time to think about what they were about to do and the consequences their actions held. They believed that this thinking time was a serious danger to troop cohesion that could lead to an eventual loss. From the Persian standpoint, this wait could very well have been exactly what the commander Datis was holding out for and decided to wait for a sign that the Greek resolve was weakening. It is also highly likely that the Persians were waiting for a sign from Hippias’ allies in Athens to provide them with aid.

During the end of this stalemate however, Datis put his plan into action and in the middle of the night, loaded his calvary and soldiers, and set sail for the Bay of Phaleron, leaving a holding force lead by Artaphernes, to face the Athenians. Miltiades scouts relayed this information to him. At this point, the Greeks had to decide whether to fight the remaining Persian forces on the plains of Marathon and then make a run back to Athens to help protect the city from the forces now on their way by sea, or to turn and run now and take on the entire army while defending Athens.

Miltiades believed that the Athenians could indeed fight and make the return journey back to Athens and so the Greeks decided to attack. The Greeks would stretch their army on a very wide front out of fear of being flanked. The Greeks would march across the mile long expanse of the open battlefield and about 140 meters before they engaged the Persian army they broke into a sprint. This not only surprised the Persians, who from the beginning had completely underestimated the resolve of the Greeks, but also allowed the Greek ranks to suffer fewer causalities due to Persian archers, javelins and slings. Fighting was intense in the center, where the Greeks were under the command of Themistocles and Aristides, but it was also, where the most experienced Persian troops were.

However, along the wings, in particular the left wing, the Greeks decimated the Persians and sent the Persian troops into a very hasty retreat. Both wings of the Persians broke and they fled back to camp. The center of the Persian army, now realizing that with both their flanks exposed, ran the risk of being out flanked, surrounded and attacked from the rear by the Greeks and had no other choice but to also retreat. The Greek commanders gathered their forces, pursued the retreating Persian army, and inflicted heavy casualties. The experienced Persians however did form a rear-guard and were able to bring further losses to a minimum as the Persians boarded their ships, moored in shallow water just beyond their encampment.

Herodotus tells that the battle would cost the Persians 6,400 men, an undetermined amount of captured and wounded, and seven ships. Astonishingly the Greeks suffered a mere 192 dead, which included their commander-in-chief, Callimachus.

This would however not be the final straw for the Persians. As they boarded their ships, they did not turn tail and run, but instead set sail towards the Bay of Phaleron. They intended to join the Persian forces that had departed earlier with Datis in an effort to capture Athens by sea before the Athenians could return from Marathon. Miltiades now had the monumental task of force-marching his tired Athenian troops back to Athens to defend the city. When the Persians arrived, they found a well defended Athens and the Persian leader Ditas, realizing that it would be futile to attempt any additional actions against the Greeks, stood down the Persian army and sailed back to inform the Great King Darius of the Persian failure. As promised, a contingent of about 2,000 Spartans arrived from Sparta, the day after the battle and upon inspecting the battle site, gave high praise to the Athenians for their victory before heading back to Sparta.

The Battle of Marathon had many significant and lasting results. It should be noted that even though this would be a resounding victory for the Greeks, it would not be the end of the Persians in Greece. On the contrary, even though the Persians would fight another half dozen battles, and even claim a physical victory at Thermopylae, they would continue to have influence on Greek society for many years to come. The great leader Themistocles, upon being ostracized, would find refuge in Persia, and even the Athenians themselves would turn to Persia for support during the Peloponnesian Wars.

The victory at Marathon would however be the first major battle for the young democratic society. It would mark the first time a Greek army had defeated a Persian force. This was no small feat. The Persian army was considerably larger than the Greek army was and had more experienced. They also had a military central source of power in King Darius as opposed to the Greeks, led by ten divisional commanders, which in the beginning caused confusion and disunion. It also would show that hoplite troops had the tenacity and skills to overcome lighter armed adversaries, even when outnumbered. However, one of the most lasting results of Marathon was unity, even if this unity would be brief.

Sparta, whose soldiers arrived at Marathon and gave praise to the Athenians, would join with the Athenians and go down in history at the Battle of Thermopylae. This would also lead to the alliance of Thespians, Thebans, Corinthians, and other portions of Greece, to stand up, and as Greeks, fight off the invading forces of their own freewill. For a brief moment in time, Greece would stand united as Greeks and the Battle of Marathon would stand for the fight for democratic freedom over tyrannical servitude. 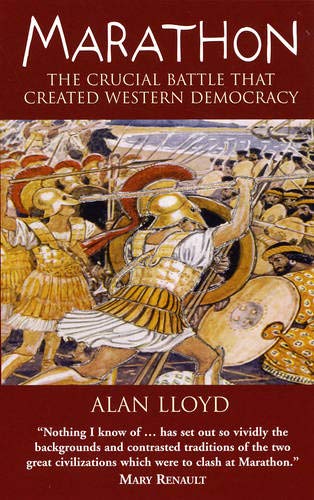