The State of Florida is full of surprises and a lot of the "first", 'biggest", and "only one left" attractions in the USA and the world.

For instance, small herds of scrub cattle are still found in the interior of Central Florida, not far from the 39th Greatest Place to Stand in the USA (www.StoodThere.com) - Kennedy Space Center. Not only that, but the Everglades as a whole is the largest wetlands in the world.

Florida is also the site of the oldest communities settled by the Spanish and French in the New World in the 1500s, long before the British and Germans came aboard. St. Augustine is one of these oldest communities, and ranks as the 37th Greatest Place to Stand in the top one hundred determined by StoodThere.com in a 2009 readers' poll. The city enjoys this status because of its Spanish fort called Castillo de San Marcos (Castle of Saint Mark).

This site is officially known in the national park system as the Castillo de San Marcos National Monument. St. Augustine is the first walled city to have been built in North America and its 450th Anniversary of founding is in 2015, with a year-long celebration planned.

The fortress seen in the image below was renamed for my favorite American Revolutionary war hero, Francis Marion - the Swamp Fox - from 1821 - 1942, as Fort Marion. However, it was then returned to its original name and retains that name to this day. 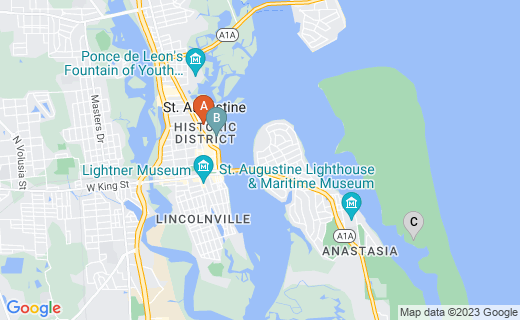 Fort Matanzas (Fort Slaughters) is a second National Monument in the city that commemorates Spanish rule, but also the Spanish killing of 250 or more French Huguenots at the site. Florida has been governed by several political entities, including Spain and France.

Amusingly, old meets new in the fact that very nearby the old fort stands Ripley's Believe it or Not Odditorium. How's that for commercial entertainment meeting history? Some of Ripley's findings have serious historical connections as well as entertainment value (I used to read all the Ripley's graphic novels and books as a kid).

Ripley's in St. Augustine opened a pirate's room in the museum and called it Predators of the Sea and it's quite exciting! Authentic costumes - some worn by skeletons - model ships, photographs and etchings, histories, torture devices, and all manner of piratey things that you might not expect. The Ripley museum itself is in a refurbished haunted hotel in which Robert Ripley used to stay on Florida visits.

Another nice find is Anastasia State Park just across the water of Mantanzas Bay from Downtown St. Augustine. It is a about 5 miles in length of undeveloped seahore and woodlands area with beaches and camping that allows for pets. The St. Augustine Lighthouse is nearby and interesting to visit. St. Augustine Beach, Butler Beach, and Crescent Beach are to the south of this area. Beaches and preserves continue down the coast on Highway A1A.

Ripley's Museum Is All About Pirates

Things to See Around St. Augustine

This is a significant consistent increase from 2011 - 2017, with the highest demand jobs listed below.

Fastest growing jobs are expected to be in the following titles: