Best and Verse of Ogden Nash

When I was a little boy, I loved learning new words. I used to visit all the old book shops in town where I grew up and buy tattered paperback books from the meagre money I saved from my bus fare. I loved playing with words, writing poems, stories and composing crosswords.

As my parents wanted me to further my knowledge, they never policed what I was reading (big mistake!) but as a result my reading was far and wide and very eclectic.

I was about ten when I discovered a collection of verse. I was struck by the sheer exuberance of the word play here. The author of these poems was clever and unconventional and broke all the rules of rhyming. He invented new words when he didn’t have the right one to rhyme. He rhymed punctuation marks (for example ‘hummer’ with a ‘comma’!), he rhymed sounds rather than words. More importantly he seemed to combine wit with wisdom and had an anarchic, skewed yet always exciting view of the world.

I fell in love with his poetry.

Hark to the whimper of the sea-gull;

He weeps because he is not an ea-gull.

Suppose you were you silly sea-gull.

Could you explain it to your she-gull?

I laughed, I marvelled, I enjoyed and was entertained by this wonderful writer. If you haven’t heard of him or read his works before, you are in for an absolute treat.

I present to you, for your delectation, the Best & Verse of Ogden Nash. (sorry, I just couldn’t resist the pun!)

Throughout the article, I shall present his work in little illustrated posters that I loved creating as his tribute. Enjoy!

The Journey of Ogden Nash 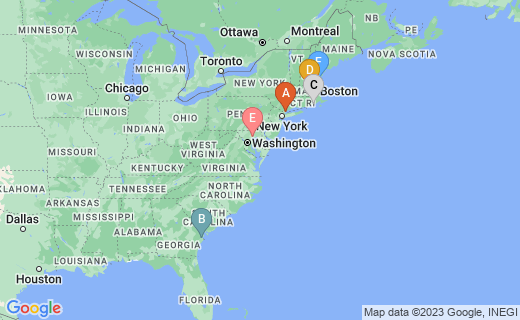 Nash was born in Rye, NY

Lived in Savannah, Georgia as a child

did a years stint in Harvard

...and lived in Baltimore, Maryland from 1934 until his death

Frederick Ogden Nash was born in Rye, New York on August 19, 1902. His family is descended from the family of General Francis Nash who gave the name to Nashville, Tennessee. Nash loved to rhyme from an early age and enjoyed learning new words.

After living in Savannah, Georgia, Nash went to St George's school in Rhode Island and entered Harvard. He didn’t stay there for more than a year and left in 1921 to do a series of jobs.

He worked variously as a Wall street bond salesman ( he only sold one bond, to his godmother!), a school teacher at St George's school and then went to work as an advertising copywriter for streetcar signs. He finally found his calling as an editor at Doubleday publishers.

Here he was reading many a manuscript that was dire and tiresome. He later said reading such poor quality work was what inspired him to write. Initially he wanted to write 'serious' verse in the style of romantic poets but soon started producing comic verse that he often scribbled on pieces of paper.

Nash moved to Baltimore in 1934 and lived there until his death in 1971. He married Frances Leonard in 1931, the same year he published his first collection of verse, Hard Lines. They had two daughters Isabel and Linell.

Nash's twilight years were plagued with recurrent illness from his chronic Crohn's disease. Despite the painful problems, he never lost his sense of humor or his love of the written word. Even when he spent long episodes in hospital, he wrote verses using his astute observations on medicine, the medics and the patients. These were collected together in1970 as 'Bed Riddance: A posy for the indisposed'

Nash finally succumbed to complication arising from his problems on May 19th, 1971 at Johns Hopkins Hospital in Baltimore. He is buried in North Hampton, New Hampshire's East side Cemetery.

As an editor at Doubleday Nash became interested in writing verse and initially collaborated with a friend Joseph Alger in creating a children's book called 'The Cricket of Carrador'. He also wrote a satire on classic literature called ' Born in a Beer Garden: She troupes to conquer'.

It was in 1930 that he wrote a poem called 'Spring comes to Murray Hill'. After initially trashing it, he rescued it and had the courage to send it to the 'New Yorker, the premier american magazine of the time with a wide readership.To Nash's surprise, the magazine not only accepted his poem but also wanted him to write more.

He started contributing regularly and got a contract from them, eventually inviting him to join the staff. Nash left his editor job at Doubleday and joined the New Yorker staff. His first collection, 'Hard lines' was published in 1931 right in the middle of the Great depression. America needed cheering up and Nash's comic verse was just the ticket. The book was an instant hit, especially for a collection of poems. It went through seven printings! Ogden Nash is best know for his comic verse and he wrote hundreds of them, thankfully. His stint in New Yorker and the success of his book lead to him eventually going freelance. He wrote prodigiously in many magazines and became a favorite humorist of all of America.

Nash not only did whimsy and silly, he was also a great satirist, gently poking fun at the establishment, the quirks on English language, sanctimonious senators and politicians, fanatical religious preachers and anyone who was pompous. The public adored his humor.

He was soon the favorite guest in many radio shows and on Television too.

Ogden Nash published several popular collections of verses in his lifetime and enjoyed mass popularity. He was able to gather together many of these in themes, including poetry about animals, insects, people, practices and politicians. For Adults and Children

Ogden Nash's poetry has enjoyed a resurgence as poetry for children in the nineties. Sumptuously illustrated by various illustrators, these are a joy to read to your kids. His trademark wit and wordplay lend themselves well to be read aloud. A whole new generation can enjoy the 'Nashisms'.

Nash was very fond of his two daughters ( The Adventures of Isabel was written for his eldest) and as he was freelancing mostly when they were born, he was able to spend a lot of time with them in their formative years. He felt this kept him happy and cheerful.

He wrote wonderful a Christmas verse about 'The Boy who laughed at Santa Claus' - a cautionary tale for non-believers! He was able make recordings a lot of his work and enjoyed broadcast media.

Nash was also a huge baseball fan and had a lifelong love for the sport as well as for his team the Baltimore Colts. He wrote a collection of sports poems entitled ' Line up for yesterday' featuring an all star cast of base ball players from all era, one for each alphabet ( listing himself under I as the fan!). Carnival Of Animals - A performance

Ogden Nash also collaborated in writing screenplays in his early years. He wrote for three MGM Musicals The Firefly (1937), The Shining Hair (1938), and The Feminine Touch (1941).

He worked with humorist and librettist SJ Perelman and composer Kurt Weill in the Broadway musical 'One Touch of Venus'. This was a huge success and was alter made into a film starring Ava Gardner.

Nash also composed readable verses to French composer Camille Saint-Saen's "Le Carnaval des animaux" which has since become a favorite performance piece for children. There is an original recording of this made in 1948 and Nash's British friend actor, performer and playwright Noel Coward read the verses to accompany the composition. It has since been a favorite performance piece for various actors such as John Cleese, John Lithgow and many more. Do listen to this wonderful original recording here on this video.

He was elected to the American Academy of Arts and Sciences and the National institute of Arts and Letters for his contributions. He also wrote for Television, notably for Peter the Wolf and The Sorcerer's Apprentice.

Nash revealed a more lyrical side in his musicals and showed he could also write tender loving songs.

His ever present tomfoolery, effortless wordplay, peerless poetic insight, compassion and the ability to poke fun at the establishment make him one of America's premier literary figures. Nash is a persistent pleasure. Get a collection of his and when you're feeling blue or jaded, dip into one of his poems and all will be well with the world. Remember, he single handedly sustained the literate Americans through the Great Depression!

The world needs the likes of Ogden Nash.

Thank you for reading this . I hope you enjoyed this tribute to Ogden Nash.. Please do leave some comments and feedback below. Please do vote as appropriate!

The Adventures of Isabel (Written and Performed by Ogden Nash)