The Cahaba Civil War Prison, The Prison With a Compassionate Warden

During the four years of the American Civil War about 200 prisons were established on the Union and the Confederates sides but initially there weren't many until the war dragged on longer than anyone had expected. At the on set of the war prisoners were exchanged on a regular basis between the two armies right on the battlefield. But as the war progressed the rules would be changed and the prisoner exchange system would become broken. General Grant would eventually stop it all together. Consequently, structures were built to become permanent human holding pens and as a result, many of them exceeded their intended capacities and became some of the most horrendous places for survival. Of all the places to end up as a prisoner, Cahaba Prison in Alabama offered the highest chance of survival because of the humane actions of one man.

The Origin of the Cahaba Prison

Within the first year of the war, prisoner exchange was carried out on the battlefield with prisoners being treated like chess pieces between the two armies. Privates were exchanged for privates, sergeants were exchanged for sergeants and if you wanted your general back at least 10 or more privates had to be exchanged from the opposing army. Eventually, the system started to stall after several months of fighting until two generals, one from each side, proposed an agreement to formalize the prisoner exchange program to get it moving again. Union General John A. Dixon and Confederate Major General Daniel H. Hill proposed a prisoner exchanged program that was officially accepted by both sides on July 22, 1862. The agreement was called the Dix-Hill Cartel and was followed for only 3 months under this agreement until October 23, 1862, after the Union Secretary of War Edwin M. Stanton terminated it. The agreement was ended because the two sides could not agree on how to treat the slave prisoners. However, prisoner exchange would continue without the agreement for about another two years until General Grant terminated it in the summer of 1864.

The termination of the Dix-Hill Cartel caused a backlog in the prison exchange process which led to an increase in over crowdedness in the prisons and fueled a demand for more prison space on both sides. Additional space for prisoners were created by several methods. The existent jails and penitentiaries obviously were the first places to find additional space for the growing population of prisoners but it was not long before they reach their capacity. The use of forts was another alternative since many of them were ideal places to house them because of the high walls they already had which were perfect to deter any attempts to escape. Some prisons were created by simply enclosing barracks or tents with walls and the worse kind were the open stockades located mostly in the South. The final type of prisons were the ones created from conversions of warehouses or large buildings. The Cahaba Prison was this type. It was established from a converted cotton warehouse located on the banks of two rivers, the Cahaba and the Alabama Rivers flowing by a small town called Cahaba located not far from Selma, Alabama. 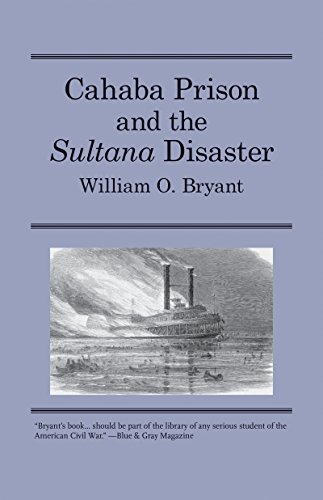 The dimension of the converted warehouse was 125 feet by 200 feet with about 15,000 square feet of enclosed space to house the prisoners. It was establshed originally to hold 500 Union prisoners but would later hold six times that number. The brick walls of the building were about 14 feet high and was partially covered with a roof while about 1,600 square feet of the floor did not have a roof since it was never completed leaving some prisoners exposed to the elements during their imprisonment. The covered portion of the warehouse contained 250 bunkers, one atop the other with only one fireplace to heat the large warehouse.

The Commanders of Cahaba Prison

The Cabaha Prison had two commanding officers running the place. It was an odd couple type of situation. One of the officers was a Methodist minister named Rev. Dr. Howard A.M. Henderson who took this position in July of 1863 and the other officer was Lieutenant Colonel Samuel Jones who came on board about a year later on July 28, 1864.

Prisons were considered by many soldiers to be very despicable places because of the extremely horrible conditions the prisoners endured with mortality rates as high as 33% if you were unfortunately enough to end up in the Confederates' infamous Andersonville Prison in Georgia. Henderson made conditions a little more bearable as a compassionate leader at Cahaba Prison. Despite the deplorable conditions there only 147 of the 3,000 prisoners held there died during his tenure because of his good nature. For comparison, almost 14,000 prisoners died at Andersonville under a much less compassionate leader.

Lieutenant Colonel Samuel Jones, on the other hand, was the complete opposite of Henderson. He showed much more cruelty toward the prisoners when he first came there and what made matters worst was that he was not supposed to be there. Military authorities did not support having more than one commanding officer running one prison concurrently and no official records were ever found authorizing him to be there. Furthermore, Henderson had another duty as an exchange agent which kept him away from the prison frequently leaving Jones in charge but a few years laters Jones would become a much softer commanding officer after the occurrence of flooding at the prison in February 1865.

The Compassionate Acts of Henderson

Prison population increased slowly in the first two years in some prison, but by the third and final year of the war it increase much quickly after General Grant put a halt on the prison exchange process by mid 1864. At Cahaba Prison, the population went up by 660 prisoners by August of 1864 after it was first established two years ago to hold 500 prisoners, but then increased quickly to 2,151 by October 1864. The population there would later reached its peak of 3,000 prisoners by March of 1865 about a month before the war ended. At this point conditions for the prisoners really started to deteriorate and Cahaba Prison would become the most crowded prison on both sides of the war despite it small size.

Henderson allowed outside intervention to improve the quality of life for the Union soldiers in his prison. Ironically all this help came from the enemy side, the Confederates supporters. Amanda Gardner whose home was situated just outside of the prison walls provided gifts, books, and blankets to the prisoners. These caring acts from her boosted the morale of many of the prisoners. Her good will was allowed because of Henderson's compassionate ways and with the help of some friendly guards who allowed her daughter to sneak into the prison through cracks in the walls just large enough for a child to get through.

Henderson even allowed prisoners to receive medical treatment outside of the prison by sending them to a local hospital which greatly improved the survival rate in the prison. Chief surgeon Louis Profile and prison surgeon R.H. Whitefield treated both the injured Confederates soldiers and the Union prisoner with equal treatment. It was Whitefield who made an earlier report in 1864 about the water quality here. He wrote the water after flowing about 200 feet through the town to the prison, "has been subjected to the washings of the hands, feet, faces, and heads of soldiers, citizens, and negroes, buckets, tubs, and spittoons of groceries, offices, and hospitals, hogs, dogs, cows, and filth of all kinds from the streets and other sources." The water was later collected in pipes to provide the prisoners with clean water.

In the end, Henderson most significant act was the continuation of his work as an agent in the prisoner exchange program. He left the Cahaba Prison in January of 1865 to establish a neutral transfer facility for prisoners in Vicksburg, Mississippi with help from Union officer Colonel A.C. Fisk. The facility, Camp Fisk, was established after Grant allowed the two sides to resume prisoner exchange once again. Prisoners arriving here, mostly from Cahaba, were given adequate food and much needed medical attention.

Then on the early morning of April 27, 1865, tragedy struck. A boat called the SS Sultana sank near Memphis, Tennessee after an explosion, just three days after leaving from Vicksburg with 2,000 Union prisoners on board. About 1,300 men were lost that morning. Unfortunately, more than half of the prisoners on the boat owe their life to Henderson for his humanitarian acts he performed at the Cahaba Prison to keep them alive while they were there. Henderson, himself would live for a few more decades after the war in Cincinnati, Ohio where he would die in 1912.

The Cahaba Prison is no longer around after the 1865 flood basically decimated the little town. The town was eventually moved to what is now Selma, Alabama and the abandoned warehouse was sold to a former slave. The warehouse was demolished for its bricks by the owner.

Approximate location of the Cahaba Prison during the Civil War 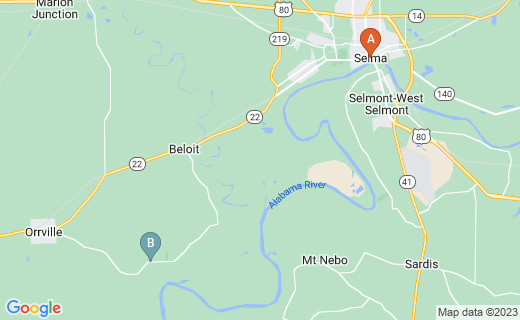 The Cahaba Civil War prison was located about 8 miles southwest of Selma, Alabama next to the Alabama River.

The Cahaba Civil Prison was located around this location.