The Conundrum: Can We Find a Theory of Everything?

Yusrat is a high school student from Bangladesh. She writes about Science & Technology.

Two of the fundamental theories of physics are Quantum Mechanics and General Theory of Relativiy. These two pillars have been the major invention of 20th century. Both of the theories have successfully graduated from the all experiments of extreme and unbelievable accuracy. Relativity provides us a framework for comprehending universe on the scale of galaxy and stars; while quantum mechanics gives us an insight to the world of atomic scale and how it works. One of the goals of Physics is to find a single theory that unites all of the four forces of nature. These are; electromagnetism, gravity, and the strong and weak nuclear forces. So easily, unifying these two fundamental laws of physics will be a ground breaking revolution to understand the universe’s all physical phenomena. But tough work, it is. If quantum mechanics is used to gather with general relativity, the probability comes up is an infinite probability which doesn’t work. Because any answer above 1 is meaningless.

A theory of everything (TOE or ToE) is actually final, ultimate or master theory of physics. The best property of this theory is it is a hypothetical single, all-encompassing, coherent theoretical framework of physics that fully explains and links together all physical aspects of the universe. Finding a TOE is one of the major unsolved problems in physics. That is where gravity meets quantum mechanics.

Einstein spent last 30 years of his living to find out a unified theory that will explain all the physical phenomena of universe, while the physics community complained that Einstein contributed nothing in his last 20 years of life. Yet he tried over and over again to find a way to unite electromagnetism and gravity but never succeeded. But it was his strong believe that there had be a single theory that would encompass universe’s all physical events. Finding a theory of everything would be a staggering achievement, finally making sense of all the weird and wonderful things in our universe. But he wasn’t the only one in his quest. There were several scientists who believed and agreed that yes, there ought to be a unified theory. For decades, confident physicists have said that one is just around the corner. In 1918, Herman Weyl proposed a unification scheme based on the geometry of curved that Einstein used while developing general theory of relativity. Few years later, inspired by Weyl, Theodor Kaluza made his statement that if space time were extended to five dimension, then four of these dimensions would encompass relativity while the fifth dimension would be Maxwell’s Equation of electromagnetism. In fact, Einstein himself was pretty much taken aback by the approach. He extended another dimension and tried to solve the condemn. But pity! He died before he could reach his conclusion.

From Classical Mechanics to Quantum Mechanics

It began like this: The English physicist Isaac Newton published a book in which he explained how objects move, and set out how gravity works. The Philosophiæ Naturalis Principia Mathematica – that's "Mathematical Principles of Natural Philosophy" presents us how the world is an ordered place. The story goes that, at the age of 23, Newton was lurching in a garden when he saw an apple fall from a tree. At the time, physicists knew that the Earth somehow pulled objects down by the force of gravity. Newton would take this idea further. But he, newton, knew his flaw.

For instance, gravity doesn't explain how small objects hold themselves together, as the force isn't strong enough. Also, while Newton could describe what was happening, he couldn't explain how it worked. His mere theory was incomplete. But it took sheer two hundred years for science to come up with solution of the problem. In 1900, Max Plank proposed his revolutionary Quantum theory which included quantum field theory. Quantum mechanics is a fundamental theory in physics which describes nature at the smallest scales of energy levels of atoms and subatomic particles and balck body radiation while Newton’s classical mechanics describes at an ordinary level. Physics began to change its hue. In 1915, Albert Einstein came to the rescue with his theory of general relativity, the core idea of space-time. He extended three dimensional space to four and named the forth as time. Einstein's idea was that really heavy objects like planets, or really fast-moving ones, can distort space-time. It's a bit like the fabric of a trampoline: if you put a heavy weight on it, the fabric bows and curves. Any other objects will then roll down the sheet towards the object. This, according to Einstein, is why gravity pulls objects towards each other. His general theory of relativity explains planetary movements, especially the oddity in Mercury’s movement, including how galaxies work. His theory predicted existence of an eerie place of universe: The Black Holes, which Einstein personally didn’t like at all.

Quarks are particles that are not only hard to see, but pretty much impossible to measure. These teensy-tiny particles are the basis of subatomic particles called hadrons. The first quarks appeared about 10^minus 12 seconds after the universe was formed, in the same era where the weak force (which today is the basis for some radioactivity) separated from the electromagnetic force. The antiparticles of quarks appeared around the same time. Physicists refer to the different types of quark as flavors: up, down, strange, charm, bottom, and top. The biggest differentiation between the flavors is their mass, but some also differ by charge and by spin. For instance, while all quarks have the same spin of 1/2, three of them (up, charm and top) have charge 2/3, and the other three (down, strange and bottom) have charge minus 1/3. And just because a quark starts out as a flavor doesn't mean it will stay that way; down quarks can easily transform into up quarks, and charm quarks can change into strange quarks.

On the other hand, in particle physics, a lepton is an elementary particle of half-integer spin that does not undergo strong interactions. Two main classes of leptons exist: charged leptons, and neutral leptons. Leptons have charge of +1e, 0e, -1e. Leptons have also spin like other subatomic particles. It has a spin of half. Particle physicists refer that leptons are of six types. They are: electron, electron neutrino, muon, muon neutrino, tau, tau neutrino. Leptons respond only to the electromagnetic force, weak force, and gravitational force and are not affected by the strong force. Leptons are said to be elementary particles; that is, they do not appear to be made up of smaller units of matter.

So it is pretty much clear that Quarks are always within larger particles like protons are neutrons. They are never found individually in the nature, held together by strong nuclear force. Leptons, which includes electrons, are not effected by strong force. However, both, quarks and leptons are effected by weak force, which is responsible for certain sort of radiation. The strong nuclear force is responsible for holding the central part of atoms (their nuclei) together, while the weak nuclear force is involved in the decay of these nuclei. Strong force is stronger than electromagnetic force over smaller distance. While gravity is the weakest of four fundamental forces and has a range of infinity, electromagnetic force is much stronger and has also an infinite rage.

In 1970s, physicists developed the standard model of particle physics. The process began in 1960s when Abdus Salam, Sheldon Glashow and Steven Weinberg announced a unified theory of electromagnetism and weak nuclear force. The framework suggested that the weak force was carried by particle named W and Z bosons. The weak and strong nuclear force and electromagnetic force had been unified in the framework. All these three forces are result of exchange of force carrier particles called photon and W and Z bosons. The theory explains how the electromagnetic, strong and weak nuclear forces, along with their force carrier particles, act on all of the matter particles. The theory late Nobel prize in physics. These theory unified three of the fundamental forces and merged into a single force. So it is called Grand Unified Theory (GUT)

Since then the development of theory of everything gathered further momentum. Physicists introduced gravitational force carried particle Graviton years later. Even though the existence of graviton has not been found yet.

The Most Promising: String Theory

Right now, the most promising candidate of a theory of everything is String Theory. It not only refers to a theory of gravity in atomic scale but also seeks a unified and concrete structure of universe by uniting all the fundamental forces and the standard particle model. In attempting to unite gravity with the three other forces, string theory requires us to change the way we view the universe.

The heart of string theory is the idea of strings. According to the theory, all fundamental particles are nothing but just different manifestation of one basic object called string. These strings do look alike the strings of guitar. The different particles are like the different notes that can be played by bowing a violin string. However, the strings of string theory almost certainly would not look like violin strings. The properties of particles depend on the vibration of strings. One of the interesting facts of this string theory describes a string that looks exactly like a graviton: it spins in the right way, is massless and travels at the speed of light. For the first time, general relativity and quantum mechanics had found common ground.

Can string be found? We don’t know. May be some day CERN’s Large Hadron Collider will solve the answer to the question. But till now, the current associated technologies don’t support facilities to conduct such experiment. Moreover, String theory also requires us to accept the existence of seven more dimensions!
A universe of eleven dimensions seems strange to us but many physicists think these extra dimensions are possible and are looking for ways to detect them.

The attempt to unify the 4 forces of nature is one of the most exciting areas of physics and we all hope someday this unsolved mystery of universe will be solved. May be there lies the true story of creation of universe. We don’t know. All we can do wait and search. On and on. 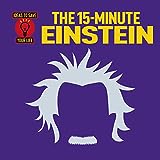 The 15-Minute Einstein (Ideas to Save Your Life)
I personally found this book really useful. It has easy description of relativiy and quantum mechanics even though the book mainly focuses on Einstein's contributions to Physics. Absolutely loved it!
Buy Now