The Naica Crystal Caves in Mexico

The Crystal Caves or “Cueva de Las Cristales” located below a desert area in northern Mexico about 150 miles south of the United States border. They are the most usual and most unique caves in the world. They are only found in the Naica Mine located over a fault line about 67 miles south of Chihuahua City. These caves have the world’s largest natural rock crystals.

History of the Caves

Early prospectors first discovered these caves in 1794 when they struck a vein of silver at the base of a range of hills called Niaca. From the time these caves were first discovered up to about 1900, these hills became the main source of silver and gold and later became the main source for lead and zinc when the demand for them made them more valuable.

The mines were closed in 1911 after an incident that occurred during the Mexican Revolution when one of the owners refused to give money to some revolutionary soldiers demanding it. The mines were later reopened in 1922.

In 2000 two brothers, Juan and Pedro Sanchez, discovered another cavern while they were drilling a new tunnel called Crystal Cave. What they discovered was a cavern with extremely large and beautiful crystals. These crystals were much larger and more spectacular than the previous ones. Many of these crystals were damaged from miners desperately trying to remove them from the cave and to prevent further damage the Sanchez brothers ultimately had steel doors installed to keep them out. Eventually one miner managed to make his way beyond the steel doors and suffered a deadly fate. He was later found baked to death from the 113 °F temperature in the interior of the cave. 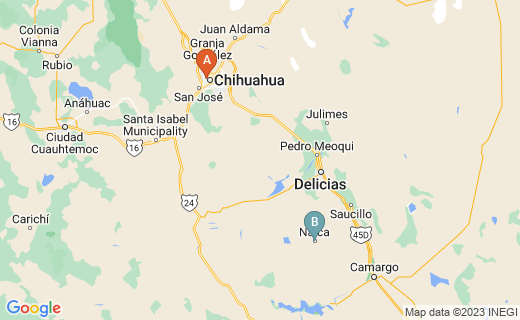 The Caves are located in the Niaca Hills. It is 150 miles from the Texas border. It is home to 5,000 people. Best viewed in "Terrain" mode and zoomed.

Fact About the Caves

These caves were aired on National Geographic Channel in October 2010 showing a team of scientists and explorers revealing the beauty and danger of these incredible caves. The caves are located between 1000 to 2000 feet below the Naica Hills in a lead mine and are about the size of a football field and are two stories high at it’s highest point. These are not your average tourist friendly caves. For starters, the temperature in these caves is an incredible 113°F and the humidity level is a tropical 90% level. At these conditions humans can only tolerate this environment for five minutes without falling prey to the extreme conditions. The source of the heat is a fault line that the caves are situated on and further in the cave there is a spot where the temperature is an astonishing 122°F and the humidity is 100%.

In order to explore and document these caves, the scientists had to wear special suits lined with ice packs and to make breathing easier the suits were also fitted with a respirator unit to cool the air for breathing. These suits weighed about 45 pounds and this made it pretty difficult for the scientists to move about in the caves. However, these suits prolong the survival time in the deadly heat for 45 minutes.

The crystals in the Crystal Cave were formed about half million years ago from crystals the size of a grain of salt into the large 50 ton crystals we see today. They were formed under water where the water temperature is a 122°F (keep in mind water boils at 212°F at sea level). When the miners discovered the caves in 2000 huge pumps were put in place by the miners to pump out the water from the cave at a rate of a million gallons every hour to keep the caves dry. Unfortunately, the local authorities eventually will turn off these pumps and these caves will be lost forever.

The crystals are made of gypsum, a mineral commonly used in drywalls. Since gypsum is a slow growing crystal, these giant gypsum crystals, found only in Mexico, took a half million years to form in hot water saturated with gypsum. The crystals started from small crystals embedded in the walls and floors and gradually grew from there into the size they are now weighing many tons. Some grew as long as forty-five feet in length over time. Other minerals have been found such as Selenite and Aragonite, a mineral commonly found in marine environment. During the exploration, three other caves were explored, The Cave of Swords, The Cave of Sails, and The Queen’s Eye.

The Cave of Swords was discovered in 1910 and was once flooded, but over the centuries the water had risen and receded several times in cycles called oscillation. The crystals here are similar to the ones found in the other caves but they are much smaller in size. The crystals from this cave can be seen in museums all over the world.

The Cave of Sails has crystal formation similar to those found in most caves throughout the world. This cave lost it water around 1990.

The third cave, The Queen’s Eye, is located about 500 feet from the Crystal Cave’s entrance, was the coolest of the three caves with a temperature around a tolerable 95°F but the humidity level was still very high. The crystals in this cave are large but much shorter than the one observed in Crystal Cave. Pools of water were found there where scientists observed evidence of life such as bacteria and viruses. Under these conditions no higher forms of life such as insects and small animals can survive under these extreme conditions in the caves. There are evidences that there are many caves similar to these under the Niaca Hills.

If it were not for the extreme conditions in these caves, this would have been a very popular tourist attraction and natural wonder of the world to see in Mexico. The unique scenery here would have been something for everyone to see with there own eyes.