The Battle Of Quiberon Bay

The Seven Years War In Brief

The Seven Years War was both a land war between Europe's major powers and a worldwide colonial conflict between Britain and France. It had two separate points of origin.

The first shots of the conflict were fired in North America. Lieutenant Colonel George Washington of the Virginia militia ambushed a party of French Canadian scouts at Fort Duquesne in 1754. This initiated the French and Indian War, a colonial war between Britain and France. In Central Europe, the Seven Years War was a follow up to the indecisive Austrian Wars of Succession, which ended in 1748.

In that war Prussia had proved itself a major military power and, by annexing the wealthy province of Silesia, had greatly enhanced its resources. Austria felt threatened by this and sought to regain Silesia. In May 1756, Austrian Empress Maria Theresa formed a defensive alliance with the Habsburg's enemy, France. Austria was also allied to Russia, another rising military power, having defeated Sweden in the Great Northern War of 1700-1720.

For Britain, a big concern was to defend Hanover, the German state from which the British ruling dynasty had come, against the French. The British government made an agreement to back Prussia in a war over Silesia, in return for their promise to defend Hanover against France- a promise the Prussians proved incapable of fulfilling.

The diplomatic revolution effected by the alliance between Habsburg Austria and Bourbon France in 1756 was seen by Frederick II of Prussia as a preparation of war. Expecting to be attacked by the Austrians the following year, Frederick seized the initiative and launched his own pre-emptive assault against Saxony, a state closely aligned with Austria and the obvious starting point for an invasion of Prussia. Saxony was overrun by Prussia's efficient army, but in response to Prussian aggression both France and Russia agreed to enter the war in support of Austria. Frederick faced a coalition- soon to be joined by Sweden- vastly superior in aggregate manpower and resources. Britain was already at war with France at sea and in the colonies, and only committed to a limited intervention in the European land war to defend the German state of Hanover, ruled of course by King George II against the French.

More On The Seven Years War 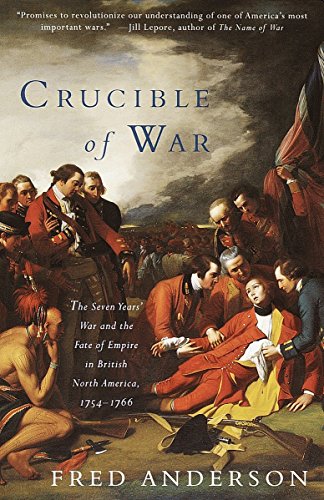 Crucible of War: The Seven Years' War and the Fate of Empire in British North America, 1754-1766
Buy Now

Through the summer of 1757, the war went badly for the British and Prussians. Britain's attempted defence of Hanover failed with the comprehensive defeat of the Duke of Cumberland by the French at the battle of Hastenbeck in July. Frederick was meanwhile in a desperate situation as the Russians overwhelmed East Prussia and French and Austrian armies approached from the west and south. In November and December the Prussian king achieved victories over the French at Rossbach and the Austrians at Leuthen- both skirmishes fought against odds of almost two to one. Exploiting the ability of Prussia's disciplined infantry, cavalry, and artillery to carry out swift marches and complicated battlefield manoeuvres, these encounters were the superlative exhibition of Frederick's military talent.

Rossbach and Leuthen did little more than buy Frederick some time. They did encourage the British, under a coalition government dominated by William Pitt to provide ample financial aid to Prussia, and the deployment of a British and Hanoverian Army of Observation on Prussia's western front was sufficient to hold off the discouraged French. But Austria and Russia continued to attack Prussia with the advantage of having far more men. In August 1758, Russia advanced to within 62 miles of Berlin. A desperate drawn battle was fought at Zorndorf- both the Russians and the Prussians suffered more than 30 per cent casualties.

Key Moment: The Loss Of Minorca

For Britain, the Seven Years War in Europe began with the dispossession of the island of Minorca to the French. The blame for this setback was laid upon Admiral John Byng. Sent with a naval force from Gibraltar to relieve besieged British forces on the island, he had withdrawn after a bloody encounter with a French squadron. Byng was court martialled for failing to do his utmost to engage the enemy and, despite a plea for mercy was executed by firing squad on the deck of HMS Monarch at Portsmouth on the 14th March 1757.

The Price Of Failure

The Battle Of Minden Re-Enacted

For Britain and France, the conflict reached crisis point in 1759. Their war was always mainly naval and colonial. After an initial setback in Minorca at the outset of the war, the Royal Navy had reasserted its superiority, blockading French ports and raiding coastal areas. France planned a seaborne invasion of England and Scotland. This required their Mediterranean squadron to sail from Toulon to Brittany, where it would join the Atlantic fleet and escort troop transports in Britain. The Mediterranean squadron was intercepted and destroyed by Admiral Edward Boscawen off Lagos, southern Portugal, in August. France continued its invasion preparations, but in November its Atlantic fleet was trailed and shattered by Admiral Edward Hawke in an extraordinary battle fought in an Atlantic storm amid the perilous rocks and reefs of Quiberon Bay. Spain was later induced to join France's naval war against Britain, but there was never another serious challenge to the Royal Navy's command of the sea. Coupled with victories in Canada and India, Quiberon Bay made 1759 a triumphant year for the British.

British and Hanoverian forces also defeated the French on land, at Minden, but still Frederick of Prussia fought the Austrians and Russians unaided. Though his triumphs were many, so were his defeats. At Kunersdorf, in August 1759, the Russian commander in chief, Count Pyotr Saltykov, inflicted a defeat so bad that Frederick contemplated suicide, writing: 'I will not survive the doom of my fatherland.' Out of 50,000 Prussian troops involved,19,000 were killed or wounded. In October 1760, the Russians and Austrians briefly took Berlin. In fact, Frederick did not lose the will to fight and went on to defeat the Austrians at Liegnitz in August 1760 and at Torgau the following November.

In 1761 British support for Prussia faltered; Pitt, the force behind Britain's war effort, resigned. As losses mounted, Prussia's administration struggled to find fresh men and money to keep the war going. By the year's end Frederick was again suicidal, attempting to 'preserve for my nephew, by way of negotiation, whatever fragments of territory we can save from avidity of my enemies.' The Empress Elizabeth of Russia died and the pro-Prussian Peter III was crowned. However, within just six months he was assassinated. But, in-spite of his short reign, he still found the time to make peace with Prussia, letting Frederick retake Silesia from Austria. After almost seven years of war, money and willpower were fast running out. Peace was signed in February 1763 between Prussia and Austria and between Britain and France.

The Battle Of Minden

The Seven Years War left the map of Europe largely unchanged, but it had important consequences that were not just confined to the European colonies.

The war confirmed the rise of both Prussia and Russia. France's power was diminished, while Britain was the great beneficiary. The British became the world's leading colonial and commercial nation, having evicted the French from North America and from most of India in its wars in India. France built a new navy, funded by the patriotic French public. The army was also reformed, and soon defeated Britain in the American Revolution.

This was followed by a reassertion of French military might in Europe after the 1789 revolution, both in the French Revolutionary Wars and throughout Napoleon's imperial triumphs on the continent.