The Geology of The Enchanted Rock, Texas

Located a few miles North of Fredericksburg, Texas, the Enchanted Rock is a popular destination for hikers, naturalists, spelunkers, and geologists alike. From the summit there are breathtaking views of the surrounding Hill Country. From Native Americans, to U.S. Cavalry, to tourists from New York, this geologic feature has been viewed by millions.

Satellite View of the Enchanted Rock 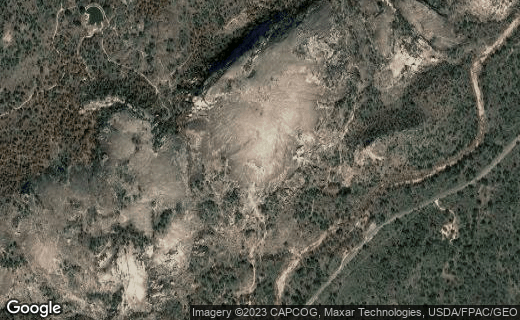 What is the Enchanted Rock?

In geologic terms the Enchanted Rock is a large igneous pluton. Igneous means this rock is a product of cooled magma. Pluton is the term given to a magma chamber that was never erupted. Over millions of years the magma cooled inside the crust of the earth creating a giant piece of rock.

Minerology of the Enchanted Rock

Anyone could tell you the Enchanted Rock is granite, the same thing your kitchen countertop is made of, but what exactly does that mean? The color and texture of granite varies depending on what minerals get thrown into the mix when it is being formed. The particular granite that composes the Enchanted Rock contains a few very common minerals.

As you can see in the adjacent picture, it is possible to discern these minerals simply by observation. Orthoclase, the pink mineral is one of the most abundant minerals in the earth, and makes up most of the Enchanted Rock pluton. Quartz is the clear to grey looking mineral in the Enchanted Rock it is also very common and resistant to weathering. Plagioclase is the white mineral. Plagioclase is a cousin to orthoclase with only a slightly different composition.The black spots are most likely a dark mineral called hornblende. Each of these minerals contributes to the makeup of the Enchanted Rock.The slow cooling process can allow for minerals to grow quite large in plutons such as the Enchanted Rock. Adjacent is a picture of one of the many massive quartz veins that runs through this pluton.

Thankfully, there is currently no volcanic activity at the Enchanted Rock. However, some other major geologic process are still happening. These processes are the weathering and erosion of this granite. As previously mentioned, granite is hard and does resist weathering better than limestone, however this does not mean it does not weather at all.

The picture to the right shows a weathering process called foliation. In the picture you can clearly see the large sheets of granite that look as if they're being broken off the main rock, which they are! Fluctuations in temperature cause the rocks to expand and contract. This eventually causes the brittle (yes brittle) rocks to crack and fracture. Water can then seep into these fractures, and if it freezes (like it did when I visited) the rocks can literally be wedged apart, as water expands when it freezes.

Fractures in the rocks can also play host to a different kind of weathering known as biogenic weathering. This is a weathering process where the breakup of rocks is aided by plants and or animals. Roots can forcibly crack rocks, while chemical changes due to plant life, or animal feces breakdown rocks further.

The main erosional force at the Enchanted Rock is gravity. Once the rocks are weathered from the protolith- or parent rock, gravity pulls them down to the bottom of this pluton. The smaller pieces can also be blown away by strong winds.