Our Arizona Giant Desert Hairy Scorpion: from Pest to Pet

I never have liked scorpions. Even in my childhood weird-insect-pet days, when I had black widow spiders and earthworms and centipedes and lots of praying mantises, all in separate bug jars, I didn't appreciate scorpions. They've always struck me as somewhat malevolent, truth be told: the aggressive way they lift those lobster claws up while coiling that nasty pincer-tail over their backs, or the unwelcome habit they have of locating themselves in that pair of jeans you left on the closet floor last night because you were going to wear them to do chores in the morning. I've heard the stories of the awful things scorpions do to the unwitting victim in the comfort of their own bedroom or while landscaping the yard. Scorpions have always made me recoil -- just before I pick up the nearest blunt object to smash them with.

I live in the desert. Not only do I live in the desert, but I live in a relatively rural area, where only one house separates me from the vast Tonto National Forest. For those of you who do not live in the desert, let me say right up front that the Tonto is probably not like the forest that immediately comes to your mind's eye. The part of the forest near me is desert. There are no pine trees nearby. There are rocks and mesquite trees and cactus, and just about everything stings, slithers, stabs, or bites. The scorpion fits right in.

The scorpion isn't satisfied with all that rocky, rugged terrain. Like the coyote, it is undaunted by houses and our uniquely-human idea of civilization. The scorpion, like that wacky cousin who shows up at odd hours wearing his Hooters ball cap, doesn't realize when he's not welcome. He hangs out on walls, in shoes, and -- while waddling lobster-like along the floor --he's just waiting to prey upon you.

At my previous homes, in closer proximity to the city, I'd see scorpions occasionally. Then I moved farther out. Suddenly, scorpions were ubiquitous. One particularly close call I had was when I'd just washed one of my horses after a ride, and I picked up his front foot to check for rocks. There, perfectly intact in the v-shaped crevice in his hoof called the "frog," was a small blonde scorpion, along for the ride. I dropped the horse's foot, grabbed a rock, and smashed that scorpion into a paste.

Scorpions would turn up on my bedspread, on the carpet, and under every rock. At night I'd take the black-light around, just as my dad would do decades ago, and watch how the desert floor fluoresced green with movement -- scorpions. The thing about these scorpions is you couldn't just spray them and watch them immediately succumb to Raid; no, you had to smash them. They're tough little beggars, too -- you couldn't just smash them once. You had to do an entire scorpion-smashing dance on them. It was a scorpion one-step.

They're everywhere, here at our new home. They may not be under every rock, but that's only because there's probably two of them beneath the next rock. They hang out beneath the tarps that cover the hay; they enjoy the shavings at the barn. Most of all, they love being under the water troughs for the horses. That's all well and good until I need to dump out a water trough so I can clean it. Then they're far too close for comfort.

At the height of summer this year, I was smashing scorpions by the six-pack every day. There was an inexhaustible supply. One morning I turned over a trough and there, boldly confronting me, was the largest scorpion I'd ever seen. I immediately tried to smash him beneath a large rock -- but he ambled away, clearly annoyed. His sheer bulk impressed me; not counting his tail, he was well over three inches long. His claw-span was at least two inches. He was an impressive, unwanted arthropod.

For whatever reason, after decades of nearly subconscious scorpion-smashing, I stopped with the rock still in my hand and admired him. Then I ran to the shed and grabbed a plastic bucket to capture this huge beauty in. I thought I'd show him to my husband before smashing him thoroughly -- the scorpion, not my husband.

I put some sand in the bottom of a large plastic food tub, stuck an aloe vera plant in the center in mocking tribute to the plastic plants so often used in terrariums, and dumped the scorpion inside. I counted his arms and legs and pincers; all were intact. He had survived my attempted smashing unscathed. He ambled about restlessly.

When my husband arrived home, he looked in the plastic tub with clear disinterest. "What's this?" he asked. "Scorpion," I said. "Hadrurus Arizonensis, to be exact -- an Arizona Giant Desert Hairy Scorpion. What should we name him?"

"Uncle Krabby," he said, and walked away, bored. But that night, I caught Krabby some food, and my husband was right there, intrigued, watching the creature snatch the cockroach, sting it, and then eat it without hesitation. From that night on, my husband went on nightly forays to catch food for Krabby. (Desert Hairy Scorpions don't require that much food -- they only require food about every other week. But don't bother telling that to my other half. The day's work is not done until Krabby has been fed.)

Recently, with the cooler weather having arrived, crickets and roaches became hard to find. My husband announced we needed to go to PetsMart. Why? He wanted to buy a box of crickets for Krabby. The irony was not lost on me: normal people pay exterminators to kill the scorpions on their properties. Normal people want the exterminators to kill off all the crickets, too. What do we do? We pay PetsMart for crickets to feed to our scorpion.

I asked him why we'd bother buying crickets -- heck, if the scorpion succumbed, we'd just catch another. He gave me a wounded look. "That's Uncle Krabby," he said, in a tone of reverence. "Look, if he gets too hungry we can just smash him," I said. By afternoon, we were driving home with a small box of crickets in hand. Uncle Krabby must be fed!

One afternoon, my spouse pointed out to me all the great attributes about our scorpion: he doesn't shed, eats bugs, and you don't need to get up in the middle of the night to let him out. If he dies, you can chuck him over the fence. He doesn't need veterinary care, and he won't bark. Until recently, it didn't cost anything to feed him. Still, that $3.00 box of crickets is less than I pay for one can of premium dog food for the furbutts. Krabby is economical. 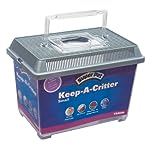 From Pest to Pet.

I have to admit that I've become fond of ol' Krabby. Much to my surprise, he no longer looks so forbidding. Whereas at one time I thought there was nothing so sinister as a scorpion, now they are merely interesting looking. I now realize he doesn't want to hunt me down and sting me in my vulnerable areas; he just wants to be left alone to eat his crickets.

I'm still not fond of the smaller scorpions. They're far more dangerous than Uncle Krabby. His species, the hadrurus, delivers a nasty sting -- about the same toxicity as a bee sting, if you're lucky enough to not be allergic -- but the smaller scorpions (and in the U.S. they're ALL smaller than the hadrurus Arizonensis) will hurt you far worse, and can kill you. The Giant Desert Hairy, though, likes to feast on those smaller scorpions, and as such is quite an ally. They grow to be about five and a half inches long and even feed on small lizards and snakes -- not to mention crickets at three bucks a box.

If you'd asked me two years ago if I'd ever let a scorpion live without smashing it, I would've denied it -- much less to have one in a terrarium in the house. Had you told me I'd pay for crickets, I'd think you're smoking crack. But Uncle Krabby has changed all that. He's managed to inure me to the sight of curled-up stinger and aggressively extended claws. I was even somewhat concerned the day he was lying, motionless, beneath the sand in his habitat -- until I realized he had merely dug out a slight burrow.

For Christmas, Krabby will get a roomy new habitat. He's been a good scorpion; Santa will remember. It's amazing how we can learn to appreciate a creature we once despised.

It's too darned bad for those crickets, though.