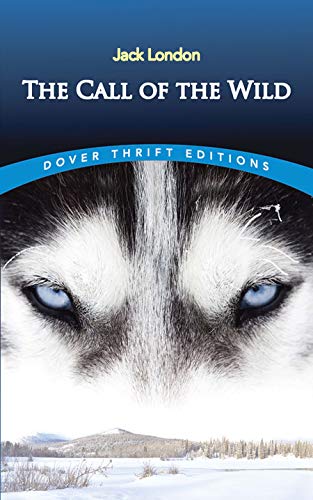 The Call of the Wild
Buy Now

Ever since I have been a child, I have been fascinated by and loved the gray or grey wolf (Canus lupus) in wildlife and have been concerned about preserving this beautiful and intelligent animal. It has nearly become extinct in the lower forty-eight states and is now only growing in number in Yellowstone National Park located in Wyoming as it was reintroduced to the park in 1995.

I suppose my interest stems from the fact that my maiden name is Wolf and our family crest has a wolf head above the armoured head of a knight with shield. W-o-l-f, spelled this way, is a German name and our Wolf family is supposed to have hailed from Dresden, Germany according to my Grandmother Wolf.

Then there are the fairy tales and myths that include a wolf as one of the characters but they are often portrayed to be feared and villainous and dangerous creatures, sneaky and sly, when truthfully this is not the case at all about the gray wolf.

I have read and loved the Jack London stories and novels about the gray wolf he has included as characters in his writings. "To Build A Fire", White Fang, and Call of the Wild are three of my favorite writings by London. I read them as a child and taught them too in my American literature classes. He portrays the gray wolf as loyal, sturdy, intelligent, and a friend of man, not the villain portrayed in the fairy tales.

So throughout my childhood and adult life I have always been interested in the gray wolf and cherished its wolf family because it is one of the few animals in wildlife that mates for life, raises its young for a longer period of time than other wildlife, and surprisingly, does not attack humans unless unduly provoked.

The portrayal of the gray wolf as a 'lone wolf' is actually very rare and most gray wolves are very social, gregarious, and family oriented. 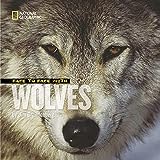 The Life of the Gray Wolf

The gray wolf is native to the wilderness and remote areas of North America, Asia, and N. Africa. Today the gray wolf has been reduced to living in Canada, Alaska, Idaho, Michigan, Minnesota, Montana, Wisconsin and Wyoming.

The gray wolf has been hunted ruthlessly and close to extinction in the U.S. in most of its range today. It is slowly making a comeback to its former habitat because of strong conservation efforts.

The wolf can live in a variety of habitats: the tundra, woodlands, forests, grasslands and deserts. And, the gray wolf has been introduced to Yellowstone National Park in Wyoming and Banff National Park in Canada where they are thriving and flourishing and helping to control the wildlife in those parks.

It is estimated that seven to eleven thousand gray wolves lie in Alaska today and there are approximately five thousand in the lower U.S. states. Approximately two hundred thousand live around the world compared to two million in earlier times. Millions of years ago, the gray wolf lived in N. America during the late Rancholabrian era.

The gray wolf is divided into two categories by wildlife organizations and biologists:

The gray wolf has a winter fur that is long and bushy with a mottled gray color. Its fur can also be pure white, red, or brown to black. It travels at a loping gait and will follow a prey up to thirteen miles if necessary. Its gait can be maintained for hours at about eight to nine kilometers per hour.

Gray wolves' sense of smell is not as acute as that of the domesticated dog, but their hearing is sharper than that of a fox and they will exhibit signs of great distress when hearing low minor chords. Wolves also have great night vision.

The N. American gray wolf is a social animal that travels in nuclear families consisting of a mated pair and their offspring. This is also know and called a wolf pack. The average pack consists of a family of five to eleven animals. The gray wolf is an apex predator throughout its range with only humans and tigers posing a serious threat to it.

They are highly territorial animals and the gray wolf is generally monogamous with mated pairs usually mating for life until one of them dies. When a mated wolf dies, the single wolf pairs with another wolf quickly. Unpaired females are rare as males predominate the wolf family.

A male wolf that does not mate is referred to as a "Casanova wolf" and it is extremely rare for a male gray wolf not to mate. Orphaned wolf pups are usually adopted by another wolf pack but a full grown wolf will not be adopted by a pack.

The male gray wolf will mate with a female usually during January through March and produce wolf pups once a year with the pups remaining with the wolf pack for ten to fifty-four months. The average pack consists of a family of five to eleven animals. The pups leave at the onset of sexual maturity and competition with the pack for food. At this point they leave the pack and look for a mate to begin a new wolf pack.

Gray wolves live in dens located away from prey and violent encounters with other packs. Their pups are usually born in the summer months and they bear large pups in small litters. The pups are born blind and deaf and only begin to see and hear nine to twelve days after birth. The mother wolf nurtures the pups while the father wolf provides the food for them.

The gray wolf, both male and female, is intelligent and research has shown that they can remember, associate events and learn. They are trainable but not as responsive as the domesticated dog. They become bored easily with simple repeated commands and respond more to positive conditioning and rewards rather than to coercive commands and techniques using fear, or aversive stimuli and force.

They respond to hand signals more than voice and they are not as good as sled dogs because they fight for personal space and ignore repeated commands and are easily distracted by other wildlife.

The gray wolf howls only for long distance communication and to keep strangers away from the pack. They hunt within territories usually around fifty to one thousand square miles.

The gray wolf hunt and eat ungulates which are large hoofed animals such as deer, elk, moose and caribou. They will also eat small prey such as wild rabbits and beavers. They are also scavengers and will take food away from another animal in wildlife or take the leftover food.

A gray wolf will target the easiest option to attack for food when hunting. It will stalk and conceal itself as it approaches a deer, elk or moose. Then it will quicken its pace, wag its tail and peer intently getting as close to the prey as possible.

The wolf will not attack a standing prey and will try to intimidate it into running. If the prey attempts to flee, the wolf will pursue and attack it. Therefore, if a gray wolf should ever wander into your backyard, remain perfectly still and it will walk away and not attempt to attack. The wolf only attacks when the prey begins to flee.

Save the Gray Wolf

Today, the gray wolf is making a comeback and reestablishing itself in the Great Lakes region, the northern Rockies and the southwest U.S. Since 1995 the U.S. Fish and Wildlife Service and conservation organizations have reintroduced the gray wolf into Yellowstone National Park.

It has been a successful venture as the gray wolf has helped to keep the elk herds down to size so that they are no longer taking over the park. It has also helped in keeping the beaver numbers down.

The gray wolf once ranged across all of N. America but by the 1930s was nearly extinct because of being trapped, poisoned, and hunted by ranchers, farmers and government agents. The 1973 Endangered Species Act helped to make the wolf population rebound, but the act was nullified in 2011. So the gray wolf needs our help in preserving this intelligent, beautiful and gregarious animal.

Over the last several years, conservation efforts have been stepped up to protect the gray wolf so its numbers will increase.

The conservation efforts have been so good that the U.S. Fish and Wildlife Service in April 2012 changed the gray wolf's status from endangered to threatened. This is based on Yellowstone National Park and Banff National Parks enlarging the number of gray wolves in their parks and their recovery here as been a success.

Even though protected by law the gray wolves remain vulnerable. It is difficult to find places wild enough to inhabit wolves.

The gray wolf is very adaptable, but it has had a long adversarial history with humans. The gray wolf will almost never attack a human. The only time that a gray wolf has been known to attack a human is when the wolf is suffering from rabies or is attacked by a human. They are also vulnerable to ranchers and farmers who are by far their greatest attackers and exterminators.

There are conservation and preservation organizations that look after the gray wolf and help to protect it. This is an intelligent, beautiful animal and if handled correctly can become the loyal friend to man. Just read Jack London.

The Gray Wolf in Yellowstone - by John Muir