The History Of Calligraphy

The word ‘Calligraphy’ means beautiful writing. Calligraphy is the art to make elegant handwriting. Before the invention of printing press, this was the way to make each page of books. Each copy of books was handwritten. A flat-edged pen was used to write.

Today, there are three types of calligraphy-

The art of making pictures modernized with the development of humans. Egyptians played a very important role to develop drawing pictures. In about 3600 B.C, the Egyptians created the hieroglyphics for which they are so well known. These symbols were used inside the tombs of the pharaohs or painted with brushes across papyrus paper. Around 1000 B.C, the Phoenicians created what is now believed to be one of the first alphabets and writing systems. They were seafaring type hence they passed their talent in every seaport they reached. They influenced the Greeks a lot, who later on developed their own kind of writing which by 850 BC the Romans had adapted to suit the Latin language.

Latin was the lingua franca of the churches of Europe in the Middle Ages and the monks (and a smattering of nobility) constituted the only literate members of society. The monks started to write ancient text in books. Since paper was costly at that time, so the monks discovered a new style of Calligraphy which can accommodate more words in a single line. This new style was known as Gothic and lasted as a popular scribing technique throughout much of the Middle Ages.

Based on the Gothic style of the monks, in 15 century, Johannes Gutenberg discovered the printing press. This allowed a faster printing of books. Although the use of printing press was high, the handwriting skill was in demand. Italians during this time invented the italic script, which became popular throughout most of Europe.

One hundred years later, artistic penmanship was in a steep decline.

In 19th century, flat-edge pens were replaced by the fountain pens and steel pens. It became difficult to achieve beautiful curves of calligraphy with these replaced pens due to its rounded tips. The value of calligraphy was going to disappear but a British poet and artist William Morris in the mid-19th century spearheaded a calligraphic revival, reintroducing the flat edged pen and elevating the act of writing to the art form of its past.

The rise of computers!

It appears that the art of calligraphy couldn’t possibly withstand the competition from the 20th century’s most important invention – the computer. With a click of the mouse, a list of various scripts are generated electronically and lasered onto bleached paper in an instant – the art of script preserved in an electronic pulse. But calligraphy is flourishing more than ever with calligraphic societies throughout the world. Computers may print the copies different calligraphy but it does not have the talent to make new styles calligraphy.

A calligrapher’s pen is very important to write a new style of handwriting. It can be flat-edged (can be made of bamboo) or rounded tip pen or can be brush. For some decorative purposes, multi-nibbed pens—steel brushes—can be used. The work of calligraphy has also been done with ball pens. The ink used are water based and are less viscous than the oil based inks used in printing press. 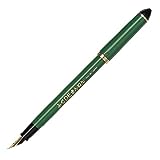