James Finnimore, better known as "Old Virginny" had planned to go back to Virginia one day. He was thought to have killed a man there and he figured that a new found wealth could keep him out of harms way.

"Old Virginny" earned around three thousand dollars from his mining. Most of his money went to the Piaute tribe that he owed money too and his mine went to Comstock and Penrod over drinks at the bar.

He died when he had too much to drink and fell of his horse.

In May of 1850 a man by the name of William Prouse was travelling from Salt Lake City Utah to California in search of gold.

During his journey he encountered bad weather and found himself stranded in the Carson Valley outside of Dayton Nevada. During this time he took out his pan and started to pan for gold in the Carson River.

To his surprise he found a few gold nuggets and named the canyon, Gold Canyon. After awhile the weather settled down and William Prouse continued his journey to the American River California.

As he travelled he spread the news about Gold Canyon to all he met along the way and rumors began to spread like wildfire.

In a period of four to five years, one hundred men started to mine Gold Canyon. They made around two to five dollars a day.

In a period of nine years they were able to mine around $600,000.00 worth of gold. Most of the original hundred men moved towards California. One of the major causes why the miners left was a bluish mud that clogged their rockers and slowed down the search.

Among the miners who stayed were the Grosch Brothers, Allen and Hosea Grosch. The Grosch Brothers sent some of the "bluish mud" to the lab and were surpised to find out that the bluish color was due to the presence of sliver.

The Grosch Brothers wrote a letter to their father explaining their discovery. They did not share this information with anyone else. While mining where Silver City is now, Hosea Grosch hit his foot with a mining pick. He contracted a serious case of gangreen and died shortly afterward.

Allen thought seriously about quitting but his dad told him to keep up the work. Later, Allen went to California for supplies, on his way he encountered a snowstorm and he froze to death.

No one knew of the secret of the "bluish mud" until long after his death.

Many prospectors and district miners came to Gold Hill to look at its prospects and almost all left to find a better score in California.

Mrs. L.S. Bowers was also known as the "Washoe Seeress." She made predictions on the productivity of mines on the Comstock Lode. Most of her predictions came true.

She predicted about Gold Hill, and the Ophir Mine. She hired herself out as a speculator and made her millions through her predictions.

Her husband L.S. Bowers made a name for himself listening to his wife.

Peter O'Riley was a "Hard-working good natured, Irishman," with a bad temper.

O'Riley's temper was the start of the end of his career. O'Riley had fallen deeply in love with an educated woman and being that he could not read or write hired a man named Smith to write love letters.

His agreement ended up a lot like Cyrano de Bergerac and O'Riley and Smith had a duel. Smith was mortally wounded yet O'Riley had been shot in the arm.

After O'Riley recovered her sold his shares of the Ophir Mine and quite his partnership with McLaughlin. Later that year O'Riley was hurt badly in a cave-in. After he recovered he was certified insane and spent the rest of his days in asylum.

Out of all the miners who left Gold Hill L.S. Bowers, Joseph Plato, Henry Comstock, James Rogers, and William Knight stayed behind and formed a partnership. The group mined in the eastern part of Gold canyon and at about ten feet down they found a rich reddish quartz deposit. They called this deposit the Old Red Ledge.

Around this time "Old Virginny" was extremely drunk at one of the local bars when he met up with Henry Comstock, Emmanuel Penrod, Peter O'Riley, and Patrick McLaughlin.

The men bought round after round until "Old Virginny" could hardly walk and then they bought his spring in Gold Canyon, for $40.00, with an old blind horse.

A new miners code had been made in Virginia City that set claims along the Comstock vein that had quartz at 300 feet of claim per person.

O'Riley and McLaughlin placed a claim with Penrod, they measured out 1500 feet and staked it calling the claim the Ophir Mine.

On June 27th 1859 Judge James Walsh handed a handful of blue mud to an assayer. The assayer said that it cost $840.00 a ton. Walsh soon handed the blue mud to another assayer who stated that the mud was full of oxidized silver and was worth $3,876.00 a ton. Not only was the blue mud 75% silver but it also contained 25% gold.

Judge James Walsh joined in a partnership with Joseph Woodworth and bought $5,500.00 worth of shares in the Ophir Mine. They also bought Penrod's shares for the same price. It was this purchace made by the Judge and Woodworth that started the Washoe Gold Rush.

Philip Deidensheimer came to Nevada from Germany to make his millions. After a few years of mining Philip figured out how to re-engineer the timber placement in mines to make mining safer.

This new timber placement was called "Square Step Timbering" and had the timber set into the mine as a square instead of vertically. Philips ingenuity saved millions of lives.

Philip had not properly patented his invention and died bankrupt in 1887.

During the spring of 1860 at least ten thousand miners rushed to Virginia City, 6,857 out of the ten thousand left after seeing the conditions.

The mining was poor and the minerals dug out was all ore. Without the proper machines to smash and refine the ore most of what was removed was useless.

Adolph Sutro and Philip Diedenshiemer built the first machines to refine the ore in Virginia City. After the production of a refinary system the town grew mills, more mines, and factories.

Virginia City became the biggest labor force in the west coast and during the next four years the city enjoyed a bonanza of rich ore.

Between 1860 and 1863 Virginia City mines produced two-million dollars in gold and silver bullion. The richest single mine in the district was the Gould and Curry mine which went for $6,300.00 per "foot."

In 1864 Virginia City mines encountered borasco or barren rock, and in 1870 bankruptcies were filed all over the region and it looked as if the city would be a ghost town.

Late in the 1870's the Crown Point and Belcher Mines gave new hope to the region. These mines dug into the earth at depths of 1,167 feet and at the end of 1874 they hit an immense body of ore, the comstock vein.

The comstock vein was a compound fissure vein, rich in gold and silver, off of the eastern slope of Mount Davidson in Storey County. The vein was 4 miles long and 3,000 feet wide in the middle.

This was known as the Big Bonanza and by 1875 twenty six million dollars worth of bullion was being produced. This amount climaxed at thirty seven million dollars by the end of 1877.

William C. Ralstein owned the famed Bank of California and had sent William Sharon to Virginia City during the borasco.

Sharon lent loans at low rates of 1.5% interest, he lent this money to local mines and mills causing a series of foreclosures and in 1870 Sharon owned most of the mines including the Virginia Truckee. Sharon made Ralstein millions.

Ralstein was unable to acquire the Crown Point and Belcher mines though which put a cap on his earnings.

A group of four men, two saloon owners and two men looking for wealth, bought a mine in 1873 and tapped directly into the Big Bonanza. James C. Flood, William S. Brian, James G. Fair, and John McKay made millions and named themselves the Bonanza Four.

Between the years of 1850 and 1882 the Comstock mines produced three hundred million dollars in gold and silver.

The government passed the Sherman Silver Purchase Act of 1890. This act stated that the government would receive 4.5 million dollars of the silver mined.

In 1890 the comstock was only producing around five million dollars of gold and silver. Most of the mines could not afford to continue paying the Sherman Silver Purchase Act and found themselves closed by the end of the year.

It looked as if Virginia City and other comstock towns were on the verge of becoming ghost towns.

The boom had come and had passed and at one time Virginia City and the surrounding area had been the richest area in the west. 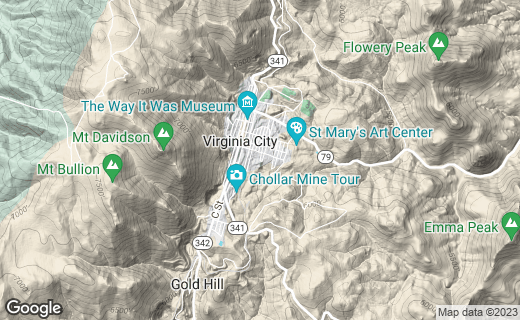